This recipe for cinnamon toast may be the old-fashioned method but it is simple and easy resulting in the best crunchy caramelized sugar cinnamon toast experience. Cinnamon toast is the perfect alternative to French toast, cinnamon rolls, pancakes or crepes.

Any bread is great for cinnamon toast but for a budget-friendly breakfast, brunch, snack, after-dinner treat, or supper use stale or reduced price bread which works beautifully.

Old-fashioned cinnamon toast is briefly baked in an oven, but an easy air fryer method is also included.

Cinnamon toast is in essence simply toasted bread with a mixture of cinnamon and sugar sprinkled over.

Cinnamon toast originates within Europe, most likely Italy or France, and has been enjoyed since at least the 1500s-1600s. French toast was also popular but was more expensive as it included milk and eggs, whereas cinnamon toast was simply bread, cinnamon and sugar.

Toasted bread dates further back to the Roman Empire soldiers who toasted slices or wedges of bread over the camp fire. The word toast originates from the Latin word tostum and translates to mean scorch, burn or roast.

Nowadays, cinnamon toast is not too popular but that's likely just because people have not tried this delicious creation. Recipes for cinnamon toast were more popular back in the early 1900s through to the 1930s.

Cinnamon toast does deserve much more recognition as it has all the tasty flavours of cinnamon buns/rolls with less of the fuss and much more budget-friendly.

Also if you or your family enjoyed the breakfast cereal Cinnamon Toast Crunch, before turning vegan or plant-based, then cinnamon toast is the perfect alternative.

Although there is debate as to whether Cinnamon Toast Crunch cereal is actually vegan or not, as it depends on individuals opinions on Vitamin D3, which may or may not have been prepared with animal ingredients.

There is also a debate as to whether sugar is vegan or not. But if you are in the UK most sugar is suitable for vegans as it is not usually refined with bone char. However, in the US some types of sugar may not be vegan if it has been filtered with bone char.

However, if you are in the US, organic sugar and unrefined sugar is generally vegan. If you are concerned then do contact the manufacturer for guidance.

This recipe for vegan cinnamon toast uses light brown [soft brown] sugar as it caramelizes so well, and the flavours mixed with the cinnamon and crunchy buttered toast is just too divine!

Although any sugar that you prefer can be used for cinnamon toast including granulated, caster, dark brown, demerara, as well as the more nutritious coconut or date sugar.

How To Prepare Cinnamon Toast

Cinnamon toast is the perfect quick, easy, and budget-friendly replacement for French toast, cinnamon buns/rolls and even pancakes/crepes.

Whatever you would usually enjoy with pancakes,etc, can also be paired with cinnamon toast. Or just enjoy the cinnamon toast with a nice cup of tea or coffee.

Any variety of bread or sliced baps/rolls can be used.

Mix the cinnamon powder with the sugar.

Using a toaster, grill or skillet toast each slice of bread until its toasted to your preference.

Place the toasted bread onto a baking tray. Spread each slice with vegan margarine or butter.

Sprinkle generously the cinnamon-sugar mixture over each slice of toast.

Bake for 12-15 minutes until the toast is extra golden and crunchy and the sugar has delicious looking caramelized bits.

Set the temperature to 200F and cook each side for 3-4 minutes.

Exact time will depend on how toasted you prefer your bread.

Once toasted remove the bread and spread with vegan margarine or butter.

Sprinkle over the cinnamon and sugar mixture.

Place the toast back into the air fryer.

Toast one side [cinnamon sugar side upright] for about 4-5 minutes or until its toasted to your likeness and the cinnamon sugar has caramelized parts.

Can leftover cinnamon toast be stored?

Cinnamon toast is best enjoyed soon after preparing otherwise it could loose its crunchiness.

Enjoy at room temperature or pop the cinnamon toast back into a hot oven for a few minutes to heat through. Or crisp up the toast within a hot skillet/non-stick fry pan. A few minutes in an air fryer will also refresh cinnamon toast. 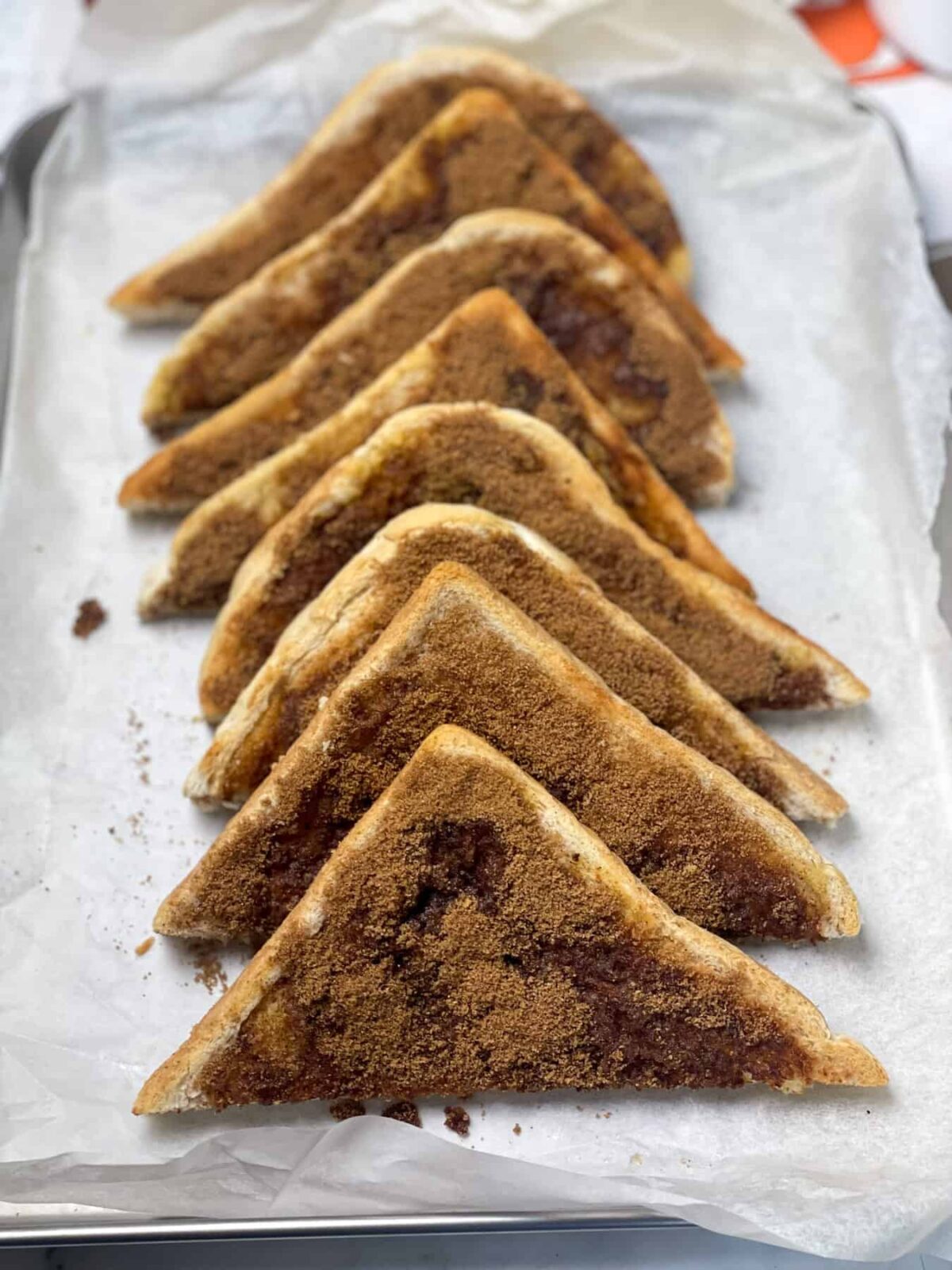 Can cinnamon toast be prepared as refined sugar free?

Any variety of sugar can be used to prepare cinnamon toast.

What goes well with cinnamon toast?

Cinnamon toast is delicious on its own with a nice cup of tea or coffee, or a chilled glass of plant milk, or fruit juice.

However, a few more tasty ideas:

* a scoop of vegan ice cream, whipped cream or a drizzle of pouring cream

I'm not a fan of cinnamon, can I replace it with a different flavour?

A few suggestions: [although do bear in mind that the end toast will taste much different to the cinnamon toast recipe!]

* replace the cinnamon with vanilla essence/extract/powder. Mix the vanilla through the sugar

* replace cinnamon with nutmeg although less nutmeg will be required, about an ⅛ teaspoon

* prepare ginger toast, add about ½ teaspoon initially to the sugar and add a little more if liked

* use mixed spice powder/apple pie spice powder/pumpkin spice powder, about 1 teaspoon to begin, taste to see how strong the flavour is, and add an extra pinch if liked

Do I have to add the margarine/vegan butter to the cinnamon toast?

No, the margarine is not necessary but does contribute to the flavour.

If preferred omit the margarine and just go with the sugar and cinnamon, although the overall flavour will change and the toast may be much drier.

For more delicious traditional vegan baking recipes do check out our growing collection, especially these British rock cakes, and this Weetabix loaf cake, and these tasty peanut butter cornflake cakes. 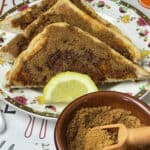 Prepared this tasty cinnamon toast? Pop a comment below and let us know how you got on.