Alternatively, there is also a very similar traditional bake from Yorkshire and the North East of England called a sly cake or cheat's cake.

Fly pie is fun for baking at Halloween as its a simple easy bake that tastes delicious with its buttery shortcrust pastry and sweet dried fruit filling. Although traditionally many families also bake fly pie for the festive Christmas season, as it is a tasty mince pie alternative.

This recipe for Scottish fruit slice is 100% vegan with no butter or eggs required, and definitely no flies harmed in the baking!

Scottish fruit slice is a very popular traditional bake that is likely to be found within any good Scottish bakery, cafe or tearoom. Some versions add a layer of thick water icing to the pastry top for extra indulgence.

What is a Scottish fruit slice?

A Scottish fruit slice, or whatever you like to call it such as a fly's cemetery or even the English sly or cheats cake, is basically a dried fruit filling, lightly flavoured with spices and baked sandwiched between two layers of crispy, buttery soft short-crust pastry.

The Scottish fruit slice was very popular during the 50s, 60s and 70s and was often served as a pudding option for school dinner.

The name's squashed fly pie or fly cemetery refers to the dried fruit filling which is usually currants, raisins or sultanas, resembling dead flies. The fruit slice is traditionally cut into squares which resembles the graveyard.

However, the English version sly pie or cheat's pie dates much further back with a mention in the book Glossary of Yorkshire Words [1855] stating that the fly pie has the unusual name because it looks plain on the outside yet once the surprisingly tasty filling is bitten into, the cheat is uncovered!

Also, many sly pie recipes include figs and nuts such as walnuts, which Scottish fruit slices generally do not include.

How to prepare Scottish fruit slice or fly's cemetery!

To save time making pastry or the fruit filling, shop-bought shortcrust pastry can be used instead, as well as shop-bought jarred mincemeat [the kind intended for festive mince pies].

Alternatively, bake from scratch which is just as fun and easy.

For a quick home-baked fruit slice the pastry and the filling can be prepared one or two days in advance.

Add the flour, salt and vegan margarine/butter to a mixing bowl.

Rub the margarine into the flour, using your fingertips, until it resembles breadcrumbs.

Stir the granulated sugar through the flour mix.

Add 3-4 tablespoons of water and stir for a few minutes until the mixture begins to clump together.

Using the back of the mixing spoon press the mixture together into a dough.

With floured hands bring the mixture into a ball of dough.

Wrap with food wrap or similar and place in the refrigerator for at least 30 minutes to chill.

Add the dried fruit to a non-stick saucepan.

For the dried fruit it can be all currents, raisins or sultanas or use a mixture of the three. I used mostly currents with less raisins and sultanas.

Pour in 150ml of water and stir through 2 tablespoons of sugar.

Bring to the boil and simmer over a low heat for 9-10 minutes until most of the liquid has gone. Stir frequently.

Leave the filling to cool, and once cool stir through one teaspoon of mixed spice powder.

To assemble the fruit slice, first divide the pastry into two pieces and place onto a surface which has been floured.

Roll out one part of the pastry into a piece that will cover the base of your pan.

Line the pan with the pastry.

Use a cutlery knife to trim any ragged edges.

Roll out the second piece of dough into the same size as the first and cover the filling with the pastry.

Press the edges of the pastry together.

Using a cutlery fork crimp around the edges.

Using a knife score out 12 square pieces but be carefully not to slice right through the pastry.

Brush the pastry with some plant milk.

The fruit slice will still be pale when removed from the oven but will have light golden parts especially around the edges, and the pastry will be firm.

Sprinkle the fruit slice with caster sugar, or if that's not available just use granulated sugar.

Leave the fruit slice to cool within the tin.

Once cool use a sharp knife to slice completely the scored pieces.

Enjoy a piece with a nice cup of tea or your favourite beverage. You deserve it!

Many good Scottish folks love a traditional square of fruit slice during the festive season and it is especially delicious on Christmas Eve with a tasty hot chocolate, tea or coffee.

Vegan fruit slice is perfect for the cake tin and any guests will surely love being treated to a piece.

Fruit slice will keep fresh for 3-4 days within a cake or food container.

Or freeze the fruit slice for up to 3 months within a freezer-safe container.

Can I reheat Scottish fruit slice to enjoy warm?

Reheat within a warm oven, microwave, or within an air fryer, until the fruit slice has heated through.

Enjoy with some tasty hot vegan custard for a delicious, satisfying pudding. Or serve with a scoop of vegan ice cream, vegan whipped cream or drizzle with vegan pouring cream [such as Alpro single soya cream].

More traditional and old-school vegan bakes that family, friends and guests will love

Traditional fruit loaf cake [always a winner with everyone even those who dislike fruit cake!] 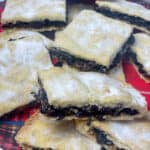 Print Recipe
Scottish fruit slice is an old school dinners bake that is also known as fly cemetery or sly pie.This bake is one that sparks lots of nostalgia in many people as they think back to when there granny, mum, or school dinner ladies would bake this tasty pie. Its certainly one to treasure and keep.
Course Afternoon tea, Party, picnic, pudding
Cuisine British, Scottish
Prep Time 30 mins
Cook Time 40 mins
resting time for pastry 30 mins
Total Time 1 hr 40 mins
Servings 12 Slices
Calories 299
Author Jacq

All comments very much appreciated as are a star rating [find the stars within the recipe card above].

Sharing a photo of your bake on social media?

So we can admire your good baking.