This vegan version of a traditional British treacle tart is deliciously gooey, sticky, and sweet, with notes of butterscotch, candy-floss, caramel and lemon. The sweet shortcrust pastry is buttery and soft with tasty crisp edges.

Treacle tarts are prepared with just a few every-day ingredients yet the result is a classic delicious home-baked treat. Many people have fond memories of enjoying treacle tart and custard for school dinners, or helping their mum or gran bake one for a family treat. Treacle tart is just one of those extra special nostalgic bakes.

This vegan British treacle tart has a simple lemon zest and raspberry garnish which adds freshness that compliments the sweet tart beautifully. However the garnish is entirely optional!

What is a British treacle tart?

A treacle tart is an old-fashioned much-loved British dessert that features a shortcrust pastry crust packed with a simple filling of golden syrup [light treacle], fresh breadcrumbs and fresh lemon zest and juice. Many fancier modern recipes also include cream and eggs within the treacle tart filling, but these ingredients are really not necessary.

Once the filling is added the tart is baked until the pastry is golden and the syrupy mixture bubbling. Treacle tarts can be enjoyed warm or cold.

A common question about treacle tarts, is why they are called treacle tarts seeing as they do not contain any actual black treacle.

However, before golden syrup was invented, treacle tarts recipes were in existence, with the origins being traced back to the medieval times, and its likely honey would have been the syrup of choice.

Also, historically, the word treacle was used to mean any thick syrup that was available, so molasses would also have made an appearance in some older treacle tart recipes.

Another possible reason for the treacle tarts name is that golden syrup was also once known as light treacle, so this may also be the reason for it being called a treacle tart despite no black treacle used in modern recipes.

Interestingly, England cockney [east end of London] slang for treacle tart is sweetheart obviously due to this desserts sweetness. Even more curiously, an old meaning of the word treacle was actually 'poison antidote'!

In one scene Harry is smelling the aroma of a potion and he instantly thinks of treacle tart. In another scene the desserts are being brought out in Hogwarts '' apple pies, treacle tarts, chocolate eclairs and jam doughnuts, trifle, strawberries, jelly, rice pudding..'' and of course Harry chooses the treacle tart.

For a quicker dessert a shop-bought shortcrust pastry dough can be used instead of preparing one at home. However, the following home-made pastry is quite delicious so is well worth the extra step!

Add the flour and baking powder to a mixing bowl.

Drop the vegan margarine into the bowl in chunks.

Stir through the granulated sugar and salt.

Add the water and using a cutlery knife stir for a few minutes until the mixture begins to clump together.

Bring the dough together into a ball.

Knead for a few seconds and then chill the dough in the refrigerator for at least 30 minutes.

When its time to roll the dough, place it on a floured surface.

Roll the dough out to a size that will fit the pie/flan tin, leaving about an inch of pastry overlapping the sides.

Using the rolling pin, roll it firmly over the top edge of the pie tin and this will neatly trim the excess pastry away.

Place the pie tin in the refrigerator to chill while the filling is prepared.

Pour the golden syrup into a saucepan and gently heat until the syrup is runny and warm.

Remove the syrup from the heat and stir through the fresh breadcrumbs.

Pour the filling into the pie case.

Bake for 30-35 minutes until the crust is nicely golden and the filling is hot and bubbling.

The filling will not be completely firm but will firm up as it cools.

Add a sprinkle of lemon zest, if liked.

Once cool and at room temperature the treacle tart will have set and be easy to slice. If you'd like a warm slice leave the tart to cool off a little just so that it sets more before slicing.

Why is it called a treacle tart when the recipe calls for golden syrup?

This question is one of the most asked! As in most UK supermarkets we have mainly golden syrup and black treacle for sale.

Even though golden syrup wasn't available before 1885, older versions of treacle tart have been around since the medieval times. As historically the word treacle was used for any type of sweet syrup.

Can the golden syrup be replaced for a treacle tart?

Can I replace golden syrup with corn syrup?

Corn syrup is thinner in texture, and has a different flavour compared to golden syrup so may not be the best replacement, but it may be worth a try. Do let us know how you get on if you do use corn syrup.

Golden syrup tastes buttery, caramelly, and sweet, with hints of butterscotch and candy-floss.

Do I need to add lemon to a treacle tart?

Of course not. It is traditional to add lemon to a treacle tart as the lemon cuts through the sweetness of the golden syrup whilst complimenting the syrups flavours beautifully.

The lemon zest and juice is not an overpowering flavour it just lends background citrus notes that adds depths of flavour and interesting texture.

However, if preferred simply leave the lemon out of the recipe and perhaps enjoy a slice of treacle tart along with a few slices of your favourite fruit, or just on its own which is equally delicious.

What can I serve with treacle tart?

A slice of treacle tart on its own is a wonderful home-baked treat but it can be served with vegan hot custard, pouring cream, whipped cream, ice-cream, or even some hot berry coulis.

To make an easy berry coulis add frozen or fresh berries to a saucepan along with some sugar, and cook until a hot berry sauce is created.

Also a few fresh berries are a nice accompaniment. 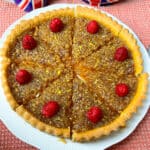 Prepare the pastry: [this stage can be done 1-2 days in advance]

It would be wonderful if you could drop us a comment below and click the star ratings.