Mixed together and chilled within the refrigerator, the result is a similar to a rocky road without the chocolate, and the flavour is light, fresh, not too sweet but irresistibly moreish.

Vegan fifteens can also be easily prepared as safe for gluten-free diets, and if your not a fan of candied cherries these can be replaced with chocolate buttons, your favourite soft candy or even dried fruit.

When my kids were younger and we lived in Northern Ireland I tried my first fifteen in a wee local cafe and the unique texture and flavour was incredibly delicious. We were vegetarian back then but now that we are plant-based and enjoy a vegan diet, I wanted to recreate this tasty teatime treat.

Fifteens are basically a mixture of 15 digestive biscuits, 15 marshmallows, 15 glace/candied cherries, condescend milk and desiccated coconut. No baking is required as the sweet mixture is chilled in a log shape until firm and then sliced into 15 pieces.

The result is similar to a rocky road refrigerator bake but with no chocolate. However, some variations of fifteens do include sweets/candy such as chocolate Maltesers which replace the candied cherries.

Although Starbucks in Northern Ireland has got in on the act and started to sell fifteens, although they are square shaped rather than the traditional more circular oval type shape.

It is amazingly simple to prepare vegan fifteens as the main ingredients just need to be replaced with a vegan version.

The main brand McVities Digestive plain biscuits are now suitable for vegans as they have recently removed the ingredient skimmed milk from the recipe.

However, do check the ingredients on the packets of biscuits before purchasing as recipes are prone to change from time to time.

If you would like to prepare gluten-free fifteens then choose a gluten-free digestive biscuit. I have linked to a gluten-free variety within the recipe below, that can be found on Amazon, UK. However, you could probably find the same brand in your local health store or shop, or supermarket for cheaper.

There are also vegan condensed milk options available and these can be found in many supermarkets.

The one I used was Nestle Carnation vegan condensed milk simply because this was what was available, as I am limited in what ingredients I have access to as we live in rural Scotland far from any large supermarkets. A bonus of this vegan condensed milk is that it is also gluten-free.

How To Prepare Vegan Fifteens

Fifteens are traditionally moulded into an oval sausage roll shape before being tightly wrapped and chilled.

However, for an alternative easier method simply press firmly into a lined baking dish and chill.

First grind the digestive biscuits into crumbs. Use either a food processer and whizz or pulse until fine crumbs, or place the biscuits into a food or freezer bag, seal, and bash with a rolling pin or can of food until crumbed.

Slice the cherries in half and the marshmallows into 3-4 pieces.

Pour in the vegan condensed milk and stir until the mixture clumps together.

Scatter the desiccated coconut over the food wrap.

Firmly shape the mixture into a thick log shape in the mixing bowl. It should be easy to pick it up in one piece.

Place the fifteen mixture onto the coconut and mould the mix firmly together into a thick long log shape. Scatter the top with desiccated coconut.

Lift the food wrap and wrap it tightly around the log several times.

Place in the refrigerator to chill for at least two hours or preferably overnight.

The fifteen log will be very firm once chilled completely.

Fifteens can also be frozen for 3-4 months, well wrapped with cling film/Seram wrap or parchment paper. A second layer of kitchen foil will provide extra protection against freezer burn.

Unwrap and place in the refrigerator to defrost, or unwrap and defrost to room temperature.

Why are fifteens called fifteens?

The main reason that this Irish no-bake cake is called fifteens is the ingredient pattern of having 15 digestives, 15 marshmallows and 15 cherries. Also that the fifteens are sliced into 15 portions.

However, as many people like to have a classic fifteen minute tea or coffee break and the fifteens are intended to be enjoyed along with a cup of tea, then possibly they also got the name from the fifteen minute break idea.

What are digestive biscuits?

In the UK a biscuit tends to be something that is crunchy, crumbly and perfect for dunking into a cup of tea.

Digestive biscuits or sweet-meal biscuits are popular within the UK and are a plain style of British biscuit or cookie that are prepared with wholewheat or brown flour.

In the US a biscuit is closer to a British scone in texture and appearance, and a cookie is what the US would likely call a British biscuit!

Digestive biscuits actually originate from Scotland and was invented by two Scottish doctors in 1839 with the aim of creating a biscuit that would be a useful digestive aid. Bicarbonate of soda featured within the biscuits as they were believed to help neutralize acids within the stomach.

Can the digestive biscuits be substituted?

Yes. Any variety of plain crunchy biscuit can be substituted for the digestives. Although do avoid using biscuits that have a cream filling as they may not grind to a fine crumb and could result in the fifteen mixture becoming too moist.

For the US and other countries digestives may be difficult to source or may be too expensive if sold within British speciality stores, so a vegan-friendly Graham cracker could be used or a similar biscuit/cookie.

Do fifteens need to have glace or candied cherries?

Of course not. Many people dislike candied cherries so these can be replaced with another dried fruit or perhaps some vegan chocolate buttons/drops or chips.

Soft vegan sweets or candy can also replace the cherries such as Jelly Tots.

Although if you do like candied cherries, they do come in different colours such as yellow and green as well as the most common red.

The green candied cherries would be perfect for fifteens that are for a St Patricks Day celebration.

Can fifteens be prepared as gluten-free?

Do check out our growing collection of delicious vegan baking recipes for more traditional baking ideas.

Especially yummy and easy are these British Jam tarts, and these iconic old-fashioned oatmeal raisin cookies, and the ultimate family favourite coconut and jam sponge traybake which is wonderful enjoyed with hot vegan custard. 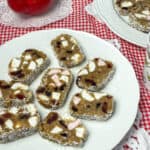 Print Recipe
These tasty fifteens are not too sweet but are fresh, light and incredibly yummy. Enjoy as a treat along with a nice cup of tea or coffee. A batch of fifteens always look amazing as part of a party, buffet or picnic spread.Not a fan of candied cherries? Simply replace the cherries with vegan chocolate buttons, dried fruits such as apricots or dates, or your favourite vegan soft candy/sweets such as Jelly Tots.
Course after dinner treat, Afternoon tea, Party, picnic
Cuisine British, Irish
Prep Time 20 mins
Cook Time 0 mins
Refrigerator bake 2 hrs
Total Time 2 hrs 20 mins
Servings 15 slices
Calories 142
Author Jacq

It would be wonderful if you could pop a comment below and let us know how you got on with the recipe.