Vegan Jamaican coconut rock cakes or buns are an adaption from traditional British rock cakes, with the main difference being the addition of coconut.

This post is a follow on from my main British rock cake recipe and as such all the information within the British rock cake post is relevant for this recipe so please refer to that post for recipe notes and FAQs.

The addition of coconut to British rock cakes are an ingenious touch and these little delicious buns are one of my favourite ever bakes for enjoying with a cup of afternoon tea.

Three ingredient Christmas cake (so delicious and ridiculously easy recipe and not just for Christmas. Perfect for a base for an Easter Simnel cake or a Mothers Day cake) 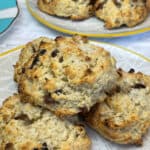