These little vintage American Ting-A-Lings are a vegan adaptation of the much-loved candy from the 1950s.

Traditionally Ting-A-Lings were prepared during the festive season of Thanksgiving and Christmas, but really these delightfully crunchy chocolate snacks can be enjoyed for parties, picnics, buffets, movie nights, watching the big game on TV, or for Halloween decorated with little jelly eyes or the Fourth of July with red, white and blue sprinkles.

Ting-A-Lings are a traditional no-bake American candy that is prepared during the festive season most notably Thanksgiving and Christmas.

Ting-a-lings are similar to chocolate haystacks or chocolate cornflake cakes, rice crispy treats or squares and the Australian hedgehog treats or slice.

The main ingredients of ting-a-lings are breakfast cereal, nuts or raisins, and chocolate. Vanilla is sometimes used as an additional flavouring, and butterscotch chips are often added.

If you can source vegan friendly chow mien noodles then do give those a try with this recipe. I would love to know how you get on.

Although the chow mien noodles are not the same as ramen noodles as such, but are similar to those deep-fried gram flour noodles found in packets of Bombay mix [snacks].

There is a recipe for Wheaties Ting-A-Lings in the Betty Crocker Picture Cookbook General Mills Inc (1950) which simply features Wheaties breakfast cereal mixed with chocolate. A variation Peanut Ting-A-Lings adds salted peanuts to the mix. In the UK Wheaties are similar to malted wheat cereal.

For extra flavour salted, roasted or toasted nuts of any variety can be used instead of almonds. I simply had some plain almonds to use up and also wanted something less salty, but salted or roasted peanuts would add more flavour and texture.

For my next batch of vegan ting-a-lings I am going to try adding some chopped up vegan tablet[traditional Scottish sweet/candy], which would be a great replacement for butterscotch chips which many recipes include, and omit the coconut.

Vegan ting-a-lings are crunchy, chewy, nutty, chocolatey and pleasantly not too sweet due to the dark chocolate. My daughter commented that they tasted like Christmas so I was happy with that seeing as ting-a-lings are a traditional festive treat!

Although ting-a-lings can be jazzed up for any occasion, such as some jelly eyes for Halloween and create scary spider shapes, or red, white and blue cake sprinkles for Fourth of July festivities, or press in mini chocolate eggs before the chocolate sets, for Easter.

For Christmas a dusting of icing/powdered sugar can give the ting-a-lings that extra festive touch.

How To Prepare Vintage Vegan Ting-A-Lings

For this recipe Tesco's High Fibre Bran cereal was used as it is inexpensive and vegan-friendly.

For the chocolate Co-Op's Fairtrade own brand of dark chocolate is used as it is relatively inexpensive, tastes great, is accidently vegan, and melts really well.

I have chosen to use plain almonds to keep the salt levels down but for extra flavour and texture salty or roasted peanuts, or any type of nut, can be used instead.

I am experimenting with vanilla powder at the moment, so have added this instead of vanilla extract, but of course extract or essence is perfectly fine. Almond extract would be particularly nice.

Place the chopped almonds [or your choice of nut/dried fruit such as raisins], bran cereal, desiccated coconut and vanilla extract or vanilla powder, into a mixing bowl.

Melt the chocolate and pour it into the mixing bowl.

Give everything a good mix so that the ingredients are all coated well in chocolate.

Using a teaspoon, scoop up and drop dollops of chocolate mix onto a tray lined with baking parchment.

Use up all the chocolate mixture, the mix should make around 18-20 little ting-a-lings.

The ting-a-lings can also be placed into mini cupcake cases.

Place the tray into the refrigerator to set hard. Once set the ting-a-lings are ready to enjoy.

If preferred, remove a few ting-a-lings and leave at room temperature for a short while to soften slightly so that they are not so hard.

Store ting-a-lings within a covered container and place in the refrigerator for up to 5-7 days. Wrapping in kitchen foil will help keep the candy fresher for longer.

Yes. Wrap well with a layer of baking/parchment paper or kitchen foil and place into a freezer proof bag or container. Freezer for up to 3 months.

Can I prepare gluten-free Ting-A-Lings?

This recipe uses Tesco High Fibre breakfast cereal as an All-bran replacement, however the high fibre cereal is prepared with wheat so is not gluten-free.

Can I make any variations to this Ting-A-Ling recipe?

Yes. There are many variations of this recipe.

Why are these sweeties called Ting-A-Lings?

I honestly have no idea! I have researched this question but can not find any definitive information about why theses little crunchy candy is called the quirky name ting-a-lings.

Although according to The Merriam Webster online dictionary, a ting-a-ling is the sound of bells tinkling so as the candy is a festive treat, its not that far of a stretch to imagine the candy represents little Christmas bells.

For another recipe to use up some of your high fibre bran breakfast cereal check out this delicious All Bran Cinnamon Loaf Cake. 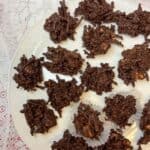 Do let us know how you got on by leaving us a comment below.