How to make the best bowl of Scottish porridge or oatmeal is a quick guide that will have you bubbling up a traditional breakfast that is thick, creamy, and packed full of plant-based nutrition.

These recipes are based on the porridge I enjoyed as a child growing up in Scotland.

Oats are so underrated but are incredibly versatile, inexpensive, nutritious and delicious.

Oats have been prepared into some sort of gruel since the hunter-gather stone age times especially in the European and African area.

A definition of porridge from 1530 describes porridge as a thick meal of vegetables. Meat would have been added to the porridge if affordable. This description actually relates to pottage which was a common sloppy meal especially with poorer people. My daughter is a medieval fan so I happen to have a fun, interesting recipe for pottage that is perfect for a Halloween medieval style meal.

By the 1640s porridge was a meal popular in Scotland which consisted of oats cooked with milk or water with veggies added such as peas.

The soil of Scotland is particularly good for growing oats which is why it eventually became a staple food. Whereas in England by the 1700s oats was mainly regarded as only fit for horse food!

Getting the porridge ingredient ratio correct

For something so simple as a bowl of traditional porridge it can be difficult if you don't get the ratio of oats to liquid quite right.

Some prefer their porridge to be thick, with almost all the liquid gone and the spoon standing up in the middle of the bowl! Whereas a bowl of Scottish porridge is creamy, thick but still easily stirred.

However, once you have a good recipe oatmeal is an easy dish and you can play around with it to achieve the best texture and consistency that you prefer.

Traditional porridge is seasoned with salt

Traditional porridge or oatmeal tends not to be sweetened with sugar or a healthier syrup such as date or maple, but I do prefer to use some sugar. Usually some soft-brown sugar, demerara or date sugar.

Staunch traditionalists would simply add a pinch of salt at the end of cooking, and would never entertain the thought of adding sugar.

There are two types of porridge that I make for my family on a regular basis. One type uses pinhead oatmeal/steel-cut oatmeal. The second type of porridge is prepared with rolled oats or old-fashioned/Scottish oats as its popularly termed in Scotland.

Pinhead/steel-cut oatmeal is different from the usual rolled oat flakes, but both are usually found in the same aisle within supermarkets and grocery stores.

Pinhead oatmeal is the inner kernel of the whole oat or groats.

The outer husk is removed and the groats are sliced with steel to form 2-3 pieces of oatmeal.

A bowl of cooked oatmeal is a more rustic experience as the texture is more grainy and nutty but delicious non-the-less.

Quick cook or rolled oats are also de-husked oat groats, but have been steamed and then rolled into flat flakes with a rolling machine.

Old fashioned/Scottish oats are rolled oats that have been rolled and sliced into thicker flakes than ordinary rolled oats.

I have provided recipes for both types of traditional porridge as my family enjoy both varieties. Try each recipe and see which one is your favourite.

Versatility of a bag of oats

I always think that if you have a bag of oats at home then you'll always a have a quick meal available.

Porridge is not just for breakfast. Try a nourishing bowl for lunch, dinner, supper or even for a snack when your extra hungry.

Other delicious recipes that highlight oats:

What can I add to porridge or oatmeal?

Do you have any flavour combinations that are particularly tasty?

Usually I just wing it and add anything that I fancy and have to hand. But a few tasty combos are:

Is porridge just for breakfast?

Porridge is perfect for breakfast but also makes for a quick and easy lunch, dinner or supper meal. I often have a bowl of porridge for dinner whenever I am too tired to prepare anything else.

I generally add a tablespoon of flax meal, a tablespoon of bran, blueberries or bananas, and sprinkled with nuts, seeds or coconut. A slice or two of wholemeal toast adds more nutrition and ensures that I am filled up for many hours.

I would think this meal is much more valuable, and doesn't take much time or effort, compared with sticking a frozen pizza in the oven.

Can I make a savoury porridge?

It may sound strange but savoury porridge has been around in Scotland for a long time, since at least the mid 1600s.

Try adding one or several of these ingredients to your porridge at the beginning of cooking:

Top your savoury porridge with:

Use your imagination and flavour preferences to create unusual, amazing bowls of savoury goodness. Perfect for those who are not keen on sweet breakfasts.

Leftovers can be cooled and enjoyed chilled or reheated in a saucepan. Add a little extra plant-milk or water as porridge becomes really thick when it cools. Gently simmer for 2-3 minutes.

Or reheat in a microwave.

I often give my dogs plain leftover porridge or oatmeal as they love it and its a nutritious food for dogs.

What is the best plant-milk to prepare porridge? Do I really need to add plant-milk?

If preferred porridge or oatmeal does not actually need any type of milk. Simply replace the milk with additional water. Plant-milk simply makes the porridge more creamy and flavourful but I have often just used water whenever I was short of plant-milk. With perhaps just a small drizzle of plant-milk before serving.

The plant-milk that I tend to use most is oat or soya milk. I find these milks extra creamy although cashew, almond, hemp, rice or another type of plant-milk are all fine.

Dried plant-milk can also be used (such as dried coconut milk/dried soya milk), just follow the instructions on the packet to make up the required amount of liquid for the recipe.

Surprisingly using plant-milk is not a modern invention but actually a traditional ingredient.

Almond milk was a popular medieval ingredient, that was used in place of animal milk for cooking and drinking. During medieval times cows milk was not heat treated to kill bacteria and germs so would often made people unwell.

Also during medieval times the church dictated when people could consume meat and dairy, and so almond milk was frequently made in ordinary households who could afford the almonds.

So whenever someone makes fun of your plant-milk you can inform them that plant-milk has been around for hundreds of years! 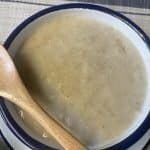 Print Recipe
An incredibly simple and easy recipe for a traditional bowl of Scottish porridge straight from my Scots kitchen. I grew up on delicious, satisfying and comforting porridge. Oats are one of the most underrated ingredients but so valuable and versatile for vegan and plant-based diets.This recipe serves 1 big bowl but is easily doubled for more servings.
Course Breakfast, Dinner, Lunch, Snack
Cuisine Scottish
Prep Time 3 mins
Cook Time 8 mins
Total Time 11 mins
Servings 1 big bowl
Calories 203
Author Jacq