Oil-free vegan Scottish oatcakes are perfect for those who are looking to reduce their oil-intake.

Fourteenth century Scottish Highland soldiers would prepare oatcakes by just mixing oatmeal and water so it stands to reason that an oil-free oatcake would just be a bit more rustic than the oatcake we have come to expect in modern days.

Scottish oatcakes are ideal for breakfast, light lunches and snacks. As well as perfect for dunking into your favourite soups and stews.

Oil-free Scottish oatcakes have less ingredients and are more suited for those wishing to limit their oil and fat intake, as well as their sugar and salt levels.

The third recipe is for oil-free vegan Scottish Cheesy oatcakes and these oatcakes have the addition of nutritional yeast flakes and are especially delicious.

These oil-free oatcakes are super easy and have just two essential ingredients: pinhead or steel-cut oatmeal and boiling water. The salt is optional but does add extra flavour. The boiling water can be replaced with vegan veggie stock for extra flavour if preferred.

To begin the hot water is mixed through the pinhead oatmeal and brought together into a warm oatmeal dough.

The dough is rolled out thin before biscuit or cookie cutters are pressed in and circle oatcakes are formed. The uncooked oatcakes are baked in the oven until lightly tinged golden at the edges.

The oatcakes crisp up as they cool on a wire rack. Once cool the oatcakes are ready to go!

If you prepare this recipe do pop back and leave us a comment below as we love reading feedback and hearing from you.

How do I store oil-free vegan Scottish oatcakes?

Store oatcakes within an airtight container for up to 7 days. Oatcakes may be last a few days extra if stored properly. A layer of kitchen foil covering the oatcakes can help maintain the freshness and crispness for longer.

Can I freeze oil-free Scottish oatcakes?

Wrap well with freezer and food safe wrap and store in the freezer for up to 3 months. Remove the wrap and defrost at room temperature.

Can I still eat oatcakes that have lost the crispiness?

Of course. If the oatcakes are still fine otherwise, then pop the oatcakes in a hot oven (cooking temperature) for about 5-10 minutes.

Allow to cool and firm up.

What can I serve with oil-free Oatcakes?

* broken oatcakes can be used in place of croutons

* sub oatcakes into a recipe instead of tortilla chips

Can I use rolled or porridge oats to prepare these oil-free oatcakes?

Unfortunately rolled oats, quick-cook or porridge oats do not achieve the same texture or flavour as authentic oatcake.

Oatcakes need to be made with pinhead oatmeal/Irish oatmeal or steel-cut oats.

Do you have any top tips for rolling our oatcake dough?

I cover lots of useful tips for preparing oatcakes over on the main post traditional Scottish oatcakes. Do pop over and check those out as they are incredibly helpful. 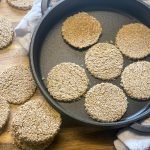