This old-fashioned vegan spice applesauce cake is easily prepared in one bowl. All the every-day pantry ingredients are dumped into one bowl, quickly mixed and then baked. The cinnamon butter cream frosting is also super fast as the ingredients just go into the bowl together and are whipped for a few minutes.

So simple yet the flavours and textures are amazingly moist, fluffy, light and beautifully spiced. While the cinnamon frosting just takes the cake to another tasty level. This family favourite is 100% vegan with no eggs, butter or dairy required yet no-one will ever know.

Enjoy for Thanksgiving, Afternoon tea, or over the Christmas festive and Holiday season. Or just because you fancy a tasty home-baked vegan treat with a nice refreshing cup of tea.

This vegan spiced applesauce cake is adapted from an 1950s Stork margarine recipe that was found in an old vintage recipe booklet. The cake was titled Apple Spice Cake and was not vegan as it contained eggs.

What is an applesauce cake?

An applesauce cake is a simple cake which has applesauce as its main component, along with flour, sugar and a fat such as butter, margarine or oil. Spices can be added to provide warm flavours which compliment the pureed apples. Also dried fruits and nuts can be added to add extra tasty textures.

Applesauce cake originates way back to the New England American colonies sometime during the 17th-18th centuries. When the colonists arrived in the New World the only apples available was from the crab apple trees which produced small wild bitter fruits. However, the colonists brought apple seeds with them which eventually provided useful crops of sweet apples which were perfect for cakes.

John Chapman, more commonly known as Johnny Appleseed, greatly contributed to the development of apple trees in the New World. Johnny Appleseed is an American folk hero as during the early 1800s he travelled around America with his apple seeds, with the mission to establish as many nurseries of apple trees as possible.

Also, many applesauce cakes were baked during the World War Two era where it was known as War Cake in the UK, America and Canada. As well as saving eggs, butter, and dairy, applesauce cake could make good use of windfall apples. The apple sauce provided sweetness so less sugar was required saving the precious sugar rations.

Nowadays, many people have a beloved family applesauce cake recipe handed down through the generations, that when baked brings back nostalgic, fond memories of loved ones. Although many modern recipes now add eggs and butter, they are not really necessary for a light, moist and delicious applesauce cake.

Applesauce cake is such a delicious bake, more so than you may first imagine. It is the perfect home-baking cake to share with friends, family and work acquaintances. Also it is the perfect vegan cake to donate to cake sales, or to enjoy for dessert for a special meal or dinner party.

If you or a family member are not fans of traditional fruit cake during the festive and holiday seasons, then try this old-fashioned spiced applesauce cake as a Christmas cake alternative. When my daughter had her first bite of applesauce cake she immediately exclaimed ''It tastes like Christmas!''. And I have to agree!

I first wanted to bake an applesauce cake after watching The Walton's movie The Homecoming: A Christmas Story [1971], which is set in depression era US, and the mother Olivia Walton baked an applesauce cake for a Christmas treat. Although Olivia's cake featured a whisky frosting courtesy of the Baldwin sisters bootleg whisky recipe! If liked, the vanilla and water for the cinnamon buttercream frosting could be replaced with whiskey or bourbon.

Both the applesauce cake and the cinnamon buttercream frosting are prepared with the simple all-in-one bowl and mix method. So simple and quick.

Stir well to ensure the ingredients are all incorporated.

Scoop the cake batter into the baking pan.

Cool on a wire rack before decorating.

Either sprinkle icing [powdered] sugar over the top and slice into 9-12 portions or prepare a cinnamon buttercream frosting.

For the frosting simply add the margarine, icing sugar, vanilla essence, cinnamon powder and a tablespoon of water to a bowl and use an electric hand whisk or similar to whizz to a smooth, thick frosting.

Or roll your sleeves up and mix by hand!

Scatter a few chopped walnuts over the top.

Enjoy a slice of vegan spiced applesauce cake with a tasty cup of your favourite beverage.

Applesauce cake has notes of delicious carrot cake as well as gingerbread cake, and is reminiscent of coffee cake, so if you like those flavours you'll especially love applesauce cake.

Applesauce cake can be stored at room temperature within a cake tub/display/container for 3-4 days. Also wrap in parchment paper/baking paper if preferred for additional freshness.

If your house is very warm it may be best to store the cake within the refrigerator especially if it has been frosted with the cinnamon buttercream topping.

Alternatively store within the refrigerator wrapped in a layer of parchment paper and a second layer of kitchen foil for up to 5 days.

Unfrosted cake can be frozen for 3-4 months, well wrapped. The frosted cake can also be frozen but the icing may get smudged and the texture may be affected, so its best to frost after the cake has been defrosted.

Do I have to add the cinnamon buttercream frosting?

If preferred omit the cinnamon and just go for a vanilla frosting.

Or go even simpler and finish the cake with a traditional dusting of icing [powdered] sugar.

Although the frosting is highly recommended, as it does take the cake to another tasty level, especially if the cake is for a special occasion.

Can I add a vegan cream cheese frosting to applesauce cake?

I went for a vegan buttercream frosting as I was aiming to keep costs down as vegan cream cheese is rather expensive where I live on a Scottish island, and so instead I opted for Stork baking spread for the frosting. The Stork spread actually works really well for frosting.

You can use ordinary applesauce from a jar or tub, even the ones intended for savoury dishes such as Colemans Bramley Applesauce, or a vegan friendly store brand version.

Although, if the apple sauce is chunky or has cubed apple pieces, it is best to blend it smooth or at least give it a good mashing, as the apple pieces could affect the cake texture.

Additionally, many health shops or wholefood stores sell apple puree which is just 100% apples pureed and this is also perfect for applesauce cake.

However, home-made applesauce is just as good. Simply chop peeled apples and add to a saucepan with a few tablespoons of water or apple juice, and cook until the apples are very soft. Either mash well until smooth or use an immersion stick blender. Once cool, the apple sauce or puree can be used for recipes.

Leftover shop or home-made applesauce or puree can be frozen in ice cube trays, then once frozen pop them out and add to a freezer bag or tub. 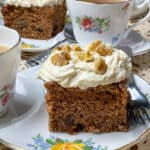 Frosting: [optional as can simply sprinkle with powdered/icing sugar]

We would love to know how you got on, so do leave us a comment below and click the star rating above in the recipe card.