This traditional British vegan Eve's pudding is one of my family's favourite baking recipes. The apples are sweet, tangy with a pleasant bite while the sponge has delicious sweet cinnamon and lemon notes.

Serve with vegan hot custard, ice-cream, pouring cream, whipped cream or yoghurt for the ultimate dessert that is great for weeknights as well as dinner parties.

Its just so easy to prepare and have a tasty pudding ready in such a short space of time. Eve's pudding is ideal if you have a pile of apples needing used up or manage to score a reduced bag from the supermarket.

Not a fan of apples? Simply replace with your choice of fruit!

Vegan Eve's pudding is crisp and golden on the top, with a soft, sweet cinnamon lemony sponge and a juicy sweet-sour apple base.

Although the type of apples used will ultimately change the flavours. Which I love as then each time I bake this British pudding it can taste slightly different.

Serve hot from the oven with some plant-based custard, cream or ice-cream. Or enjoy a wedge on its own. It's so yummy!

In the unlikely event that you have leftovers they are just as delicious the next day. Even served cold for a quick breakfast.

Looking for a pudding to serve to guests? This Eve's pudding is perfect as its warming, comforting and delicious. And as it can be prepared and baked quickly you'll have more time with your guests.

What is British Traditional Eve's Pudding?

Eve's pudding is essentially a Victoria-type sponge with stewed apples cooked underneath the cake.

The origins of todays Eve's Pudding goes all the way back to 1824 Britain.

The Eve in the title refers to Eve from the Bible.

Although the first Mother Eve's Pudding was prepared with pieces of bread and suet.

Nowadays Eve's pudding is not so common but this dessert is so tasty, simple and family-friendly that it deserves to be revived and baked.

How do I store vegan Eve's Pudding?

Leftovers can be stored in the fridge, within a covered container, for 3-4 days.

This pudding is delicious chilled but if preferred reheat in a warm oven for a few minutes.

Can I freeze Eve's pudding?

Eve's pudding also copes well with being frozen. Simply place in a freezer-proof container and freeze for 4-6 months. Defrost before enjoying and reheat if preferred.

What can I serve with vegan Eve's pudding?

The traditional accompaniment for Eve's pudding is hot custard.

You can find an easy vegan custard recipe over on my old school dinners jam and coconut sponge recipe.

Alternatively serve with some vegan cream, yogurt, or ice-cream. When I was little, growing up in Scotland, if we didn't have cream or custard for apple pie or other hot desserts, my mum would just pour over a little milk.

A little splash of plant-based milk would work well with this pudding.

Or enjoy a slice on its own. It's so good it can carry its own!

Can I replace the apples with a different fruit?

Fruits such as pears, nectarines, plums, and peaches work well as substitutions. A combination of these fruits would be really tasty. Follow the recipe as per the apples for these types of fruit.

Fresh or canned pineapple chunks could be used and will not require extra stewing. Just add to the baking casserole.

Fresh or frozen berries can be used but just keep in mind that berries may release more liquid as they cook so don't add any water to them. Also they won't require extra stewing.

Try adding some berries on top of the stewed apples after you place the apples in the baking dish. If your berries are really sour perhaps mix some sugar through the berries.

A few dried fruits scattered over the stewed apples or fruit will add interesting texture and flavour. 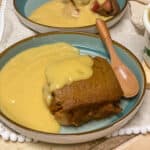 For the sponge topping:

For the apple base: