This slow cooker steamed spotted dick pudding is a classic British dessert that is prepared using plant-based vegan ingredients. The result is an incredibly light, sweet and comforting pudding with fresh lemon notes. And no suet necessary!

Enjoy a delicious bowl of spotted dick pudding with hot custard, chilled cream or a drizzle of warm syrup.

Spotted dick is a family favourite with an unusual name! But it is simply an old British term which means spotted pudding, with raisins or currants giving the steamed sponge the classic spotty appearance!

This classic steamed pudding has a rather unusual name but the word dick is simply an old English word meaning dough or pudding and the spotted name refers to the currants or raisins that give this pudding the spotty appearance.

In olden English times puddings could be referred to as a puddick or puddog so it is easy to see where the less than charming name spotted dick comes from!

The main ingredients for traditional English spotted dick pudding is beef suet (fat), flour, dried fruit most commonly currants or raisins, sugar, and with many recipes calling for lemon zest or cinnamon. Animal based suet is a hard shelf-staple saturated fat that originates from sheep and cow kidneys.

There is a vegetable suet available [Atora Vegetable Suet] that can be used for spotted dick with great results. But here in the UK vegetable suet tends to be an expensive ingredient compared with vegetable margarine.

Although vegetable suet is shelf stable so it is a useful ingredient to have in the pantry.

Also over in the US and other countries suet can be a difficult ingredient to source.

So for this plant-based spotted dick recipe I decided vegan margarine would be more accessible and the result is an incredibly light pudding which is absolutely not too stodgy!

Although it will more than aptly satisfy any cravings for a classic stodgy pudding!

Even though spotted dick is traditionally steamed in a large pot within a pudding basin, the slow cooker is just as good and is arguably better if taking the cost of electricity into consideration.

Also by steaming in the slow cooker there will be much less steam and humidity released into the kitchen which can only be a good thing especially in wet climates!

If you prepare this recipe do pop back and let us know how you got on. We love reading all feedback and comments.

Thanks so much and have a lovely pudding!

How do I store leftover spotted dick pudding?

Leftover pudding can be stored within a covered container and placed in the refrigerator for up to 3 days.

Can I freeze spotted dick pudding?

Freeze within a food and freezer safe container for up to 3 months.

Defrost before reheating or enjoy at room temperature.

How do I reheat leftover spotted dick pudding?

Leftover pudding can be quickly reheated in just a few minutes using a microwave. (If reheating within your pudding bowl do check that the bowl is also safe for microwaves)

Alternatively place the pudding into an oven-safe dish and cover with a piece of kitchen foil and reheat in a hot oven for 10-15 minutes.

What type of pudding basin or dish is best for steamed puddings?

Pudding basins/bowls/dishes come in a variety of materials including stoneware and Pyrex glass. For these types of basins a home-made pudding lid needs to be prepared with greaseproof paper, kitchen foil and string.

There is a useful video that details how to prepare a pudding lid over on the steamed date and syrup pudding recipe post.

There is also a plastic reusable variety with a clip on lid and these are rather handy as no home-made lid needs to be prepared which reduces waste.

Can this spotted dick pudding be prepared on the stove-top?

Steamed puddings are traditionally prepared on the stove-top within a large pot of simmering water that is used to steam cook the pudding.

To prepare spotted dick for stove-top steaming use a heat-proof pudding basin with either a clip on lid or prepare your own lid.

Steam cook the spotted dick for around 2 ½-3 hours.

A small heatproof saucer/plate can be placed at the bottom of the pot, with the pudding basin placed on top of the plate, to prevent too much direct heat on the basin.

However, I tend to miss this step out as my plate tends to rattle too much! Also I much prefer to use my slow cooker to steam cook puddings as it can save electricity.


What can I serve with steamed spotted dick pudding?

Traditionally spotted dick pudding would have a pat of butter placed on top of the hot pudding so that it melts down the sides and then sugar sprinkled over the surface.

* slices of fruit or a tasty fresh fruit salad 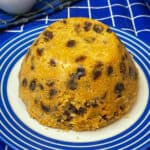