This vegan microwave Scottish Clootie Dumpling recipe is adapted from the Scottish Maw Broons But an' Ben Cookbook recipe, and is 100% vegan deliciousness. The Broons are a famous Scottish cartoon book family, while the but an' ben refers to their holiday cottage which is a hame fae hame, with hame meaning home!

Clootie dumplings are traditionally enjoyed in Scotland during the festive season as well as during the New Year celebrations, and as part of a Robert Burns night meal [25th January 2023].

Slices of clootie dumpling can be eaten as a hot pudding with custard or cream, or along with a savoury meal where the dumpling is traditionally sliced and fried in butter to accompany a cooked breakfast. Or enjoy a wedge spread with vegan butter along with a nice cuppa for a festive treat.

This vegan Scottish clottie dumpling is light, soft, pleasantly spiced, and has hints of toffee, while the outside has a tasty sweet crisp bite.

As the dumpling is cooked within a microwave it has a different shape and texture compare to a clootie steamed within water.

However, this clootie dumpling tastes and acts the same as a traditional clootie, and once cool it can be sliced thin and fried in vegan butter, which is traditional, if liked!

What is a Scottish Clootie Dumpling?

A clootie dumpling is a steamed fruit pudding that gets its name from the cloot that is used to steam the pudding within. The cloot is a cloth or muslin bag, but wee Scottish housewives of old would have also made use of a clean pillowcase or tea towel.

A clootie dumping is a traditional Scottish dessert that is often enjoyed during the Christmas and New Year festivities, and it is often part of a Robert Burns dinner. A clootie is similar to a fruit bread or fruit cake but not quite! Its also a little like a Christmas pudding but not as moist, dense or rich in flavour.

Although the clootie is not always enjoyed as a pudding, as many Scots do like a slice of fried clootie along with a savoury meal or as a snack, sliced and spread with butter.

This is not that unusual as fruit puddings were first eaten as an accompaniment to the main meal, such as the popular medieval pairing of having beef and plum pudding together on the same plate.

Scotland has a long history of puddings and dumplings which started as a savoury dish. The pudding or dumpling was prepared with a casing of animal stomachs in which the ingredients were stuffed into and then cooked over the fire.

The first puddings was a way for hunters to use up scraps of meat, especially offal, into a make-shift meal, that could be cooked outside over an open fire. These meals were the origins of the first Scottish haggis, which is also a type of pudding.

The puddings evolved into using a cloth bag to hold the fillings which was tied up with string before being cooked over a fire or within a pan of boiling water. More modern techniques use pudding basins and bowls to steam the pudding within the simmering water.

Most Scottish puddings and dumplings are traditionally prepared with beef suet which provides flavour as well as providing the pudding with a lighter texture.

There are so many recipes for clootie dumpling as each family who makes a clootie seems to have their own small variations.

Some clooties do not have any spices added and it can be quite plain tasting but this is preferred by many, while others like a nicely spiced clootie dumpling. Some recipes use golden syrup whilst others claim black treacle is a more traditional ingredient providing a richer flavour and darker colour.

This vegan clootie dumpling recipe does not contain eggs, butter, or dairy, and it uses vegan suet as opposed to beef suet. The vegan suet was the Suma vegan suet brand, but Atora also have a vegetable suet available.

If veggie suet is hard to come by or too expensive, then just use a vegan margarine, butter or shortening that is suitable for cooking or baking with. Stork baking spread is a good choice as its always worked for my family's baking.

Traditional clootie dumplings have a sort of skin that develops from the flour that is dusted over the cloth or cloot before the dumpling mixture is added. The skin also forms due to the plunging of the cooked cloot into cold water, before leaving the dumpling to dry out beside the open fire place that most old houses used to have.

As this vegan clootie dumpling is prepared in the microwave a skin does not form but after the clootie is cooked, it is sprinkled with caster sugar and popped into the oven on a low heat for 15 minutes which results in a crispy sweet skin-like outer crust forming. Although of course the oven stage can be omitted if preferred.

Why prepare vegan clootie dumpling in the microwave?

Best of all no excess cooking water is evaporated into the kitchen which can be a concern in that it can contribute to condensation on windows, and damp on the walls and ceiling, especially when homes can't be heated as normal due to rising costs.

Cooking a clootie dumpling in the microwave does result in a differently shaped dumpling which is not traditional, but the end result is a tasty treat that tastes just like a regular clootie dumpling.

Preparing a clootie dumpling in the microwave is the perfect way to save money, fuel and time, and the result is a great big tasty muckle lump of a pudding, that will keep your family in tasty puddings for a good few days! Depending on family size and serving sizes of course!

Oh and by the way, a Muckle lump is a Scots dialect phrase meaning a great amount or a generous portion!

First, add all the dry ingredients to a mixing bowl:

Next add the golden syrup [or black treacle/light molasses] and soya milk [or your usual milk].

Give all the ingredients a good mix and decant into a greased microwave-safe bowl. I used a 4 pint [2 litre/ just over 2 quarts] glass circular Pyrex casserole dish.

Cover with food wrap or an alternative and poke a few holes to allow steam to escape.

Cook in the microwave at the full setting until done. I used a 700 Watt microwave and the clootie was cooked after 23 minutes.

Once cooked leave for 5 minutes before removing from the bowl.

Place the clootie onto a baking tray, sprinkle with caster sugar, and bake on a low heat within the oven for 15 minutes.

This will dry out the crust creating a crispy sweet edge.

Clootie dumpling can be served hot with custard, cream, or ice cream. For an easy vegan custard recipe that uses custard powder, there is a method included within the recipe notes section [above the recipe] of our jam and coconut sponge recipe.

Once cool, the clootie will be more easily sliced into thinner pieces and is traditionally enjoyed spread with margarine or butter along with a nice cup of tea.

Or, once cool, fry each side of the clootie in vegan butter or margarine and have it as an accompaniment with a tasty vegan breakfast, brunch, or supper.

Clootie dumpling will keep somewhere cool and dry for up to a week, possibly a few days longer if the area is very cool and the clootie is kept wrapped in a layer of parchment paper and a second layer of kitchen foil.

Or freeze pieces of clootie for up to 4 months.

Using a 700 watt microwave it takes about 60 seconds for a small slice to reheat through to piping hot, but exact times will depend on your microwave and thickness of the clootie. So reheat for 60 seconds and check to see how hot the clootie is.

If you have any leftover custard then just add this in with the clootie and reheat both within the microwave. This is a sure-fire winter warmer! So tasty.

More tasty vegan bakes to enjoy over the festive season and beyond!

A slice of clootie dumpling spread with vegan margarine or butter is a delicious way to start the day! Or reheat until piping hot for supper with a good dollop of hot vegan custard, its the perfect way to end the day: tasty, cozy, and warm! 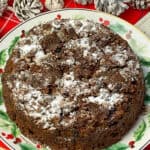 Print Recipe
This vegan clootie dumpling may not look like a traditional round clootie but it has all the tasty flavours of a traditional clootie, and it saves time, cooking fuel and money by cooking it in the microwave.
Course Afternoon tea, Breakfast, Brunch, Dessert, Supper
Cuisine Scottish
Prep Time 15 mins
Cook Time 23 mins
Drying in oven 15 mins
Total Time 53 mins
Servings 15 -18 slices
Calories 262
Author Jacq