This old-fashioned creamed spinach on toast recipe is a humble lunch or light dinner meal but packed with delicious wholesome, plant-based vegan flavours.

Fresh spinach cooked in a creamy white oat milk sauce delicately flavoured with dried onion and garlic, and finished off with a sprinkle of black pepper and nutmeg.

Serve scooped on top of golden toasted wholemeal bread for the best comforting and sustaining meal. Creamed spinach can also be enjoyed as a side dish or even chilled as a quick snack whenever you crave something creamy, savoury and packed with flavour.

Or why not blend the creamed spinach for the most amazing velvety, cream of spinach soup that is perfect for a special meal starter or an everyday lunch.

Creamed spinach in some shape or form has been a popular meal for thousands of years across the globe.

Spinach originated from Persia (Iran) before being introduced to India. Spinach then travelled to China during the 7th Century and Spain during the 11th Century. The rest of Europe including Britain was cultivating spinach by the middle ages. Early colonists brought spinach over to America. Today, China is the biggest supplier of spinach.

In Britain, vegetables have been cooked with spices, onions, garlic, milk, oil, salt, etc and served on top of toasted or grilled bread since at least the medieval times.

The first recorded English recipe book The Forme Of Cury (1390) has several such recipes including leeks on toast and fennel on toast. There is also a recipe for fried spinach. Serving cooked and flavoured spinach along with bread would have been quite common.

Creamed spinach was a particularly popular frugal meal during the American Great Depression and in Britain during the 1940s world war two years.

This recipe for creamed spinach is really quick and easy to prepare. Perfect for a simple lunch especially when you have a big bag of fresh spinach that needs using up.

Even better is sourcing a reduced yellow-sticker bag of spinach from the supermarket as then you can have an amazing budget-friendly dish that is packed with nutrition.

To serve the creamed spinach, I prepared a home-made wholemeal bread loaf using my bread machine but of course you can choose any type of bread for your creamed spinach dish. Sourdough, rye/pumpernickel bread, or crusty tiger bread would all be tasty choices.

Although creamed spinach can be used as a side-dish to accompany any meal or even enjoyed chilled from the refrigerator by scooping a tablespoon or two every now and again as a quick snack. Creamed spinach can be kind of addictive! It is difficult to stop at one bite after savouring the flavours.

If you or a family member is not too keen on spinach then perhaps this recipe will change your minds!

However, do feel free to sub out the spinach for a veggie of your choice. Such as kale, chard, cabbage, leeks, onions, sweet potatoes, white potatoes, fennel, asparagus, green beans, peas and sweetcorn, fresh/frozen broad beans, butterbeans, cannellini beans, etc. The list is endless!

Although for most of these veggies precooking before adding to the creamy white sauce at the end will be required as spinach only requires a few minutes to cook.

Another idea is to blend the creamed spinach along with extra plant milk and/or veggie stock and create a cream of spinach soup. So tasty and perfect for those family members who may dislike the texture of spinach.

If you prepare this recipe do pop back and let us know how you got on.

We love receiving all comments and feedback.

How To Prepare Old-Fashioned Creamed Spinach On Toast

How do I store leftover creamed spinach?

Leftover creamed spinach can be stored in the refrigerator within a covered food container or bowl.

Can I freeze leftover creamed spinach?

Leftover creamed spinach can be frozen but the texture and appearance may change slightly. It will still be delicious though!

What is the best way to reheat creamed spinach?

To reheat add the creamed spinach to a non-stick pan along with a few extra splashes of plant milk and bring to a simmer.

Stir and reheat over a gentle heat for a few minutes until piping hot.

Can I prepare creamed spinach on toast as gluten-free?

Simply use a gluten-free plain flour mix and ensure that any herb/spice powders that you use are also free from gluten ingredients.

Also check your vegan margarine and plant milk doesn't have any sneaky gluten ingredients which it probably won't, but it is always best to check especially oat milk.

Lastly, if serving over toasted bread use a gluten-free bread product.

Can I substitute fresh spinach for something else?

Although do bear in mind that spinach cooks in minutes unlike many other veggie ingredients. Therefore other veggies may need precooking before adding to the sauce for the last few minutes of cooking.

Leftover cooked veggies are perfect for this recipe.

Do I have to serve creamed spinach with toasted bread?

It is traditionally served with toast but is just as popular as a side-dish along with any meal.

Try adding a spoonful or two of creamed spinach to a rice or pasta dish such as macaroni cheese or cheesy pasta for extra nutrition and creaminess.

A scoop of creamed spinach along with this vegan rice-a-roni is particularly tasty.

Or stir through hot creamed spinach into plain rice.

Any dish with mashed potatoes or mashed root veggies is also delicious with a scoop of creamed spinach. Also try creamed spinach as a baked potato filling.

Could I prepare cream of spinach soup with this recipe for creamed spinach?

Simple add veggie stock and/or extra plant milk enough to blend the creamed spinach into a soup with your desired thickness.

Serve with a swirl of plant cream and a dusting of nutmeg. A few toasted sunflower or pumpkin seeds would be a delicious addition. 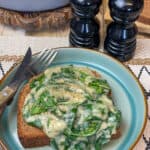