Vegan traditional Irish leek and oatmeal broth is a humble soup simply prepared with a few classic ingredients but is full or flavour and plant-powered nutrition.

This recipe is perfect for tasty, quick and easy family lunches, as part of a light dinner, or as a starter.

A mug of this broth is also ideal for anyone who is feeling under-the-weather and in need of nourishing meal that is comforting yet gentle on the stomach.

Having a St Patrick's Day or Irish themed meal or celebration? Irish leek and oatmeal broth is a delicious classic addition.

Brotchan is an Irish word and translates to broth while Roi means king or chief, so the Irish name for this broth is actually King or Chief Soup.

Leek and oatmeal broth dates back to at least 6th century Ireland where Irish folk made soups and broths from the fruits of their crops. The three most popular foods from that time was leeks, oats and milk.

Leek and oatmeal broth would have provided the poorer folks with lots of nutrition and filled hungry bellies with the affordable trinity of leeks, oats and milk, so calling it king soup is very apt.

Leek and oatmeal broth has also been referred to as a druid soup as this dish was popular with the Irish druids that are part of Irelands Celtic culture.

Druids were educated, religious men who were also known for their in-depth knowledge of the natural world and their connection with the spiritual almost magical realm. Druids were also considered to be judges, doctors/healers, prophets, keepers of history, and poets.

Irish culture and history is so full of mystery and appeal. My family lived in Northern Ireland for many years, indeed two of my kids were born there, and I love staying in contact with my families history through appreciating Irish food and developing plant-based recipes. As well as learning the history and tradition behind each dish.

I was motivated to keep this vegan recipe as humble and near to the traditional broth as possible.

Leeks and oatmeal remain the star of the show, enriched with a little plant milk and vegan stock, and lightly seasoned with salt, pepper and chopped parsley. A little swirl of plant cream is optional but delicious.

I use a vegan chicken flavoured stock powder but any vegan stock you have to hand is perfectly fine. There is a link in the ingredient list if you'd like to check out what stock I use.

I usually blend the broth with a hand blender as it creates a beautiful light emerald green colour. But if preferred the soup can be enjoyed as is, especially if you like more texture to your broths.

How To Prepare Irish Leek And Oatmeal Broth

How do I store leftover leek and oatmeal broth?

Leftovers can be stored in the fridge within a covered container for 3 days. Or frozen for up to 4 months. Defrost before reheating.

What's the best way to reheat leek and oatmeal broth?

Reheat in a saucepan by bringing to the boil over a low heat, lower the heat and gently simmer for 1-2 minutes until piping hot.

What can I serve with leek and oatmeal broth?


* If your feeling under-the-weather simply serve a cup of this broth alone as it is comforting, satisfying, nourishing and gentle on the stomach

* A wedge of Irish soda bread is the perfect accompaniment

* Any vegan crusty bread or rolls

What is the best plant milk to use to prepare this broth?

Any plant milk that is fine for cooking and has proven not to curdle in hot tea or coffee, should be fine for this broth.

I find the Oatley organic milk varieties are good for cooking as is Alpro soya milk.

However, it is important not to bring this broth to a rolling boil, but to gently simmer over a low heat.

If preferred omit the plant milk and simply prepare with vegan stock, perhaps add a drizzle of plant-milk or cream at the end of cooking.

Is plant milk a traditional ingredient?

It may surprise many people but plant milk, most notably almond milk, is actually a traditional ingredient that originates at least back to 12th century medieval Britain and Europe.

Christianity did not allow people to use dairy milk during medieval holy days and so almond milk was used instead.

There is even reference to almond based butter and fake eggs made with almond milk and saffron. Also dairy milk could not be kept cold due to a lack of fridges so almond milk was a safer drink to consume during the medieval era.

What's the difference between a soup and a broth?

A broth is more of a liquid with little pieces of veggies and/or protein in the form of meat or substitutes, grains, etc added and simmered. Oatmeal and leek broth is prepared by creating an oatmeal-milk-stock broth and simmering, before adding the leeks. The oatmeal-milk broth could technically be enjoyed as it is without adding veggies, the broth can stand alone.

Whereas a soup is more chunkier and heartier, generally with more ingredients and flavoured with a stock. However, milk can also be added to a soup, so it can be confusing!

Can I prepare leek and oatmeal broth as gluten-free?

However, although oatmeal is naturally gluten-free it is common for oats to be processed in a factory alongside gluten ingredients and so can be contaminated with gluten.

So it is important to purchase oatmeal that is certified gluten-free as even though the contamination may be small, some individuals still react badly.

If you can not source gluten-free pinhead/steel-cut oatmeal then sub this out for gluten-free rolled/quick cook oats.

Do I need to use pinhead/steel-cut oatmeal for this recipe or can I use rolled oats?

Pinhead oatmeal are also known as steel-cut oats or Irish oatmeal. Rolled oats are the quick cook variety that is usually sold as porridge oats. Both varieties originate from oats but are simply processed differently.

Pinhead oatmeal has undergone less processing with the whole oat groats being sliced into little pieces. As some of the groat kernel remain this kind of oats take slightly longer to cook, has more texture and a nuttier flavour. Quick cook oats have also been sliced but are further rolled into flat flakes that as a result are quick to cook.

Sixth century Irish folks who prepared this broth would have processed the oats by hand to create the pinhead oatmeal so if to keep this recipe traditional use pinhead oatmeal if possible. But if rolled oats are more easily sourced, and this variety can be less expensive, then don't sweat it just use them! I would.

More vegan recipes that will help use up a bag of pinhead/steel-cut oatmeal: 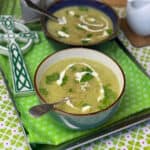