Traditional date and syrup steamed pudding prepared in the slow cooker or crock-pot is so deliciously simple, easy, and uses all vegan plant-based every-day pantry staples.

Preparing classic steamed puddings in the slow cooker or crock pot equals less fuss and is more budget-friendly compared with steaming for hours on the stove-top!

Steamed puddings are a traditional British dessert that is either steamed in a cloth bag (clootie) directly within simmering water or the uncooked pudding placed within a covered pudding basin/dish which is then placed in a pot of simmering water.

These types of pudding appear to have evolved from a type of Roman sausage that was brought over to Britain during the 1st Century.

The first puddings were technically not intended as a dessert but rather a savoury dish served along with the meal. But even more confusing is that the savoury meat pudding contained sugar and dried fruit along with spices such as mixed spice, nutmeg, mace, or cinnamon!

Modern Christmas pudding that is popular in the UK stemmed from these medieval meaty, sweet, spicy puddings that were also known as figgy or plum puddings.

There are now vegan plant-based versions of haggis and black pudding available which are very tasty and nice as an occasional treat especially for a Robert Burns Night Supper.

During Wartime Era Britain (1939-1945) and a few years after, as rationing and shortages went on after the war ended, steamed puddings were a popular savoury and dessert meal.

For a vegan plant-based adapted wartime era steamed Christmas pudding try this easy one we have on the blog. It is so tasty and much lighter than traditional Christmas puddings and features grated potato and carrot! A bonus is that it can be prepared in the microwave and ready in just 15 minutes.

Steamed puddings were common during the British second world two era as they were so versatile and could be filled with inexpensive ingredients and adapted to what was available.

Many savoury steamed puddings were lined with a suet pastry crust with some dessert puddings featuring a bread lining or prepared with breadcrumbs, fruits, custard, etc.

This steamed date and syrup pudding is similar to another popular British pudding sticky toffee pudding, which is not usually steamed rather is baked and served warm with a hot sticky toffee sauce poured over the date cake.

However, for sticky toffee pudding the chopped dates are stewed before bicarbonate of soda is mixed through, which results in a kind of date puree which is mixed through the sponge batter.

For this date and syrup pudding the dates are simply chopped and stirred through the cake batter, with Lyles golden syrup added to the bottom of the pudding basin.

This method results in delicious pieces of soft dates mixed with thick sweet golden syrup that looks incredibly pretty when the cooked pudding is demoulded out of the pudding basin.

If your in the UK, the large inexpensive packets of dried dates from Home Bargains are ideal for this pudding, as they are what I used!

Cinnamon is also added to this date pudding recipe, but this can be replaced with ginger, mixed spice, pumpkin or apple pie spice if preferred.

Steamed puddings are just so budget-friendly as only every-day simple ingredients are required but at the same time these tasty treats retain an indulgent and comforting vibe.

Also preparing classic steamed puddings in the slow cooker or crock-pot saves time and money compared with a few hours of steaming on the stove-top cooker.

If you use a pudding basin with a clip-on-top the process is even simpler as no home-made lid needs to be prepared.

A slice with hot custard is the perfect winter evening warmer especially when your all cosy on the sofa watching your favourite soap or TV show!

If you prepare this steamed date pudding recipe do pop back and let us know how you got on.

We love reading all comments and feedback.

How To Prepare Slow Cooker Steamed Date And Syrup Pudding:

How do I store leftover steamed date and syrup pudding?

Leftover steamed pudding can be stored in the fridge, within a covered container, for up to 4-5 days.

Whole puddings can be cooled within the pudding basin/dish and then stored with a lid on or with the greaseproof/kitchen foil cover intact.

Can I freeze date and syrup pudding?

Freeze within a food container for up to 3 months.

Defrost fully before enjoying at room temperature or reheating.

How do I reheat date and syrup pudding?

Or place the pudding in an oven proof dish and cover the top and reheat in a hot oven for 10-15 minutes or until the pudding is nice and hot.

For faster reheating a microwave can be used and will take only a few minutes to reheat to piping hot. (Although do change the pudding dish to a microwave safe one if necessary and remove any kitchen foil that may have been used as part of the pudding lid)

What can I serve with steamed pudding?

Can I prepare steamed pudding as gluten-free?

Also sift a ¼-1/2 teaspoon of xanthum gum through the flour. This ingredient helps to stick the pudding crumbs together.

Also use a gluten-free baking flour.

If the cake batter looks too dry once prepared add an extra tablespoon of plant milk to the mixture as gluten-free flour tends to be quite thirsty compared to regular flour!

Can I prepare steamed date and syrup pudding on the stove top?

Prepare this pudding and simply pop it into a large pot to steam for about 2 and a half hours.

A small heatproof plate can be placed at the bottom of the pan and the pudding basin popped on top if preferred.

This can help protect the base of the pudding from too much heat but I don't tend to do this as it can rattle nosily as the water simmers.

Pour boiling water half way up the pudding basin and don't let the water run dry whilst steaming.

How do I prepare a steamed pudding lid?

The easiest method for steaming a pudding with less fuss and more convenience is to use a pudding basin that comes with an attached heat-proof lid. It is so much easier!

There is an Amazon affiliate link within the recipe card to the exact pudding basin that this recipe uses.

However, if you already have a pudding bowl that you would like to use then you can prepare a traditional lid with greaseproof paper, kitchen foil and string.

Watch this YouTube video clip below from Mason and Cash on how to fashion a pudding lid as it explains it much easier than I could write! 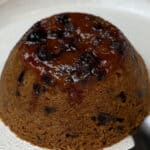