Vegan British semolina pudding is a hot, creamy, sweet, satisfying, comforting dessert that the whole family will love. Perfect for warming everyone up during the chilly, rainy, windy months.

Although semolina pudding can be enjoyed chilled for a refreshing, smile-inducing dessert, supper or breakfast.

What Is Vegan British Semolina Pudding?

Semolina pudding is similar to rice pudding in preparation and ingredients.

It is such an easy, simple dish with just a few ingredients: plant milk, semolina and a sweetener. Vegan butter or margarine is an optional addition.

Mix everything together and in less than 30 minutes a delicious bowl of creamy comfort can be achieved that is especially nice enjoyed on a chilly, windy or rainy evening snuggled up on the sofa under a blanket and watching your favourite soap on TV!

Semolina pudding can be enjoyed hot or cold, as a dessert, pudding, breakfast or even as a light lunch. This pudding can be prepared with either water or milk, but milk does produce a much nicer flavour, texture and appearance.

The type of semolina used for puddings is different from the semolina flour that is prepared from durum wheat and commonly used to prepare pasta and bread.

Semolina flour can be purchased alongside other flours and it can be confusing, as I once purchased a bag of flour semolina and tried to cook it as a pudding! It tasted kind of OK but the texture was a little off!

The semolina meant for pudding is also a wheat product and is produced during the milling of wheat. In the UK it can be found near or in the home baking aisle alongside packages of rice pudding and custard powder.

In the US the closest thing to the British semolina is labelled cream of wheat.

Semolina pudding was a popular old school British pudding during the 70s and 80s. This milky pudding still remains a firm, nostalgic favourite and is available for purchase in powdered form, usually near the home baking section, in most UK supermarkets and local grocery stores.

However, semolina pudding dates further back to at least the Roman times where a 4th century AD text Apicius describes a pudding prepared with farina wheat, almonds and raisins.

Many countries around the world also have a version of semolina pudding with various different flavours and ingredients. For example the Czech Republic enjoy adding cocoa powder or chocolate to semolina pudding whereas in Hungry granola or seeds may be added.

How do I store leftover semolina pudding?

Semolina pudding is best eaten hot soon after it has been prepared but it can be enjoyed chilled or reheated.

Store in the fridge for up to 3 days.

Can I reheat leftover semolina?

Yes but extra plant milk may be needed to thin down the pudding a little as semolina tends to become really thick as it cools.

Add the semolina pudding to a non-stick pan and gently bring to a simmer, stirring frequently, reheat for a few minutes until piping hot.

Unfortunately as semolina is a wheat product it is not suitable for those requiring a gluten-free diet.

However, a delicious alternative is rice pudding and we have a vegan rice pudding recipe here on our family blog that we enjoy several times a month.

Although rice flour is commonly available in health or wholefood stores and could possibly be used as a replacement for semolina in this recipe. This may suit those looking for a smoother rice pudding as opposed to using pudding rice/short-grain rice.

In the US cream of rice is similar to rice flour and can be made into a delicious smooth pudding similar to cream of wheat and semolina pudding.

Can I add anything to semolina or serve it with something extra?

Yes, anything that you would add to dishes such as rice pudding or oat porridge/oatmeal can also be added to semolina pudding.

* add a handful of raisins/sultanas during simmering.

* dusting of cinnamon or nutmeg

What can I use as a sweetener for semolina pudding?

I tend to use ordinary sugar for my family's semolina pudding but if your usual or preferred sweetener is different then you can easily incorporate this.

The actual amount of sweetener added to semolina pudding is personal preference.

Some prefer a sweeter version whereas others prefer a less sweeter pudding.

Play around with the sweetness levels to discover your family's ideal amount.

Is semolina pudding just for dessert?

Semolina pudding can be enjoyed chilled for breakfast, snack or even supper.

Slow cooker vegan rice pudding (one of the best British desserts ever!) 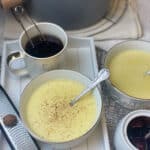