Old fashioned sweet barley pudding is a delicious British classic hot pudding that is really easy to prepare in the slow cooker or crock-pot.

If you love rice pudding then do give this recipe a try as it is incredibly budget-friendly, wholesome, and hearty enough to satisfy those extra hungry family members!

Enjoy a bowl of sweet barley pudding with canned retro fruit or a scoop of fruit jam (jelly). Or prepare for breakfast as a tasty barley porridge.

Barley is an ancient grain that has been cultivated in Egypt, Asia and Europe for thousands of years.

By the British Medieval times, frumenty was a popular meal which consisted of barley grains cooked in milk or a savoury broth/soup until the dish became a really thick porridge consistency or potage.

(Incidentally we do have a vegan medieval potage recipe on the blog. So do give that a try for a budget-friendly historical meal!)

If available other ingredients were added to the frumenty such as dried fruits, spices, herbs, eggs or nuts. Although those ingredients would most likely only be available to the richer members of society.

Frumenty was also a popular meal during the Medieval Lent.

Lent (2nd March - 14th April 2022) is the 40 days preceding Easter, where many Christian followers go through periods of fasting meat on special days such as Ash Wednesday, and all the Fridays during the Lent period including Good Friday.

Sweet barley pudding or barley porridge is simply an adaptation of the medieval frumenty and has been enjoyed in Britain for hundreds of years.

There is a recipe that dates back to a 1764 English cookery book 'English Housewifry' by Elizabeth Moxon termed Pearl Barley Pudding.

This pudding has the pearl barley boiled until soft before adding eggs, cream, sugar, salt, rose-water, butter and nutmeg. This barley mixture was then baked with a puff pastry topping!

Although barley pudding and porridge has dropped from fashion in modern times, it is time for this delicious budget-friendly pudding or breakfast to have a much deserved come-back!

It couldn't be any simpler to prepare vegan barley pudding in the slow cooker. All you do is add the ingredients to the pot, set the cooker to high, and leave for 3 and a half hours. The pudding may require an addition 15-30 minutes depending on your slow cooker or crock-pot, but certainly no longer than 4 hours.

Once cooked the barley will be soft but still a little chewy. If the pudding does not seem thick enough the slow cooker lid can be removed, the heat turned off, and the pudding left for 15 minutes to thicken up.

A sprinkle of cinnamon powder is the perfect addition, but nutmeg, mixed spice powder, apple or pumpkin spice powder would all be tasty.

Finally the barley pudding can be served hot with fruit jam (jelly) and/or a few tablespoons of canned fruit such as the retro classic fruit cocktail. Fresh fruit and berries are also delicious added to the finished barley pudding.

To create a barley porridge similar to oat porridge simply reduce the amount of sugar and add any flavourings that you would normally add to your oatmeal.

If you'd like to prepare the sweet barley pudding using the stove-top then do check out the recipe notes for an easy method.

If you prepare this barley recipe do pop back and let us know how you got on.

We love receiving comments and feedback.

How To Prepare Sweet Barley Pudding In The Slow Cooker

How do I store leftover sweet barley pudding?

Leftover barley pudding will keep fresh in the refrigerator for up to 3 days. Store within a covered food container.

Can I reheat barley pudding?

Although the pudding will become very thick as it sits so a little plant milk may need to be mixed through before reheating.

Reheat on the stovetop within a small non-stick pot until piping hot, stir frequently.

Or place back in the slow cooker and reheat on the high heat setting until the pudding is piping hot.

Alternatively reheat in a microwave.

Similar to rice pudding, barley pudding can be enjoyed chilled straight from the refrigerator.

Anything that you would normally add to oat porridge or oatmeal is perfect for barley pudding. In fact barley pudding can also be named barley porridge!

Also a small dish of chilled barley pudding is a perfect snack or evening time supper.

Can I prepare sweet barley pudding on the stove-top?

If preferred this sweet barley pudding can be prepared on the stove top using a non-stick pot.

Just add all the ingredients to the pot and gently simmer until the barley is soft and the pudding thick and creamy.

Keep an eye of the pudding and stir frequently.

Add extra plant milk as required during cooking if the pudding becomes too thick.

Sweet barley cooking will take around 45-60 minutes to cook on the stove-top.

Which plant milk is best for sweet barley pudding?

Your usual plant milk should be fine for barley pudding.

However, plant milks such as soya or oat do seem to be more creamy so are best for desserts but really this is just personal preference.

I prefer to use soya milk, but I have used oat, coconut and almond milk for rice pudding and had good results.

Can I replace the sugar with an alternative?

Replace the sugar with your preferred alternative.

Unfortunately as barley contains gluten this pudding is not suitable for gluten-free diets.

For a similar pudding do try rice pudding as this is great for gluten-free diets.

A link for our slow cooker rice pudding is just below this question. 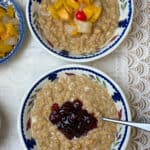 To grease the slow cooker: