Vegan chocolate custard pudding is a traditional chocolate pudding that has been enjoyed for many generations.

This chocolate custard pudding is such a quick and easy dessert that can be ready in just 20 minutes. Or chilled for later.

Even if you are not a fan of custard this chocolate pudding is a different thing altogether.

Each bite tastes like a chilled chocolate pudding that you might find in the supermarket chilled section beside the yogurts.

If you enjoy Alpro soya chocolate pots you will love this recipe.

Bird's custard powder was invented in 1837 by the chemist Alfred Bird. Custard powder is made with cornflour and was created by Bird as his wife suffered with an egg allergy.

When Bird released that others enjoyed the custard prepared with the powder he began to manufacture and produce the custard powder for general sale.

Bird's custard powder became so popular that it was widely used during the First World War (1914-1918) and the British army were even supplied with custard powder.

There are two types of chocolate pudding. One is baked or steamed and is of much older origin. The second pudding can be prepared with either an egg custard or a starch-based mix before heated in a saucepan to thicken up and then chilled.

Chilled chocolate pudding dates back to the 19th century and was eaten mainly be richer folks.

National Chocolate Pudding Day is held each year on the 26th June.

This is the perfect day to appreciate and enjoy a home-made chocolate pudding.

Although any day is chocolate pudding day in my house!

How do I store leftover chocolate custard pudding?

Leftover chocolate custard pudding can be stored in the fridge for 3-4 days. If storing fro more than a day cover the dishes of pudding to prevent other strong flavoured food from affecting the pudding.

What can I serve with chocolate custard pudding?

Serve the pudding on its own or with a drizzle of vegan cream or dollop of vegan whipped cream or yogurt.

A scoop of vegan ice-cream is my kids favourite accompaniment to chocolate pudding.

Serve with fresh or frozen berries. Or a home made berry coulis/sauce.

Slices of ripe banana or mango are an especially tasty accompaniment.

Shreds of dried coconut or a sprinkle of desiccated coconut.

Can I use this custard pudding recipe to prepare chocolate custard for pouring over cake or traybakes?

Prepare the custard as per the instructions below in the recipe card.

Chocolate custard is especially tasty with a square of traditional jam and coconut sponge, which is an old school dinners British favourite. 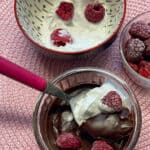