Vegan slow cooker rice pudding is so easy and simple to prepare. It is a sure-fire family favourite dessert. This recipe is based on the rice pudding my mum prepared when I was growing up in Scotland.

A bowl of creamy, milky, sweet and thick rice pudding is just the perfect comfort food that revives and soothes the soul.

Cooking the rice pudding in a slow cooker is the perfect simple method as gone is the fear of the milky pudding sticking to your saucepan or frequent stirring at the stove-top.

However stove-top and oven-baked rice pudding methods are included below in the FAQ sections.

Slow cooker rice pudding is the perfect mid-week supper or dessert and is perfect for hungry kids and busy families.

Just chuck in three key ingredients, rice, sugar and plant-milk, and leave it to do its magic for a few hours. Its that simple. And versatile. As rice pudding can be flavoured with lots of yummy additions, as detailed below.

Rice pudding has been enjoyed in Britain since at least the Tudor era. The first recipe for rice pudding was written by an English writer in 1615 Gervase Markham and was titled whitepot. This early recipe is very similar to modern rice pudding recipes.

Many countries around the world have variations of traditional sweet rice pudding. Sweet rice and milk is obviously a successful culinary combination and will never be outdated. A vegan, plant-based option is the perfect evolution and results in a much kinder dessert to enjoy.

What kind of rice do I need for rice pudding?

Traditionally in the UK, a type of rice called pudding rice is used to prepare rice pudding.

Pudding rice is a short-grain rice that is extra starchy and chalky, and works amazingly when cooked in milk as it all binds together. Resulting in a pudding that is extra creamy.

However any short-grain rice can be substituted.

Other rice varieties that are a good replacement are Thai jasmine, basmati, Arborio, and risotto. Although cooking times may need to be adjusted.

What can I serve with rice pudding?

Can I add anything extra to rice pudding?

Yes of course! There are many traditional additions that can change up the flavours and textures of rice pudding. A few ideas that can be added at the beginning of cooking:

What can I do with leftover rice pudding?

Leftovers can be place in the fridge in a covered container for up to 3 days.

These little tasty pots are perfect for packing in lunch boxes, enjoying on picnics or for a tasty snack or supper. Add a little dollop of jam (jelly) to the side and you have a copycat of Mueller rice corners.

How can I reheat rice pudding?

Rice pudding can be reheated by placing back in the slow cooker, turning heat to high and leaving for 20-30 minutes or until piping hot. Or placing in a non-stick pan and gently reheating. A little extra plant-milk may be required to prevent pudding from sticking, if the pudding is very thick.

Can I prepare this rice pudding on the stove-top?

Absolutely. However I was needing a method that was quick and easy and avoiding the need to hang around the stove and stir the pudding frequently to avoid sticking and burning the milk, which is why this slow cooker recipe was developed. But if you have a great non-stick pan rice pudding can be prepared on the stove top. Simply add the ingredients to your saucepan, bring to the boil, lower the heat and simmer gently until the rice is soft. Stir frequently. If the pudding is too thin just take off the heat and place a lid on your pan. Leave to sit for 20-30 minutes and the pudding will thicken up.

Can I prepare this rice pudding in my oven?

Rice pudding is traditionally prepared in the oven and many people love the skin that occurs on the top of the pudding as a result. To prepare in the oven, grease a casserole dish and add the ingredients. Bake at 140 Fan/ 160 Celsius/ 325 Fahrenheit /Gas 3. Place a lid on the pudding and leave for about 2 hours. Remove the lid and check to see if your pudding is thick and creamy. If not place back in the oven with the lid off for another 15-20 minutes. If you don't like the skin that forms simply remove. My daughter actually shudders at the thought or sight of rice pudding skin! Whilst other family members love it!

Do you have a method for almost instant or quick rice pudding?

If you have leftover ready-cooked plain rice it can be prepared into a delicious rice pudding. Simply add the rice to a pan, add enough sugar to taste and pour in enough plant-milk to achieve creamy, thick consistency. Mix everything well and bring to the boil. Lower the heat, stir frequently, until the rice pudding is piping hot throughout.

To make an extra creamy rice pudding add a can of vegan condensed milk and top it up with plant-milk if necessary. And proceed with reheating over a low heat.

Any ready cooked rice can be used for this method including wholegrain or brown varieties although the finished texture will not be exact same as using a shorter grain rice, but the finished pudding will be delicious. And is a perfect way to use up leftover rice.

What kind of plant-milk makes the best rice pudding?

Any plant-milk is suitable. I love using oat milk as it creates a creamy, pale rice pudding.

I also like using soya milk as it copes well with cooking and tastes good but does slightly colour the rice pudding which doesn't bother me in the slightest. Almond milk is also a good choice for rice pudding.

Coconut milk (not the one in the tin but of course that could be used also) leaves a subtle coconutty taste which may be desired by some.

In all, use any plant-milk you have available and experiment. They are all good!

If you love rice pudding you may also enjoy: 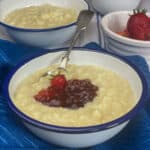 To grease the slow-cooker: