What is a cobbler?

Cobblers in some shape or form are popular around the world but especially so in Britain, the US, Canada, and Australia.

A traditional cobbler can be prepared with either a sweet or savoury filling such as stewed fruit or savoury mince. The cobbler part refers to the bumpy looking cobbled topping that is usually prepared with a scone or dumpling mixture.

Many British cities, such as Edinburgh, still have some of the traditional cobbled streets that were built during the 1800s, and it is these bumpy cobblestone roads that the culinary cobbler is named after.

It is claimed that cobblers originated in the early American colonies when British colonialists prepared meat stews and topped them with scones or flour dumplings.

Before the British settlers arrived in the colonies, they would have added the animal fat 'suet' to dumplings, puddings, and pastry dishes, but once in the colonies suet was not so readily available.

American biscuits evolved from the British scones, and so biscuits would have eventually been used as a cobbler topping.

This cobbler topping is comparable to the lightest, fluffiest, and soft pillow-like dumplings. So tasty and amazingly can be easily baked in the slow cooker.

This savoury veggie mince cobbler is easy to prepare. First the vegan mince is cooked within a rich sauce before being topped with mini cheese scone cobblers.

The cobbles only take about an extra 45-60 minutes to steam cook and the result is just the best, fluffy, cheesy cobbler dumplings.

Pour in the hot vegetable stock.

Switch the slow cooker to the high setting and cook for 3 ½ hours.

Stir through the red wine vinegar and frozen peas.

Next prepare the cobbler topping.

Add the plain flour, baking powder, and margarine into a mixing bowl and using your finger-tips rub the mixture together into a breadcrumb like consistency.

Tip in the salt, mustard powder, and vegan cheese.

Stir and add enough milk to bring the mixture together into a ball.

With a rolling pin gently roll out the dough to about a half inch thick.

Stamp out rounds with a biscuit cutter.

Place the cobbles over the savoury mince, its fine if some overlap.

Sprinkle with a little vegan cheese.

Place a tea towel under the slow cooker lid and securely press the lid down.

Leave to cook for about 60 minutes.

Leftover cobbler can be stored within the refrigerator for 3 days. Or frozen for up to 3 months.

Reheat by placing into an oven safe dish and heat until piping hot within the oven at about 160Fan /180C / 356 Fahrenheit / Gas 4. If preferred cover the cobbler with some kitchen foil.

Or place the cobbler back into the slow cooker and switch to the high setting and leave until piping hot. Or microwave for a few minutes.

Can I leave the cheese out of the cobbler?

Of course. If preferred omit the vegan grated cheese and perhaps replace with a 2-3 tablespoons of nutritional yeast flakes for a cheesy hit.

What kind of veggie mince is best for cobblers?

Alternatively, use dried vegan mince such as textured vegetable protein or dried soya mince, and rehydrate it according to the package instructions. Use about 300 grams [weight is after rehydration] of the mince for the cobbler recipe. Dried vegan mince usually only has one or a few ingredients and is the most cost effective compared with fresh and frozen veggie mince.

Although, fresh or frozen vegan mince does tend to have more flavour and texture, compared to dried vegan mince which usually needs more flavour added. However, this can be a bonus as the dried mince soaks up all the tasty flavours that is added to it.

Where can I find vegan Worcester or Worcestershire sauce?

As ordinary Worcester or Worcestershire sauce contains anchovies it is not suitable for a vegan or plant-based diet.

Many supermarkets, grocery stores, health food or wholefood stores carry vegan Worcester sauce. A little bit of Worcester sauce goes a long way as it contributes a good doze of deep and rich savoury flavours, so it can be worth the initial outlay as one bottle can last for months in the refrigerator and can be used in many meals.

Holland and Barrett carry Bonsan Vegan Worcester Sauce Organic which at the time of writing is £3.79 for 140g.

Alternatively, if you can't find a vegan Worcester sauce or just don't want to use it then simply replace it with soy sauce.

Can I prepare veggie mince cobbler in the oven?

Absolutely. The savoury mince filling can be prepared on the stove-top, although extra liquid will likely need to be added. When the mince has cooked transfer to an oven-safe dish and top with the cobblers.

Bake at 200 Fan/ 220 C/ 425 F/ Gas 7 for 15 minutes [on the middle shelf] or until the cobbler topping has risen and is lightly golden brown. Exact times will depend on your oven. As the cobblers will be baked they can be brushed with a little plant milk before sprinkling the cheese over.

Alternatively, use smaller individual pie dishes or ramekins for the cobbler which would make a delicious meal for Thanksgiving, the festive season or a special Holiday. Depending on your baking dish sizes, divide the mix between 4-8 dishes.

Why should I use a tea towel cover for the slow cooker?

The tea towel is simply to soak up the excess moisture that develops as the cobbles cook in the slow cooker. The tea towel is not necessary for cooking the savoury mince but helps with slow cooker bakes such as bread, cakes, scones, and similar.

Without the tea towel the moisture would steam up onto the lid and then drip back down onto the scone cobbles, which could result in soggy cobbles.

Instead of a tea towel, a muslin cloth designed for cooking can be used. Or a specially designed slow cooker cloth lid can be purchased [have a look on eBay for instance].

The slow cooker lid is always placed firmly over the tea towel so don't just use the tea towel or muslin cloth for a lid as the food may not cook properly and the tea towel could sink into the food!

As it is not recommended or advised in slow cooker instruction books to use a tea towel under the lid, to be on the safer side its best to check the slow cooker frequently just to make sure everything is going fine.

These fluffy, light, and cheesy cobbles are similar to tasty dumplings or steamed scones and are just irresistibly delicious, especially when enjoyed with the rich savoury veggie mince.

There is 7 meals below so one for each day!

During the cost of living crisis the slow cooker is one of the most energy efficient methods of cooking.

Its so worth investing in a slow cooker or crock pot if you don't currently own one, and second hand ones are just as great.

And for a slow cooker pudding try one of these tasty traditional family favourites: 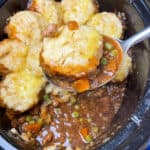 Stir through before adding cobbler topping:

We would love to know how you got on.

It would be wonderful if you could leave us a comment below and click the star ratings.