Vegan empire biscuits or cookies have been a popular British teatime treat for over 100 years.

Celebrate the US fourth of July? A fun idea is to decorate these vegan empire biscuits with water icing that is the colours of the US flag. The result is a unique, delicious addition to the party celebrations.

Shortbread biscuits evolved from a Scottish medieval bread that was baked more than once to create a biscuit like texture. Sugar was dusted onto the crunchy bread.

Mary Queen of Scots (1542-1587) was claimed to enjoy shortbread with caraway seeds.

The first shortbread recipe was found in a Scottish recipe book dates 1736.

Empire biscuits are basically shortbread biscuits sandwiched with jam, topped with water icing, and finished off with a halved cherry or jelly sweet.

It used to be traditional in the Scottish Island of Shetland to crack a decorated shortbread round over the head of a new bride just before she entered her home with her husband!

We have a tasty vegan shortbread recipe so be sure and check that out also.

Empire biscuits are a biscuit with many names.

In Scotland, nowadays these yummy treats are often called Belgium biscuits.Though I am from Scotland I've really only known these biscuits as empire biscuits.

In England, they are generally named empire biscuits.

Although, before those two names empire biscuits were originally termed either Linzer, Deutsch or German biscuits.

But when World War 1 (1914-1918) began the British people were uncomfortable with having a biscuit that highlighted Germany seeing as they were the enemy.

Therefore, the name was changed to empire biscuit.

However, in Scotland when Belgium was invaded by the Germans they somehow decided the name Belgium biscuits was more fitting.

But in Northern Ireland they are still known as German biscuits.

That's a tad too many names!

Traditional Scottish Smiddy Dumpling (cousin of the famous Scottish clootie dumpling but easier to prepare as its baked and not steamed! Delicious with a nice cup of tea) 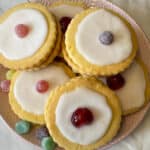 For the shortbread biscuits: