A traditional Scottish smiddy dumpling is essentially a baked rather than a steamed or boiled dumpling and is similar to a Scottish sultana cake.

This recipe was adapted from The Scottish Maw Broon's cookbook. Growing up in Scotland the Broon's was a favourite comic strip and now as an adult I love the cookbooks.

Or just enjoy this tasty vegan bake whenever you fancy!

There is not much information readily available regarding the Scottish traditional smiddy dumpling.

Even Maw Broon's cookbook which contains the original recipe, which my vegan recipe was adapted from, does not actually state any useful information about the cakes origin. The book does state that the smiddy dumpling is easier to prepare compared to other dumplings! Which I assume they are referring to the slightly more complicated Scottish clootie dumpling which is wrapped in a cloth and boiled for a few hours.

Smiddy is another name for smithy which refers to someone who works as a blacksmith. A blacksmith crafts items out of metal using fire and a hammer so perhaps the smiddy dumpling has connections with Scottish blacksmiths! Possibly a slice of smiddy dumpling was a tasty snack for the hard working Scottish smithy's.

Whatever the smiddy dumpling origins are, the fact remains that Scotland historically loves its puddings and dumplings!

Preparing this vegan Scottish smiddy dumpling is easy and simple. It does take a little longer to bake than ordinary fruit cakes but the result is worth it and this dumpling can be treated as more of a pudding than a cake.

A traditional smiddy dumpling would have the dried fruit boiled with the water, margarine and sugar for a few minutes before mixing through the rest of the ingredients. Eggs are also added.

However, I wanted to make this dumpling as simple as possible mainly to save time, so for this recipe the ingredients are simply combined before scooping into the loaf pan. The resultant vegan fruit dumpling cake retains the deliciously moist fruit.

A slice of vegan smiddy dumpling is so tasty served with a slather of vegan butter or margarine, or dollops of fruit jam/jelly/preserve.

But even better is warm or room temperature smiddy dumpling served with hot vegan custard. So comforting and satisfying.

For a vegan or plant-based custard recipe check out our jam and coconut sponge recipe.

How To Prepare A Vegan Scottish Smiddy Dumpling or Sultana Cake

How do I store smiddy dumpling?

Staler slices of dumpling can be refreshed by toasting on a dry hot plate such as a panini hotplate or a dry fry pan/skillet. Add a pat of vegan butter to the pan if liked. Toast until nicely warmed through.

Or place slices in a warm oven just until heated through. Spread some vegan butter or margarine over to melt or serve with hot custard or a drizzle of vegan cream.

A slice of toasted smiddy dumpling is delicious served along with a vegan cooked breakfast.

Can I freeze smiddy dumpling?

Yes. Wrap well and place in the freezer for 3-4 months. Unwrap before defrosting (not in the fridge) to room temperature.

Whole smiddy dumplings can be frozen or sliced into portions with a piece of greaseproof paper between each slice. Freezing slices makes it so much easier to just pull out one or two servings at a time. 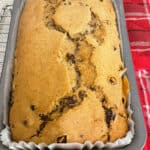 Print Recipe
A smiddy dumpling may be a curious name for what is essentially a baked sultana pudding cake similar in flavour to delicious fruit loafs or tea cakes, as well as the more well known Scottish clootie dumpling. Easy and simple to prepare, a slice is perfect for the festive season, Hogmanay (Scottish New Year) buffets, New Years and Robert Burns Day suppers. Or just whenever you fancy something tasty with your cup of tea or coffee.Serve with a dollop of your favourite fruit jam/jelly or a good helping of hot custard.
Course Afternoon tea, Dessert, pudding
Cuisine Scottish
Prep Time 10 mins
Cook Time 1 hr 20 mins
Total Time 1 hr 30 mins
Servings 8 slices
Calories 335
Author Jacq