Time, energy, and money is saved by using a ready-prepared puff pastry to prepare the pie topping, while the simple but richly flavoured vegan meat and potato stew filling bubbles away on the stove to tasty perfection.

For gluten-free vegan meat and potato pie use a gluten-free pastry either puff or shortcrust, or instead opt for a root veggie mash or hotpot style top.

The pie filling is also packed with creamy potatoes, sweet onions and carrots, and an irresistibly crunchy and buttery pastry. This veggie meat and potato pie is just simply tasty and a sure-fire family favourite.

What is a meat and potato pie?

A meat and potato pie is a traditional English pie dating back to at least the 1800s. The pie is prepared with chunks of beef meat or minced meat, and commercially produced meat and potato pies may actually contain more potatoes than meat.

The pies can be prepared with a short crust pastry, puff pastry, or a suet crust pastry, and are more likely to be found as individual small pies which are more convenient for take-aways, snack bars/vans and eating on-the-go.

In Britain, meat and potato pies are a common product found in most supermarkets, bakeries, fish and chip shops, cafes, snack vans and pub grub menus.

This vegan meat and potato pie features dried soya chunks otherwise known as TVP [textured vegetable protein] as the meat alternative. Soya chunks are similar to dried soy curls that can be found in the US, so soy curls can be an ideal soya chunk replacement. Alternatively for a soy free dried chunk try the pea and fava protein chunks which can be found in many wholefood stores in the UK.

Soya chunks are perfect to replace the meat chunks in a pie, as the soya chunks act like flavour sponges soaking up all the juicy tasty flavours that are added to the home-made stew whilst the stewing softens up the soya chunks beautifully.

The first time you try cooking with soya chunks you may be unsure of the texture but do persist as it does get better, honestly! I was just the same with soya milk, the first few tastes I had were squeamish and I did not enjoy the flavour at all, but with perseverance I now love all kinds of plant milk and they all taste normal. It can be the same with vegan cheese, the texture can be a little off putting at first, but in time it can become more appealing. If your new to plant-based and vegan diets then don't give up at the first try, as taste buds and preferences do actually change.

Potatoes, carrots, onions, and garlic, along with the soya chunks are the main everyday ingredients for this easy vegan meat and potato pie.

Soy sauce, marmite [or yeast extract as its sometimes labelled in UK supermarket own brands], dried herbs, red wine vinegar and tomato puree, along with plain flour to thicken up the home-made gravy, all work together to infuse the veggies and soya chunks with delicious savoury flavours.

A ready-prepared puff pastry block was used for the veggie pie topping as its so convenient, easy, and can be inexpensive if you choose a vegan-friendly supermarket own brand. Besides, results are almost guaranteed as opposed to trying to prepare your own puff pastry which can be an all-day job using lots of expensive ingredients. Already prepared puff pastry is good enough for celebrity chefs so I can't see an issue unless of course you'd really like to prepare your own pastry.

How to prepare vegan meat and potato pie

This vegan meat and potato pie would be perfect for vegan Christmas and festive dinners, as well as New Years Eve/Day dinners.

Thanksgiving, harvest and Easter celebrations are also ideal times for vegan pie, but then again in our family any day is perfect for a tasty home-cooked veggie pie.

This recipe uses dried soya chunks or TVP [textured vegetable protein] which is usually only one ingredient: defatted soya flour. Soy curls are a good alternative as are dried pea protein chunks.

Alternatively fresh or frozen meat alternative chunks/pieces can be used [about 300-350 grams should be plenty] or use chopped up cooked veggie sausages or burgers [add these at the end of cooking].

Although if you really don't want to use any of the above vegan meat replacements simply opt for a nice packet of juicy mushrooms [just add these whole or chopped along with the veggies].

First soak the soya chunks in a few cups of hot veggie stock and an optional teaspoon of marmite [yeast extract] for about 30 minutes.

[If using soy curls or pea protein chunks then rehydrate according to package instructions.]

Add the potato, carrots, onions, and garlic to a large pot and cook in one tablespoon of oil [or ½ cup of veggie stock] for 8 minutes.

Stir through the plain flour [or all-purpose or gluten-free], and then add the tomato paste and dried mixed herbs.

Drain the soaking liquid from the soya chunks, and add extra boiling water to make up to 700mililtres [about 3 cups].

Chuck the soya chunks into the pot.

Bring to a simmer and cook for 25-30 minutes until the veggies are soft and the gravy is rich and thick.

Pour the veggie stew into the pie dish or baking dish.

Grease the rim of the dish with some vegan margarine.

While the stew cools, prepare the pastry top.

Cut a small piece off the pastry block and roll out thin, long, snake like shapes, enough to go around the pie dish rim.

This will form the pie crust rim in which the pastry top will be pressed into.

Press the pastry rim around the baking dish, it will stick and mould onto the greased rim.

Brush the pastry rim with some plant milk.

Roll out the rest of the pastry block into a shape that will fit the top of your dish.

Brush the top with plant milk and with a knife create two pie slits to allow steam to escape whilst baking.

Bake for 35 minutes or until the pastry is golden and has risen.

Leftover pie can be stored within the refrigerator for 3 days. Keep the pie in the original baking/pie dish or transfer when completely cool to another container. Cover with food wrap or similar.

If the pie was stored within the pie or oven dish then bring the pie up to room temperature before reheating within the oven. Switch the oven to the cooking temperature, and cover the pie with some kitchen foil as this will prevent the pie from over browning or burning in the oven. Reheat until the pie is piping hot throughout.

Slices of leftover pie can be reheated within an air-fryer, but do consult your air-fryer manufacturing booklet for advice on times and cooking temperatures for your particular air-fryer model.

What can I use to replace soya chunks?

* any fresh or frozen vegan meat chunks or pieces

* cooked vegan burgers or sausages, chopped into chunky pieces [stir these after the stew filling has cooked]

* 1-2 cans [400g/14-15oz drained] of drained beans, such as butterbeans, cannellini or haricot beans [the drained weight will be smaller than the weight stated on the cans so if using home-cooked beans use about 300-400 grams of cooked beans]

* packet of fresh mushrooms, such as button, chestnut or regular mushrooms [keep small mushrooms whole and add these along with the veggies for the stew filling]

What are the nutritional profile of soya chunks?

Soya chunks can be a great source of vegan nutrition as for each 100 grams of dried chunks there are about 323 calories, 51 grams of protein, and 17 grams of fibre.

Best of all as soya chunks are a byproduct of soybean oil production, the end result means that the chunks are mostly fat free, hence the ingredients on a packet of soya chunks is often just one ingredient: defatted soya flour. Although some packets of dried soya chunks already come with additional savoury flavours.

Soya chunks offer lots of useful nutrition for a low cost when compared to meat, as one 500 gram bag can easily be enough for 4-5 different recipes, that would feed 4-6 servings for each meal.

Where can I buy dried soya chunks?

Most wholefood stores or health shops in the UK have soya chunks for sale. Although they may be labelled TVP [textured vegetable protein]. In the US soy curls [textured whole soy beans] can be found instead which are a different curly thinner shape compared to the ball-like shapes of soya chunks.

If you can't find soya chunks in your local stores, then Amazon UK usually have some for sale, as do buywholefoodsonline.com.

Do I need to use the pastry for this pie recipe?

Of course not. If preferred this recipe can be simply served as a vegan meat and potato stew without the pastry topping.

Alternatively, add a root vegetable scalloped hot-pot style topping. Such as thin sliced turnips/rutabagas/swedes,carrots, parsnips, and/or celeriac. Blanch the thin sliced veggies in boiling water for about 5 minutes or until the veggies are almost fork tender [depending on how thick they are sliced]. Then drain and use the sliced veggies as a topping, overlapping the veggies in a fish scale type of pattern. The topping can be seasoned with salt and pepper, with perhaps little dots of vegan margarine or butter added, or brush the top with melted margarine. A sprinkling of nutritional yeast flakes or vegan cheese is a nice touch. Bake in a hot oven until the veggies are soft and tinged with golden pieces.

Another idea is to prepare a vegetable mash topping with a combination or one or two of the following: [prepare the mash as you would ordinary mashed potato]

* peas and sweetcorn [just mix these through any mash you prepare, shredded cabbage, chopped kale, or sliced Brussel sprouts can also be stirred through mashed veggies]

Is this vegan pie safe for a gluten-free diet?

Dried soya chunks are naturally gluten-free as they usually have one ingredient: soya flour. But do double check just to be sure as different brands may vary.

What are the best potatoes to use for a pie filling?

Potatoes which cope well with cooking and do not tend to fall apart are perfect for pie filling, as the bite of the potato adds to the pie filling texture.

For this pie recipe we used a new potato otherwise known as baby potatoes, and as these are not intended for mashing and are waxy potatoes they kept there shape.

Other types of potatoes good for pies are:

[an English classic remade into a tasty veggie adaptation]

[fun simple pie that the whole family will love]

[perfect for using up all the leftover Christmas and festive veggies] 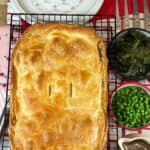 Print Recipe
Vegan meat and potato pie recipe is just vegan comfort food at its best. As well as great for everyday meals, it is also ideal for extra special meals such as for Thanksgiving, festive, Christmas and Easter time. In Scotland, it is traditional to have a New Years Eve steak pie or a pie for New Years Day dinner so this tasty veggie adaptation is the perfect way to welcome in the new year.
Course Dinner
Cuisine British
Prep Time 30 mins
Cook Time 1 hr 15 mins
Total Time 1 hr 45 mins
Servings 6 to 8 slices
Calories 655
Author Jacq

At end of cooking filling