This vegan green lentil and veggie pie with a vegetable suet top crust is inspired by the traditional Scottish Teviotdale pie that originates from the Scottish Borders.

Green lentils and veggies are cooked within a rich savoury sauce before being topped with an easy suet crust pastry batter, that bakes into a tasty doughball or cobbler texture.

This cozy hearty veggie pie is a deliciously easy budget-friendly family meal that will easily fill up hungry bellies and create happy smiles!

Serve this vegan Teviotdale pie with your favourite veggies and savoury gravy. We had buttered mashed neeps or turnip [otherwise known as swede/rutabaga], and steamed green cabbage, and an onion gravy made with the cooking veggie liquid.

What is a Teviotdale pie?

A Teviotdale or a Teviot pie is essentially a one crust pie with a simple seasoned mince and onions filling topped with a beef suet pastry crust. The pie originates within the Scottish borders in the area known as Teviotdale and Liddesdale. Hawick is the main town and is rich in history dating back to medieval times.

As with most traditional humble and rustic pies the Teviotdale pie would have been created to make the best use of the frugal ingredients that were readily available, and provide calories to feed hungry workers and growing families.

The suet crust makes a nice change from the usual short crust or puff pastry pie toppings, and is similar in taste and texture to light, fluffy traditional stew dumplings but with crispier and chewier baked edges.

This vegan Teviotdale pie adaptation uses green lentils instead of beef mince, and includes onions, diced carrot and celery for a tasty flavour boost and extra texture. Mushroom stock or broth provides savoury yumminess, but this can be replaced with a vegan 'beef' flavour stock or simply just use a vegetable stock.

The pie crust is traditionally prepared with flour, cornflour, beef suet, and dairy milk. For this vegan Teviotdale pie version vegetable suet and oat milk, [or your usual milk] is used instead.

The suet crust is so easy and quick to prepare as the ingredients are simply mixed together into a batter, with no kneading or forming a pastry dough required. Once the suet batter is prepared it it spread over the lentil filling and baked. So easy.

If vegetable suet is difficult to source or may be too expensive, then a block of vegetable shortening or vegan butter can be frozen and then grated/shredded with a cheese grater. Stork baking spread also comes in hard blocks and this can also be frozen and grated. This will provide small pieces similar to suet.

Cornflour or cornstarch and replacements

Cornflour is a commonly available ingredient in the UK, although in recent times many people are finding this product increasingly difficult to source. In the US and other countries our cornflour is termed cornstarch and it is just the same thing.

If cornflour is difficult to find then try replacing it with ground rice or rice flour, potato flour or starch, tapioca flour, or arrowroot powder. Alternatively simply use extra self-raising flour, although the cornflour does lighten up the crust, the crust will still be tasty.

This veggie pie can be prepared with either 3 cans of drained 400 grams [15oz] green lentils, or 250 grams of dried lentils, which makes around 690 grams of cooked lentils.

If your new to suet crusts then don't let a suet crust put you off! As its so simple and easy to prepare.

Its just a matter of stirring the ingredients together into a thick batter before spreading it out to cover the filling.

If cooking your own lentils, add the lentils to a saucepan along with one or two bay leafs and a litre [4 cups] of cold water.

Bring to the boil and cook for 25 minutes or until soft.

Drain the liquid but do reserve it as it can be added to the vegetable stock.

To prepare the pie filling, cook the diced celery, carrot, onion and garlic in one tablespoon of olive oil for 8 minutes.

Or replace the oil with a little veggie stock/broth.

Pour in 375 millilitres [1 ½ cups] of water and simmer for 10 minutes or until the veggies are soft.

Season with salt and pepper.

Stir through the cooked lentils and cook for 15 minutes until the sauce is reduced.

Decant the lentil filling into the casserole dish and leave to cool a little while the suet crust is prepared.

Sift the flour, baking powder, and cornflour into a mixing bowl. Add the vegetable suet, a few pinches of salt, and fresh thyme leaves.

Pour in the oat milk [or your usual milk] and stir until combined.

Scoop the batter over the lentil filling evenly.

Bake for 30-35 minutes until risen, golden in places, and a cracked appearance may form as the top of the pastry dries out in the oven.

Underneath the crisp pastry the suet crust will be light and fluffy similar to baked savoury doughballs or a cobbler topping.

Enjoy with your favourite veggies and lots of gravy.

Vegan Teviotdale pie can be stored within the refrigerator for up to 3 days. Or freeze portions for up to 3-4 months.

To reheat add to an oven-safe dish and cover the pie with kitchen foil.

To speed up reheating remove the pie from the refrigerator 30-60 minutes before reheating, as this will remove some of the chill on the pie.

The pie can be reheated within a microwave but do bear in mind that this may change the texture of the suet crust topping. 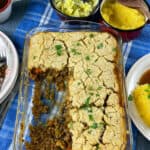 Prepare the lentils: [or use three 400 gram/ 15oz cans of green lentils, drained, you may have some lentils left over. If canned lentils are used then omit the next stage and go straight to the prepare pie filling]

Prepared this vegan adaptation of a traditional Scottish Teviotdale pie?

Do let us know how you got on with the recipe by leaving us a comment below, and clicking the star ratings.