Fairy bread is a traditional well-loved Australian party food that makes an appearance at most kids birthday parties. No exact recipe is required as there are only a few simple ingredients bread, a spread and some cake sprinkles.

That's it! So simple, quick and easily customizable to dietary and budget restrictions such as gluten-free, no-dairy, and no-egg.

Australians don't really need to read about how to make fairy bread as they even have a National Fairy Bread Day on the 24th November!

However, many people are unaware of fairy bread and its such a good vegan party budget food idea that kids will love to prepare, that it deserves more recognition.

Fairy bread and some nice juice or a glass of chilled plant milk is an easy budget-friendly way to make an occasion extra special for kids.

For Halloween it could be called Scary Fairy bread!

Fairy Bread originates in Australia and New Zealand and dates back to at least April 1929 when an article appeared in the Australian newspaper Hobart Mercury that reported on a children's party that was being held at the Consumptive Sanatorium [hospital for TB patients].

The children were being treated to a menu that began with Fairy Bread which was bread and butter that had the cake sprinkles hundreds-and-thousands scattered over.

Another Australian newspaper article from the Otago Daily Times [15th December 1936] outlines what to feed young children on Christmas Day. For teatime it was recommended that:

''slices of Fairy Bread (thin bread and butter sprinkled with non-pariels), with plain sponge cakes and the usual drink of milk, should constitute the full meal''

Non-pariels is a French word that refers to the tiny candy balls, [cake sprinkles] that mainly consist of starch and sugar.

Crust or no-crust for Fairy bread?

Many Australians would argue that Fairy Bread should always retain the crusts but of course these can be removed if preferred.

The crusts can always be used as breadcrumbs and stored within the freezer to add to recipes, so nothing needs to be wasted.

Fairy Bread Day, 24th November, has been celebrated in Australian ever since 2014 and is a day to appreciate the Australian culture of Fairy bread, as well as to raise money for the Australian youth mental health charity ReachOut. So this November is the perfect time to bring some Fairy bread into your life!

The Scottish poet Robert Louis Stevenson [1850-1894] wrote about fairy bread in one of his children's poems, although whether the fairy bread mentioned within the poem is the same as the Australian fairy bread is still in question.

Fairy bread can be temporarily renamed 'Elf'bread and enjoyed along with a North Pole breakfast on the first of December or Christmas Eve.

Or perhaps the Elf on the Shelf can prepare some messy Fairy or 'Elf' bread one morning during December!

For addition fun use cookie cutters to create cute shapes and figures.

Hagelslag is a traditional popular Dutch breakfast. The origins of Hagelslag date back to to the early 1900s when a Dutch sweet/candy company invented aniseed flavoured sprinkles that were intended as a sweet bread topping.

The name Hagelslag translates from Dutch to mean 'hailstorm'.

In 1936, another candy company created sprinkles made with chocolate after a young boy wrote a letter to the company asking for a chocolate bread topping.

Nowadays, Hagelslag is a very popular breakfast food for Dutch kids and adults. The bread is often toasted before spreading with butter and sprinkling with Hagelslag.

The Hagelslag sprinkles come in a variety of flavours including chocolate, chocolate flakes, aniseed, and several different fruit varieties.

So what came first the Australian Fairy bread or the Dutch Hagelslag?

Who actually invented Fairy bread the Australians or the Dutch is an an-going debate! Although both versions appeared around the same time in the 1930s so perhaps it was a coincidence.

It likely doesn't matter as they both are equally as tasty!

And Robert Louis Stevenson, the Scottish poet, throws a spanner-in-the-works with his mention of Fairy bread within his 1885 poem!

How to prepare vegan fairy bread

A recipe is not really needed for Fairy Bread as its so simple to prepare.

White bread is traditionally used but I initially tried my first batch of Fairy bread with half-n-half which is half white and half wholemeal bread, as that's what I had to hand.

Although, I did try the Fairy bread with thick white bread and it was so much better as it actually resembled a doughnuts texture and flavour. Although with much less fat and sugar compared with an ordinary doughnut.

Fairy bread is perfect for when you have a doughnut craving.

Cover the bread with sprinkles by either using a small spoon and scattering them over. Press the sprinkles firmly onto the spread.

The bread crusts can be removed or kept on.

Slice into triangles or squares.

How to prepare Hagelslag:

To prepare a slice of Dutch Hagelslag the method is the same as the Australian Fairy bread.

Chocolate sprinkles replace the hundreds-and-thousands, and the bread can be toasted or untoasted.

A glass of chilled oat, soya or your usual milk is the perfect accompaniment to Hagelslag, and would make a nice special occassion breakfast such as for a birthday.

We used the Co-op Farmhouse white loaf that retails at £1 [at time of writing], and is labelled vegan.

Australian Fairy Bread or Dutch Hagelslag is at its best eaten soon after it is prepared, but it will keep for a few hours at room temperature if required for a buffet or party.

Can Fairy bread be frozen?

I would not recommend freezing bread that has cake sprinkles added as the method is so simple that it can easily be prepared just before eating, and the sprinkles may react to the moisture within the freezer. However, bread with nothing added does freezes very well!

Is Fairy Bread suitable for a gluten-free diet?

Yes! Although a gluten-free bread will need to be used as well as gluten-free cake sprinkles.

What type of bread should I use for Fairy Bread?

The traditional type of bread for fairy bread is a white one. White bread gives the best flavour and texture when spread with butter and sprinkles, as the bread is transformed into a doughnut-like treat.

However, feel free to use whatever bread you prefer either shop-bought or home-baked.

Are cake sprinkles suitable for vegan and gluten-free diets?

There are vegan and gluten-free cake sprinkles available but you may have to look online for special colours and shapes as supermarkets and stores will likely only have a few available, if any.

Although, it is worth checking the ingredients of the cake sprinkles that are available locally, as some may be accidentally vegan even if they are labelled as vegetarian.

When looking for vegan sprinkles do look out for these ingredients which indicate that the cake sprinkles are not vegan:

*milk or other dairy products such as whey powder and lactose

Do I have to use butter or margarine for Fairy Bread?

Traditional fairy bread is spread with butter or an equivalent such as margarine. Vegan butter is readily available in most supermarkets and stores.

However, if preferred a different spread can be used instead.

* a different type of nut butter

What could I use as a natural home-made cake sprinkle?

If you prefer not to use cake sprinkles but would still like to try out the concept of sprinkled Fairy bread or Hagelslag then try one of these ideas:

* desiccated coconut [especially tasty on bread that has been spread with a nut or seed butter, or vegan chocolate spread]

* raisins, sultanas or currants [if you have the patience slice these up so that they are smaller in size!]

* lemon, orange or lime zest for a zesty kick!

* vegan chocolate [grated/shaved] over the bread 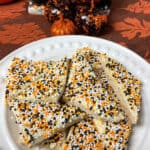 What are your thoughts on Fairy bread or Hagelslag?

Do drop us a comment below and let us know how you got on.

Sharing a photo of your Fairy bread on social media?

So we can admire your creation!