What is a British old school cheese flan?

A flan is a pie that is open, in that it has no pastry top that covers the filling.

A cheese flan is similar or just the same as a Quiche which in essence is a mixture of eggs, cheese, milk, and sometimes cream cooked within a pastry shell.

The term British Old School Dinners refers to the school canteen food that was provided to school children during the 60s/70s/80s and sometimes the 90s.

School dinners back then tended to be more like homecooked traditional meals and were all prepared in the school kitchen by dinner ladies.

Nowadays, most of the school foods offered are more than likely to have been precooked before they arrive at the school.

Many people have fond memories of their school dinners and can usually remember at least one or two favourite meals or bakes, while others disliked school dinners or can recall one or two of the worst offerings!

Many who experience school dinner nostalgia like to recreate their favourite school meals, and as taste buds change over the years perhaps what you disliked back then may become a favourite now!

Even if you were a meat, dairy, or egg eater back in your school days, you or a family member may now be enjoying a vegan or plant-based diet, so with vegan versions of old school dinner recipes you can recreate your favourites and perhaps discover new tasty recipes.

For this vegan cheese flan recipe there is no need to pre-bake or blind bake the home-made pastry case. as it cooks together with the filling.

If preferred, and if you'd like to save time, shop-bought shortcrust pastry can be used instead of preparing your own.

Add the flour, baking powder and salt to a mixing bowl, along with the margarine broken into chunks.

Using your finger-tips rub the fat into the flour until the mix resembles breadcrumbs.

Add two tablespoons of water and stir this through with a cutlery knife.

Add a little extra water and stir this through and then press the dough together into a ball.

Wrap the dough in food wrap and chill in the refrigerator for at least 30 minutes.

Blend until everything is smoothly combined.

Place the pastry ball onto a well floured work surface and roll out to a flat piece bigger than your flan tin.

Wrap the pastry around your rolling pin and lift it up and place into the flan tin.

Press the pastry dough into the flan tin.

Trim the ragged edges with a small knife.

Pour the flan filling into the pastry.

Bake for 45-50 minutes until the flan has risen, is firm and set, and golden brown around the edges.

Once baked leave the flan to sit for 10 minutes before removing from the flan tray.

Traditional accompaniments to cheese flan are potato chips/fries and baked beans. A nice salad is also a tasty side.

Cheese flan will keep fresh for 3 days within the refrigerator. Or freeze for 3-4 months.

To reheat, switch the cooker to the cooking temperature, and warm the flan up until its piping hot. Or microwave for a few minutes. Alternatively, use an air-fryer to reheat until hot throughout the flan.

Although, this cheese flan is absolutely delicious served chilled.

What kind of tofu is best for vegan cheese flan?

Silken firm tofu is different from ordinary fresh tofu found within the chilled section of stores, as silken tofu can not be sliced into firm pieces and cooked as it is so soft that it just breaks up.

Silken tofu is usually found within the Asian or world food sections of supermarkets and grocery stores. This kind of tofu is long-life and does not need to be kept within the refrigerator, unless it has been opened.

Do I have to precook the pastry case?

No, for this cheese flan recipe the pastry does not require pre-baking or 'blind' baking. The pastry will cook beautifully and will not have a soggy bottom! Instead the pastry will be deliciously light and buttery.

Can I use shop-bought pastry for cheese flan?

Of course, if you are short of time or prefer not to make your pastry by hand at home, then simply buy a store-bought already prepared shortcrust pastry.

There are even some packets of pastry that come already pre-rolled. Just make sure that the pastry is short crust and is suitable for vegans.

Many of the popular brands of pastry and supermarkets own versions, are accidently vegan even if they do not have the trademark vegan sign, so its always worth at look at the less expensive options.

Once chilled this vegan cheese flan is perfect for packed lunches for school, college, or work, picnics, parties, buffets, and everyday quick and easy vegan lunches, dinners or tasty snacks.

Got some leftover unbaked pastry that needs using up? Bake a few of these traditional British Jam Tarts. Just pop them in the oven after the flan comes out. Or stick the jam tarts into the oven to bake, during the last 10 minutes of the flan cooking. 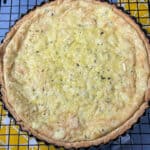 We would love to know how you got on.