Who needs to order in when you can easily and quickly whip up a tray of amazing loaded potato wedges?

Also great as a light lunch or dinner, or serve as a side dish as part of a larger Mexican themed dinner or party.

Nachos were invented in 1940 by Ignacio Agnaya who worked in a Mexican restaurant and had the nickname of nacho. However, Nacho's are not exactly 100% Mexican in origin but are claimed as a Tex-Mex dish.

One day Ignacio found himself without a chef but with hungry guests in the restaurant waiting for food. Corn tortilla chips, jalapenos and cheese was all that Ignacio could find to serve so he combined them together and baked this new concoction until the cheese melted. This new dish was named Nachos.

Many variations of nachos with different toppings and sauces have since emerged and replacing tortilla chips with potato wedges is a popular choice.

Adding lots of different toppings to nachos transforms the dish into a loaded nachos.

Nacho's are popular served as game day snacks especially with the Super Bowl, nacho themed bars at parties and buffets, family snack for movie nights, and as a side dish with other Mexican tasty meals.

In memory of Ignacio Agnaya's and his delicious invention, the 21st October is now celebrated as the annual International Day of the Nacho.

Nacho's are so loved that they actually claim many more days such as the US National Nacho Day (6th November) and the International Nacho festival (October 13-15th).

So we have plenty of excuses during the winter months to enjoy delicious nachos and loaded potato wedges or fries.

It's easy to prepare these loaded potato wedges but there are also a few shortcuts that can be taken, such as choosing shop bought vegan guacamole and salsa.

This recipe uses the nutritious and tasty humble potato to prepare a delicious fake-away. I love potatoes as they are just so inexpensive and versatile. And you can make a delicious meal of them as the hero ingredient.

Firstly, the potatoes are sliced into wedge shapes, placed into a bowl, and mixed with garlic powder, onion powder, paprika, dried mixed herbs (or Italian seasoning) and salt.

I recently sourced some Mexican oregano and replaced the mixed herbs with my latest loaded wedges batch and it was pretty tasty.

These potato wedges do not require oil to roast but if you prefer mix through 1-2 tablespoon of olive oil along with the spices and herbs. The wedges are baked for 25-40 minutes until golden and soft, exact times depend on how thick the potatoes have been cut.

Once the potato wedges are cooked, they are set aside until the topping is ready.

While the potatoes are baking, the black bean topping is prepared with fresh onion and garlic, cumin, chilli powder and a little salsa. I cook this combination with a little veggie stock but olive oil can be subbed if you'd prefer.

The bean topping is added to the potato wedges, along with rocket/arugula leaves, and finished off with a sprinkle of shredded vegan cheese, before being baked for 10-15 minutes, until melted, crispy and golden. Sliced spring or green onions can replace the rocket.

To accompany these amazing wedges a really easy guacamole recipe is provided which just consists of mashed avocado, with fresh lime juice, cumin, fresh coriander and diced sweet cherry tomatoes. Or for convivence a shop-bought vegan guacamole can be used.

The black bean loaded wedges are topped with extra rocket or spring/green onions, and served with the fresh and zingy guacamole and shop-bought salsa.

So tasty, easy and quick.

What is a fake-away?

I know this will seem like an obvious question to some but for others, including myself not too long ago, are unaware of the term fake-away.

A fake-away is simply a take-out themed meal that is prepared at home. Any of your favourite take-outs can be easily recreated at home often for a fraction of the cost.

How do I store leftover loaded potatoes?

Leftovers can be placed in the fridge for 3 days.

Enjoy warmed through but these wedges are also really tasty chilled straight from the fridge.

Not that I have many leftovers as my kids devour them all! Perhaps its a good idea to prepare a double batch.

Add small amounts of leftovers to a salad for next days lunch.

Leftovers can be placed back into the oven at the cooking temperature, and reheated until piping hot. Place some kitchen foil over if your concerned about the wedges browning too much.

Or enjoy chilled straight from the fridge as a quick snack.

Can I add anything extra or substitute an ingredient?

* If your not keen on black beans then sub these out for your favourite bean. Pinto or kidney beans would be ideal.

* use shop-bought guacamole, to save time preparing and often its less expensive if fresh avocados are particularly expensive where you live or they are out of season.

* instead of salsa, simply fine chop fresh tomatoes and season with salt and pepper.

* instead of rocket/arugula for the garnish use spinach

What can I serve with loaded potato wedges?

Serve these loaded wedges as a side-dish, stand-alone light lunch or snack.

A few ideas for accompaniments:

Is this recipe gluten-free?

It is simple to prepare loaded potatoes as gluten-free. Simply check that any spices or spice blends that you may use are free of gluten and wheat ingredients.

Absolutely. Anything that is labelled vegan is also great for vegetarians.

What kind of potatoes are best for wedges?

Any type of potato that you would normally use for jacket/baked potatoes, chips/fries or roast potatoes are great for wedges.

Just don't use any green potatoes!

And if the skins are fine leave these on for extra nutrition, flavour and texture. 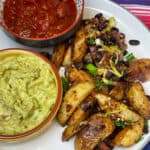 Next prepare the guacamole: