Traditional vegan vanilla British fairy cakes are based on the classic little cakes that everyone loves at a party or picnic.

It's so easy and quick to whip up a batch of these retro cakes which are perfect for picnics, parties, buffets, pot-lucks and cake sales.

A tasty fairy cake is a fun addition to pop into a lunch box to enjoy at school, college or work!

Each bite of these classic fairy cakes are packed with pops of sweet vanilla flavours and incredible moist and pillow like textures. So tasty topped with a simple water icing and a wee sweetie or candy.

Fairy cakes are part of British childhood and are perfect for kids to bake with supervision.

Fairy cakes more than likely originated from cupcakes. Cupcakes have been around since at least the late 1700s. Cupcakes got their name because of the little cup vessels or moulds that were traditionally used to bake the cakes.

A recipe for cupcakes was found in the first ever American authored cookbook ''American Cookery'' written by Amelia Simmons in 1796. Previous cookbooks in America were all by British authors.

Nowadays, in the US cupcakes are similar to the British fairy cake. But the US cupcake is often much larger and with more elaborate icing decoration.

This recipe for vegan British fairy cakes result in 16 little cakes that have a light, fluffy vanilla sponge, topped with water icing and a jelly tot sweet or candy.

Incidentally, Rowntree jelly tot sweets have always been vegan. Jelly tots were first produced in 1965 but its only recently that they have begun to display the sweets vegan status on the packaging.

My family's latest batch of fairy cakes feature the Rowntree Kola jelly bears and they are very delicious and cute little sweets.

Instead of topping your fairy cakes with a sweet they can be decorated with the classic old-school topping of strawberry jam (jelly) and sprinkled with desiccated coconut. So cute and irresistible!

Vegan cake sprinkles are also a good idea for shaking over the water icing and will look amazing along with a party food spread or buffet.

How do I store vegan fairy cakes?

Store your fairy cakes within a cake tin or plastic food container for up to 3-4 days.

Can I freeze fairy cakes?

Although it is best to freeze fairy cakes un-decorated, for up to 3-4 months.

However water icing does freeze well so fairy cakes with water icing that has set (become firm and not runny) can also be frozen if required. 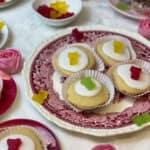