Slow cooker vegan Scottish mince and tatties is a scrumptious, nutritious, and comfort food meal that is so easy to prepare as everything is chucked in the crock-pot and left to bubble away.

Everyone will love the rich, thick, deep savoury gravy and creamy potatoes.

Serve with peas and perhaps a wedge of crusty bread to soak up the plant-based gravy yumminess.

Scottish slow cooker vegan mince and tatties is what you need during those dark and cold days when your dreaming of a bowl of comfort food waiting for you at home.

Mince is more commonly known as ground meat in the US, and is usually made with beef. Mince originates way back to medieval Britain (1066-1485) where it was termed mincen which translates to chop small.

Scots have been eating mince and tatties (potatoes) for centuries. Although potatoes did not exist in Scotland before the mid 1700s. After the introduction of potatoes they soon became popular as they were perfect for the Scottish soil, as well as being cheap and easy to grow.

Fast forward to modern times mince and tatties is still an inexpensive, easy and quick dish.

Mince is basically beef mince cooked with carrots and onion in a little oil or lard, before water is added, and everything stewed until cooked.

A stock cube (usually a beef oxo cube) or gravy powder (generally the Bisto brand) is often added to flavour or thicken the liquid. A dash of salt and pepper to taste is generally a unanimous addition.

The tatties are the fond name us Scots give to potatoes, and these are simply boiled and eaten whole or mashed, alongside the mince.

However, there are many variations of the dish depending on the area of Scotland. Some add carrot or peas, others just onion and if your really fancy a garlic clove is chucked in! Others add a few dashes of brown sauce or Worcester sauce for extra flavour.

The addition of a tablespoon or two of oats to stretch out the mince is a popular hack for particularly frugal Scots.

This recipe for Vegan mince and tatties is prepared with Textured Vegetable Protein (TVP) which is simply defatted soya, with no added ingredients. TVP is a common ingredient and can be found in many large supermarkets (UK). Although I do know this ingredient can be located in the US also, and it is very similar to the soy curls more common in the US.

Other flavourings are tamari soy sauce, vegan Worcester sauce, marmite, vegan beef stock powder and a little tomato paste. A few tablespoons of vegan gravy powder is added to thicken up the stock. Everything stews together to create the most wonderful flavourful savoury veggie mince.

Mince and tatties are the perfect meal to serve at a Robert Burns meal/Hogmanay/ New Years dinner, or other Scottish themed meal.

Is mince and tatties gluten-free?

Yes this recipe can easily be prepared gluten-free. Your vegan stock and gravy powder needs to be gluten-free. Also use tamari soy sauce which is gluten-free. Finally check that your vegan Worcester sauce is free from gluten.

Is vegan mince and tatties suitable for vegetarians?

Of course. Anything suitable for vegans and plant-based dieters is also perfect for vegetarians.

What can I serve with mince and tatties?

Peas! However, a few other ideas:

* wedge of crusty bread such as Irish soda bread (wholemeal)

* mashed potatoes instead of boiled, including mashed sweet potatoes

* a sprinkling of traditional Scottish Skirlie

* if preferred the gravy powder can be subbed for some cornflour/corn starch to thicken up the mince gravy. Use according to the packet instructions that should detail how to make a corn slurry (simply the powder plus some water) to add directly to stews. If you can't source gluten-free gravy this option may be a good step.

Can I prepare this recipe on the stove-top?

Yes. This recipe is easily prepared on the stove-top.

Simply add all the mince ingredients to a skillet or similar pan, excluding the sides, and bring to a simmer.

Add extra veggie stock when required to prevent the gravy becoming too thick.

*If preferred the onion can be sautéed in a tablespoon of olive oil until soft, before adding the garlic, celery, carrot and hydrated TVP mince. Mix everything well, then add the rest of the ingredients and continue.*

How To Prepare Slow Cooker Mince And Tatties:

These recipes can also be prepared on the stove top. 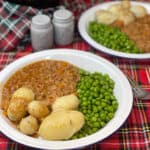 Prepare the tatties and peas: