This Boston Brown Bread recipe is so easy to prepare and steam in the slow cooker. Boston brown bread is a traditional New England bake prepared with plain [all-purpose] wheat flour, rye flour and cornmeal, and flavoured with rich molasses and juicy raisins.

Enjoy a wedge of this vegan brown bread spread with vegan butter, or dunk it into your favourite soup or stew, or toast it and serve with a scoop of home-made Boston baked beans. So tasty and perfect for cosy Autumn meals.

What is Boston Brown Bread?

Boston brown bread also known as brown bread, is a New England traditional bread and dates back to at least the 1800s colonial era.

Brown bread was an inexpensive staple as cornmeal, rye, wheat flour, and molasses were readily available and could be prepared together to create a batter that could be steamed over a fire place.

Not every New Englander had access to an oven but most could use a fire place or even set up an outside fire pit. Even if an oven was available it took many many hours to heat the oven enough to bake anything and maintaining the ovens temperature was a difficult chore. Therefore many colonists would only use their oven once a week and would attempt to get all their baking done at once.

A can shaped mould was used to cook the bread which gave the bread its unique oblong circular shape. Indeed a coffee or baked bean can is a popular more modern mould that can be used to steam or bake brown bread.

In the US B&M the food manufacturing company produce cans of brown bread which is already steamed and ready-to-eat straight from the can. Over in the UK we have nothing like that readily available. But we do have access to tasty recipes and so can easily prepare steamed brown bread at home.

One cup of sweet milk,

One cup of sour.

One cup of cornmeal,

One cup of flour.

Then eat it all up.

Boston brown bread is traditionally sweetened with molasses but if this ingredient is difficult to source, especially if your in the UK, then black treacle can be used instead.

First prepare the sour plant milk by stirring the vinegar into one cup of milk and leaving for 5-10 minutes.

Next, prepare the sweet plant milk by mixing the brown sugar through ½ a cup of milk.

Set the slow cooker to the high setting and pour in 2 cups of water. Place the cooker lid over and leave to preheat while the bread is prepared.

Sieve the cornmeal, rye flour and plain [all-purpose] flour into a mixing bowl.

Tip in the salt, bicarbonate of soda, and baking powder.

Next add the molasses and raisins.

Pour in the sour milk and sweet milk.

Scoop the bread batter into a greased pudding basin.

Top with a circular layer of greaseproof/baking parchment.

Cover with a large layer of kitchen foil, bunching up the top to allow for the bread to rise.

Tightly press the foil around the edges near the top of the basin.

Place the basin into the slow cooker and pour enough hot water into the cooker so that the water level is at least half way up the pudding basin.

Pop the slow cooker lid on and cook for 8 hours on high.

Once ready remove from the cooker and leave the bread in the basin until the bowl is cool enough to handle.

Tip the bread out of the pudding basin and its ready to enjoy.

Boston brown bread can be stored within a food/bread bag or wrapped in a layer of kitchen foil, and stored within a bread bin/container. This bread will store well for 2-3 days.

Older slices can be refreshed within a warm oven for a few minutes, dry fried in a non-stick pan, or toasted.

Brown bread can be frozen for 3-4 months. Wrap well with food wrap and freeze as a whole loaf or as individual slices.

What's the difference between cornmeal and cornflour?

Cornflour is the starch that is removed from ground corn kernels. It is a very fine white powder and is most commonly used to thicken soups, stews and sauces. In the US and other countries cornflour may be known as cornstarch. Cornflour or cornstarch is not the type of flour that is needed to prepare brown bread.

Whereas, cornmeal is the whole of the corn dried and ground to a flour-like consistency. The cornmeal flour can be ground into a fine, medium or coarse texture.

What type of cornmeal is best for Boston brown bread?

Other recipes may call for different types of cornmeal, but for this vegan recipe fine cornmeal is used.

Fine cornmeal is also called fine polenta as the same cornmeal can be used to prepare Italian polenta as well as cornbread.

The brand used for this recipe was Natco Fine Corn Meal and I have included an amazon affiliate link within the recipe card so you can see which one has been used. But of course you may be able to source a cheaper cornmeal in a local shop.

Although, feel free to use any variety or brand of cornmeal that is easily available or that you usually use. Just bear in mind that the texture of the bread may be slightly different if a coarser cornmeal is used, but I wouldn't think it would be too significant.

What type of plant milk is best for vegan sour milk?

The protein content of plant milk varies so certain types such as soya milk react more readily, by curdling, when mixed with an acid such as lemon juice or vinegar. Therefore home-made plant buttermilk or sour milk can be achieved more readily if a high protein plant milk is chosen.

Soya, oat, or almond milk are good choices, but really any plant milk can be used for the Boston brown bread recipe as the aim is for sour milk so curdling the milk is not especially necessary. Mixing the plant milk with vinegar will create a sour flavoured milk which is perfect for brown bread.

Can I replace the raisins in Boston brown bread?

Technically, sultanas [golden raisins] or perhaps currants could replace the raisins if preferred. Certainly there is no need to go out and buy raisins specifically for this recipe if you already have a perfectly good bag of less expensive sultanas in the pantry, and your trying to be frugal. If it was me I would just use the sultanas.

Also, dried cranberries may not be authentic but could replace the raisins especially for a tasty holiday or Thanksgiving themed Boston brown bread.

However, if you really dislike the idea of raisins then simply omit. But they do add delicious moistness and flavour to the brown bread and plump up so much into little gems of juicy tastiness, that they may convince you to enjoy raisins!

What type of molasses is best for brown bread?

The answer to this question differs between people and recipes. Some people prefer black-strap molasses whereas others find it a tad bitter, others prefer using light molasses for baking as it provides less of the rich molasses flavour.

Also, a mix of blackstrap and light molasses may be preferred by some as it provides the best of both bitterness and sweetness.

Alternatively if your in the UK, black treacle could replace the molasses or perhaps use an equal mix of black treacle and golden syrup for a less intense and more sweet flavour.

Although I am from the UK, and used black strap molasses that I purchased from my local health/wholefood store and in my opinion it produced a tasty Boston brown bread. As a bonus, Black strap molasses has valuable nutritional content and so its worth adding to your diet if you like it.

* Baked beans in a tomato sauce 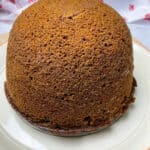 Print Recipe
Enjoy a wedge of this vegan brown bread spread with vegan butter for a quick snack, or dunk the bread into your favourite soup or stew to mop up the juices.Or toast a slice or two and serve with a scoop of baked beans. So tasty and perfect for cosy Autumn lunches or light dinners.
Course Dinner, Lunch, Side Dish, Snack
Cuisine American, New England
Prep Time 15 mins
Cook Time 8 hrs
Total Time 8 hrs 15 mins
Servings 18 slices
Calories 139
Author Jacq

We would love to know how you got on. All comments and feedback very much appreciated.

Snapped a photo for social media?

So we can admire your great cooking!