Seriously you have got to try making these vegan dumplings. They are not heavy or filling but resemble little fluffy pillows of yumminess. 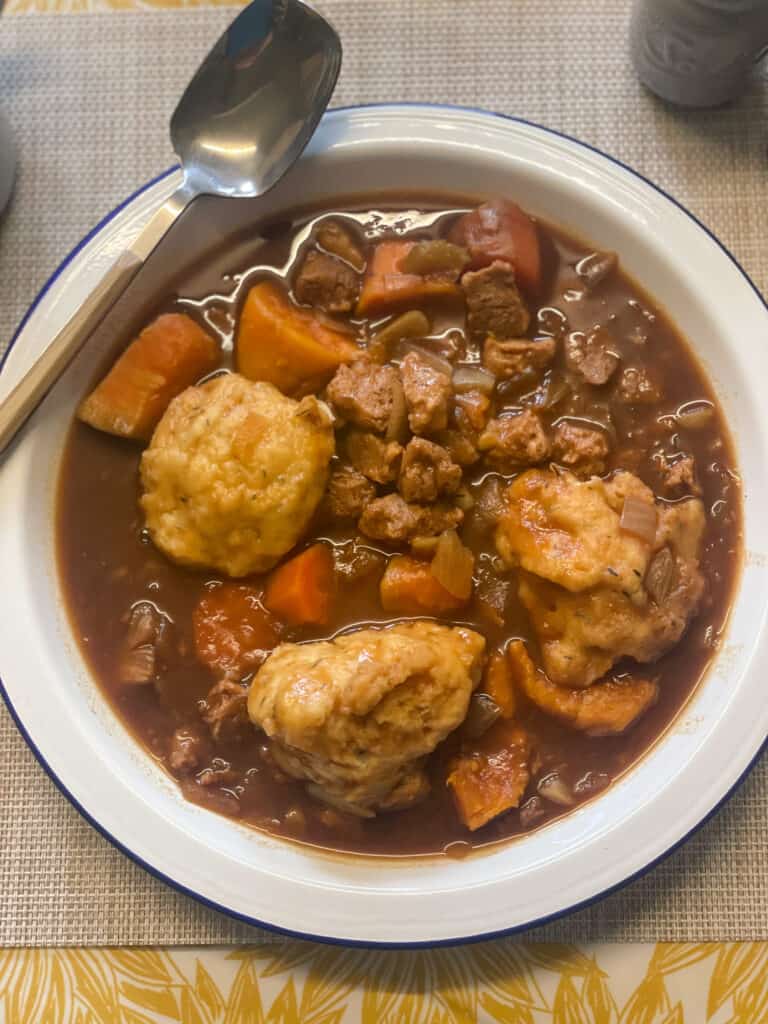 Origins of beef stew and dumplings

A stew is simply a selection of vegetables, pulse, meat, fish, herbs, spices, etc cooked in a flavoured liquid gravy-sauce.

Humans have been preparing stews for thousands of years. Most countries have their own favourite traditional stews.

Dumplings are also a traditional food prepared differently depending on the cuisine.

British dumplings are generally a mix of flour and suet. This type of dumpling has been popular for many hundreds of years. They were commonly used in stews and soups to bulk the meal out as meat was expensive.

For my recipe I have prepared the dumplings with self-raising flour, vegan mayonnaise, plant-milk and dried thyme. This combination works a treat!

You might want to double up the recipe as 2 dumplings per serving may not be enough!  This recipe uses a 3.5 litre (3-4 quart) slow cooker and not sure I could fit in more dumplings but I think I will give it a good try next time!

Textured vegetable protein chunks (TVP) replace the beef element. I love how versatile TVP can be as well as how it soaks up all the delicious gravy flavours. TVP is also really economical and lasts well in the pantry. In the US soy curls can be used instead.

I have chosen to use sweet potatoes as they lend a sweet, creamy taste and texture, and the usual suspects of carrots, onions and garlic!

If you can source the new meat-free beef flavour Oxo cubes then I recommend these for this stew but if not any vegan beef flavour or veggie stock will be fine.

How to prepare vegan 'beef' stew and fluffy dumplings: 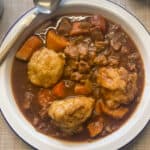