Vegan chicken style stew and fluffy dumplings is just a bowl of pure deliciousness and comfort. This stew is so easy to come together in one pot, and can be ready in just over an hour.

Chicken stew originated thousands of years ago and most countries around the world have their own variations. It is difficult to track down the actual origins of the first chicken stew as humans have been preparing stews for thousands of years. Possibly the first recorded stew was within a Roman cookbook Apicius that was written way back in the 1st century!

Chicken soup, which is similar to chicken stew, dates back even further to 7000-10000 years ago to somewhere in India or South Asia. Again chicken soup has countless variations that can be found around the world. I have a tasty vegan chicken noodle soup recipe that is one of my family's favourites especially whenever we are under-the-weather.

It stands to reason that the history of chicken stew and chicken soup are intertwined as both dishes are so close in nature.

What's the difference between a stew and a soup?

Not much really. However there are a few small differences.

A stew is basically any food cooked within a liquid which could be a broth, gravy, sauce, stock, milk, etc, but this could also describe a soup. However, the ingredients for a stew are generally prepared chunkier and thicker, with more ingredients packed into the liquid. Although again some soups could be described this way!

Stews are generally thickened up with flour or some form of starch but then so are some soups such as chowders.

I would think the main difference between a stew and a soup is that a soup is generally served in a bowl to contain the relatively thinner liquid, while a stew could technically be served on a plate, with sides, and the thick sauce poured over.

This vegan chicken stew is based on the traditional British chicken stew with simple ingredients but an emphasis on creaminess and flavour.

The most amazing airy, fluffy and soft dumplings accompany this stew. Many would argue that the dumplings are arguably the best part of a stew and my kids would wholeheartedly agree!

For the chicken alternative I add vegan Quorn pieces and the flavour and texture work perfectly with this stew. I don't use too many meat-free alternatives but my kids happen to really like the Quorn chunks so I am happy to add them. Although any veggie meat-free pieces will work either dried, fresh or frozen alternatives.

The veggies I choose for this stew are traditional ones: parsnip, potato, carrot, celery, and peas along with the trusty combo of onion and garlic.

I decided a can of cannellini beans should also go in the pot as I like to add beans to most of our meals.

A few teaspoons of dried sage brings amazing aromas and flavour while a few tablespoons of flour thickens up all the tastiness.

This vegan chicken stew quickly comes together in just an hour. For the last 30 minutes the dumplings are added. The dumplings only need a few ingredients: self-raising flour, plant milk, vegan mayonnaise and a few teaspoons of dried thyme. After 20 minutes of steaming on the top of the stew, the dumplings are left for a further 10 minutes on the cooker ring but with the heat off, to finish off their cooking perfection.

How To Prepare Vegan Chicken Stew And Dumplings

How do I store leftover vegan chicken stew and dumplings?

Leftover stew can be stored in the fridge for up to 3 days within a covered container. Or frozen for up to 3-4 months. Defrost completely before reheating.

How do I reheat leftover vegan stew?

Place the stew into a non-stick pan and bring to a simmer, reheat for 3-5 minutes or until piping hot throughout. Stir frequently while simmering. A little extra plant milk, stock or water may need to be added as the stew will likely have become thicker.

* replace the parsnip with celeriac, cauliflower or turnip/swede
* use sweet potato instead of white potato
* or replace the carrot with sweet potato and keep the white potato!
* replace the fresh onion and garlic with a few tsps of the dried varieties
* switch out the peas for broccoli chopped into small florets, sliced asparagus or green beans
* use any type of bean instead of cannellini
* instead of vegan Quorn pieces try soy curls (although rehydrate these before using), tofu, tempeh, seitan, or a different chicken style meat-free chunks. Or simply add an extra can of creamy white beans or chuck in a few juicy whole or sliced mushrooms

What can I serve with vegan chicken stew?

This meal is substantial enough to not need sides, but if feeding extra hungry people then here are a few suggestions:

Serve the stew over a grain:

This vegan stew can be prepared as gluten-fee with a few considerations. Use gluten-free plain flour (I use the Doves Farm brand whenever I use gluten-free flour in sauces or stews) for the stew, and ensure your vegan stock is gluten-free.

For the dumplings you could try preparing these with gluten-free self-raising flour, but I have not actually tested this out so I do not know what the outcome would be. Although I am planning on testing gluten-free dumplings and will update this question with the outcome when I do.

More Tasty Vegan Stews To Enjoy Throughout The Chilly Months: 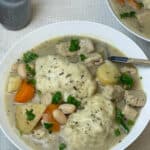