These vegan parkin biscuits or cookies have all the tasty flavours of traditional English parkin cake. Each cookie is packed with the festive flavours of rich ginger, cinnamon, oatmeal, and treacly syrup, and topped with a toasted nutty almond.

If you love the flavour of British oaty hobnob biscuits you'll love these wee gems with their crisp edges and softer chewy insides. Perfect for dunking in a hot cup of tea.

This recipe for parkin biscuits is all vegan with no butter, dairy milk, or eggs required. A few everyday pantry ingredients are all that is required.

Due to the cost-of-living crisis the cost of butter and eggs has sky-rocketed, so many more people are beginning to release that tasty bakes can be prepared more economically and better still with no animal ingredients.

What is a traditional parkin cake?

Parkin cake originates in Northern England most notably Yorkshire and Lancashire where the two regions have slight variations in the ingredients. A Yorkshire parkin contains black treacle and medium oatmeal, creating a drier biscuit-like cake whereas the Lancashire parkin features golden syrup and rolled oats.

In essence, parkin is a dense, rich type of gingerbread which although is at first drier than gingerbread, the parkin does becomes more moist and sticky as it ages, so the cake tends to be baked several days before it is needed.

Parkin cake is traditionally baked for Bonfire Night or Guy Fawkes Night on the 5th November. Although parkin is tasty at any time during the autumn and winter months, and if your a parkin fan then spring and summer are also good for some parkin enjoyment.

Mentions of parkin date back to the 1700s but the origins of the cake go way back to North England Medieval times where a Tharf cake, bread or biscuit was baked.

In the North of England oats was a cheaper grain to grow compared to wheat, and so when the oats were harvested at the beginning of November the Tharf cake or biscuit was baked.

Other names for the tharf cake was Thor cake or Tharve cake and the name is said to translate from Old English to mean unleavened or plain as the cake resembles a flat biscuit.

Historically, tharf cakes were also eaten during the Twelfth night or Twelve days after Christmas, and traditionally on the 1st November on All Saints Day or 2nd November, during All Souls Day.

In some English villages the first of November was also known as Caking Day and the males of the town would go from door to door asking for money so that they could purchase Tharf cakes!

There's nothing better or tastier than a few traditional parkin biscuits with a nice cup of strong brewed tea. One sugar lump or two?

As read above parkin biscuits originate from the classic British parkin cake. Parkin is similar to gingerbread cake, but with one major difference: parkin also contains oatmeal.

The best thing about parkin biscuits is that their flavour and texture deliciously develop as they sit in the biscuit tin, so are perfect for having around to treat and surprise those unexpected guests.

This vegan recipe for parkin biscuits is adapted from an old Be-Ro recipe that was found in the 18th edition of the Be-Ro vintage recipe booklet that was published in 1955. Be-Ro is a British flour company that was founded way back in 1875. Over the years, Be-Ro have produced many much loved Be-Ro recipe booklets filled with tasty sweet and savoury baking recipes as well as amassing a loyal fan of bakers.

For the vegan adaption more syrup was added in the form of black treacle, and more milk albeit soya milk, and the spices were upped from one teaspoon of ginger to two teaspoons, and a teaspoon of cinnamon was also included.

The original recipe did not contain baking powder or salt, but the vegan adaption does include baking powder to give the biscuits a little lift during baking and a wee pinch of salt to aid the baking powder do its magic.

Additionally the original recipe states to rub the margarine into the dried ingredients to create a breadcrumb like texture, however I melted the margarine and simply mixed it into the dry ingredients along with the treacle and milk, and this different method worked well.

These vegan parkin biscuits are simple to prepare, and the unbaked biscuit dough does not require pre-chilling before being baked for a quick 15 minutes.

I say quick, as it is, compared to a parkin cake that could take an hour or longer to bake.

Parkin biscuits are perfect for when you have a hankering for the flavours of traditional parkin cake but don't want to switch the oven on for so long, or just want a fast tasty vegan treat to enjoy with a cup of tea or coffee.

First, melt the margarine in a small saucepan and set aside.

Next, add the black treacle [or molasses or golden syrup] and soya milk [or your usual milk].

Pour the melted margarine into the mixing bowl and mix everything together until it comes together into a biscuit dough.

Scoop up heaped teaspoonfuls of biscuit dough and roll the dough into a smooth biscuit ball.

Gently press a whole or halved almond onto each biscuit dough ball.

Cool on a wire rack and enjoy!

Can the black treacle be replaced?

Yes, An easy swap for black treacle is molasses or golden syrup.

Can the almonds be omitted?

Yes of course, if preferred simply don't use the almonds.

What type of oatmeal is best for parkin biscuits?

The type of oatmeal that is best for parkin biscuits is known as Scottish oatmeal or medium oatmeal or baking oatmeal. This type of oatmeal has been stone ground into a finer, less coarse consistency oatmeal compared to pinhead or steel-cut oatmeal.

The oatmeal used for this recipe was Hamlyns Scottish Oatmeal which was purchased from the local Co-op supermarket [UK]. 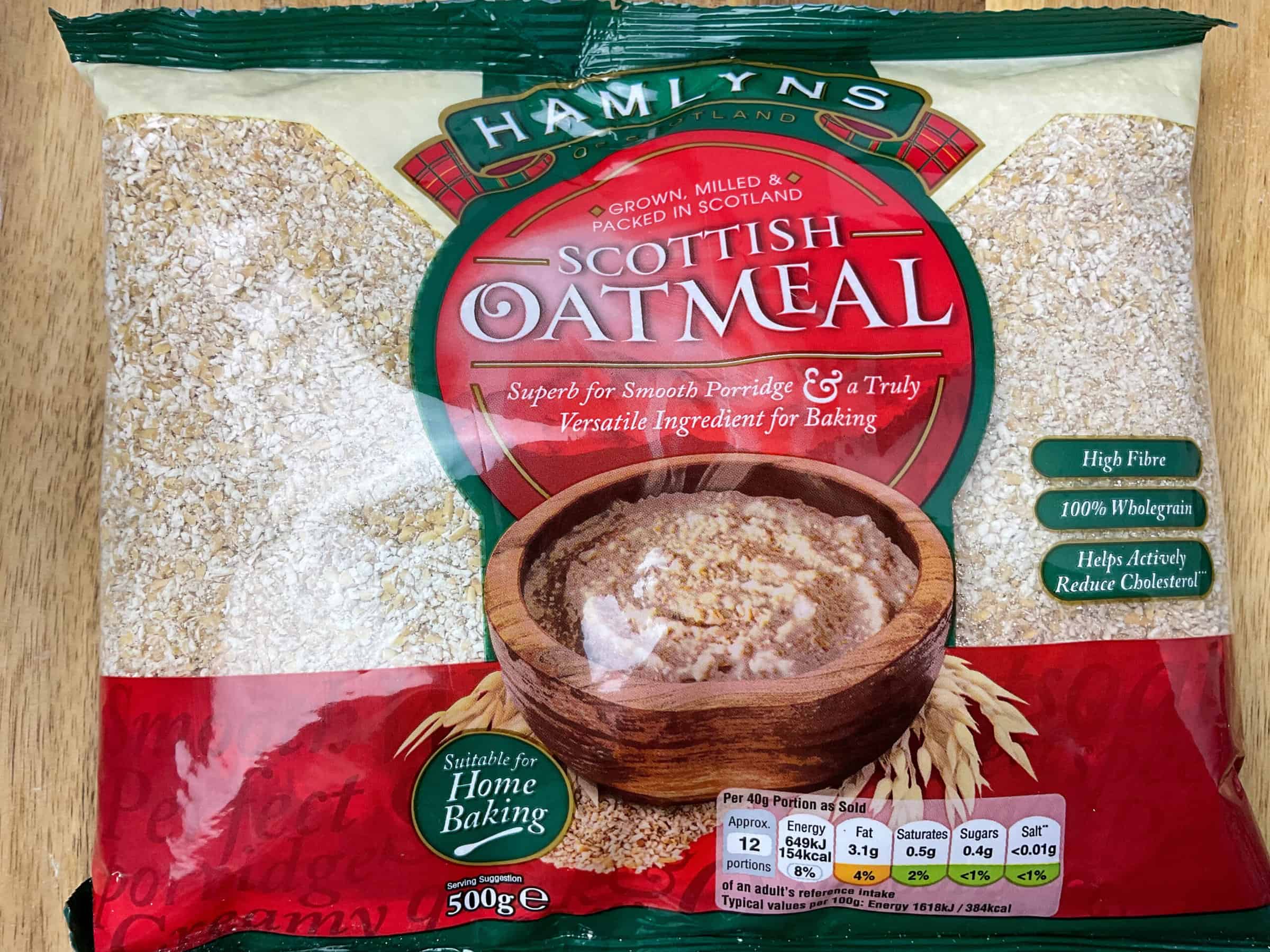 Can I replace medium oatmeal with a different type of oatmeal?

If you can't find medium or Scottish oatmeal, or an oatmeal which states on the packaging that it is suitable for baking, then simply use steel-cut or pinhead oatmeal. The texture of the biscuits will be slightly different but will still be tasty.

Alternatively, add the steel-cut oatmeal to a blender or grinder and pulse a few times to get a finer texture. Its important to know that although medium oatmeal may be ground, it is not the same as flour as the texture is still little bits of oatmeal.

More tasty vegan recipes to use up a bag of oatmeal

[perfect for breakfast, brunch, lunch, light dinner, snack, any day or time is perfect for a hot bowl of wholesome porridge]

Sage and onion meatloaf with chickpeas, green lentils and oatmeal

[ideal main for a vegan or plant-based Christmas dinner]

Serve tasty wholesome skirlie as a salad, soup or stew sprinkler/topper, or along with mashed potatoes, veggies and lots of gravy, or as a vegan stuffing for tasty veggies, the list is endless.

These vegan parkin biscuits have all the flavours of traditional parkin cake, they are rich with treacly syrup and oaty like a British hobnob biscuit, and perfectly spiced with ginger and cinnamon.

Each biscuit is crisp on the outside and softer on the insides but packed with delicious rustic textures of oatmeal. The flavours and textures will continue to tastily develop as they sit in the biscuit tin.

They are just so good. If you love parkin cake or gingerbread cake you'll love these tasty wee vegan biscuits which are perfect for the festive season. 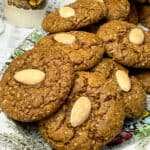 Do let us know how you got on by dropping us a comment below, and clicking the recipe star ratings above.