These old-fashioned British treacle buns are delicious little cakes that are ideal for enjoying along with a nice cup or tea, coffee or chilled glass of plant milk.

Treacle buns are packed with the flavours of rich treacle, ginger, cinnamon and sweet sultanas. Little teatime buns are a traditional British bake that have been enjoyed since at least the 1800s.

This treacle bun recipe is perfect for everyone especially vegan diets, and those requiring egg and dairy-free baking recipes.

What is an old-fashioned British bun?

An old-fashioned British sweet bun is a name given to little yeast-free cakes that were baked using a few basic ingredients, and have been enjoyed since at least the late 1800s.

Buns were a staple as they were inexpensive to prepare and could be flavoured or filled with anything to hand.

Some types of bun were similar to British fairy cakes such as the wartime era chocolate buns and baked within a cupcake tray, or free-standing similar to the British rock cakes.

Another type of teatime bun is the old-school raspberry bun which has a similar texture to a British scone or rock cake, but with a more spread out and flatter appearance. Raspberry buns are filled with fruit jam, lemon curd or marmalade.

The texture of a sweet bun can be either soft like a fairy or cupcake, or crumbly similar to a rock cake or scone, or cake-like and denser like a sweet muffin or fruit loaf cake.

It can get a tad confusing as a British sweet bun can refer to lots of different bakes, but what they all have in common is that they are little delicious teatime treats that are simple and quick to prepare, and can be baked successfully by anyone.

Treacle buns, as well as other teatime buns, traditionally contain eggs but as with similar older recipes, teatime buns would have likely to have been baked with home-made yeast.

However when baking powder was available to purchase in 1843 it revolutionised home baking as baking powder allowed bakes to rise quickly and conveniently compared with home-made yeast or requiring lots of expensive eggs.

As a result baking became so much more accessible and was less time consuming.

Vegan treacle buns do not require eggs instead baking powder is more than enough to create deliciously moist, risen and light sweet buns.

If you give this old-fashioned treacle bun recipe a go then do pop back and let us know how you got on. We love bringing to life old vintage recipes and especially love reading your comments.

How to prepare old-fashioned treacle buns

If you can't source black treacle then it can be replaced with golden syrup or light molasses.

First sieve the plain flour and baking powder into a mixing bowl.

Stir through the salt, ginger and cinnamon powders.

Add the plant milk to a separate jug or small bowl, and whisk through the black treacle with a fork.

Break the margarine into small pieces and drop it into the flour mixture.

Using your fingertips rub the margarine into the flour mixture until it resembles fine breadcrumbs.

Stir through the sultanas and sugar.

Pour in the milk-treacle liquid and stir to combine.

Cool within the muffin tray for a few minutes before removing to cool completely on a wire rack or similar.

Treacle buns can be placed into a cake/bread tin or covered container, or placed into a bread or food bag. Store for up to 4 days.

Older treacle buns can be refreshed within a warm oven for a few minutes to warm through.

Treacle buns can be frozen for up to 3-4 months. Treacle buns cope really well with being frozen and they defrost really quickly.

Its a great idea to bake a batch especially for the freezer, and pull one or two out whenever you require.

Can I substitute any of the ingredients for treacle buns?

* Black treacle can be subbed for golden syrup or light molasses.

* Sultanas can be replaced with raisins or currants, or a dried fruit mix [such as those used for Christmas cakes and puddings]

Do treacle buns need a frosting?

No frosting, icing or toppings are required for treacle buns as they are packed with tasty flavours. Without a frosting they can be easily popped into a lunch box or wrapped for a snack on-the-go.

However, if preferred a vegan cream cheese topping can be added, such as the frosting over on our pumpkin spiced fruit cake recipe [scroll down for the method within the recipe notes] or this simple water icing over on our old-fashioned gingerbread recipe.

Can I prepare treacle buns as gluten-free?

For gluten-free treacle buns replace the plain/all-purpose flour with a plain gluten-free flour blend [such as Doves Farm Freee], include ¼ teaspoon of xanthum gum and use a gluten-free baking powder.

An additional tablespoon or so of plant milk may be required as gluten-free flour tends to be more thirstier than wheat flour, and gf baked products do tend to dry out more quickly.

*** Please note: We have not tested these treacle buns as gluten-free yet but are planning on doing so, and will update this question when we have. Thanks! ***

What is black treacle?

Black treacle is a byproduct of the sugar cane refining process. Treacle is produced from the syrup that remains after the sugar has been refined. Treacle is a thick dark syrup with bitter, rich, sweet caramel notes.

Black treacle can be found in most UK supermarkets and grocery stores within the bakery aisle and is usually shelved beside golden syrup.

If black treacle is difficult to source then light molasses or golden syrup can be used instead.

These little old-fashioned British treacle buns are light and moist, with the textures and flavours similar to tasty gingerbread and fruit cake.

Got some treacle to use up?

The following recipes are some of the tastiest bakes out there, as they are instant family favourites and have a long history of yumminess!

Old-Fashioned Cornbread Muffins [these are prepared with sugar but this can be replaced with molasses or black treacle for a more richer traditional appearance, texture and flavour] 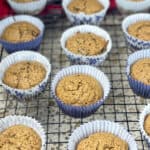 Prepared a batch of these tasty treacle buns?

Do leave us a comment below and let us know how you got on.

So we can admire your good baking!