Vegan Chinese 'chicken' jackfruit and sweetcorn soup is so delicious, easy and quick to prepare.

Perfect for a light lunch or a starter soup for a larger Chinese themed meal at home or a take-out at home fake-way.

Tasty pieces of jackfruit, sweetcorn, fresh bean sprouts, Chinese five spice and veggie stock is all that is required to prepare this flavour packed broth.

Garnish with spring onions and a drizzle of sesame oil and soy sauce. So good!

Chinese chicken and sweetcorn soup is a popular Chinese takeaway or restaurant soup.

This broth is also known as egg drop soup as an egg is whisked and mixed through the soup before serving.

This type of soup was developed by Chinese immigrants in American-Chinese restaurants and with the traditional soup amended to suit Western palates.

This veggie adapted soup replaces the chicken with jackfruit. Jackfruit is perfect for this soup as it provides the correct texture whilst soaking up the delicious Chinese 5 spice, veggie stock, and fresh sweetcorn flavours.

For the veggie stock I use 2 meat free chicken OXO cubes that I sourced in Asda (UK) but any vegan chicken stock or regular vegetable stock is perfect.

I also used corn kernels that I removed from fresh corncobs as I managed to source some at the reduced section of the supermarket! However canned or frozen sweetcorn is just fine for this recipe.

The mung bean sprouts replace the egg that is traditionally dropped into the broth and stirred around to create strips of egg. The bean sprouts add delicious fresh nutty flavours and crunchy pleasing textures.

Before serving, Chinese chicken and corn soup is generally thickened up with a cornflour/starch slurry which is basically an equal mix of cornflour and water.

To finish this veggie adapted Chinese soup a cornflour mix is poured into the broth along with the beansprouts and simmered for a few minutes.

That's all there is to preparing this really easy Chinese soup recipe!

It's that easy and quick but the flavours are so good especially when each served portion has a few extra bean sprouts scattered over, along with a spring onion garnish, and finished off with a drizzle of sesame oil and soy sauce.

If you prepare this recipe do pop back and let us know how you got on as we love receiving comments and feedback.

How To Prepare Vegan Chinese Jackfruit And Sweetcorn Soup

How do I store leftover Chinese jackfruit and sweetcorn soup?

Leftover soup can be stored within a covered container and placed in the refrigerator for up to 3 days.

Can I freeze this veggie soup?

This soup can be frozen within a freezer and food safe container for up to 4 months.

Although do keep in mind that some of the textures may change slightly such as the bean sprouts.

What can I serve with jackfruit and sweetcorn soup?

This Chinese corn soup can be served as a starter on its own before a larger meal.

For a lighter lunch or dinner try also serving:

* cooked rice at the bottom of each bowl

This veggie soup can be easily prepared as gluten-free.

Simply ensure that your vegetable stock, soy sauce and Chinese 5 spice powder is free from gluten.

Tamari soy sauce is usually gluten-free as opposed to regular soy sauce which tends to be prepared with wheat.

Do I have to use cornflour for this veggie Chinese 'chicken' and corn soup?

If preferred just leave the cornflour out of the soup. The soup will be thinner but the delicious flavours will remain the same. 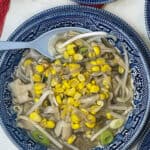