Serve with a chunk of crusty bread or keep it authentic with some traditional Scottish Oatcakes.

This soup is considered Scotland's national soup and has been around since the 16th Century. Barley is a traditional ingredient but for gluten-free soups replace with rice.

Planning a vegan or plant-based Robert Burns Night (25th January) themed supper? a A bowl of this delicious soup is perfect for starters. So good!

Cock-a-leekie soup originates all the way back to 16th century Scotland.

Although it is claimed that cock-a-leekie soup can be traced to French origins. When the French recipe for chicken and onion soup found its way over to Scotland, the Scots decided leeks were a better choice to replace the onion.

Traditionally Cock-a-leekie soup would be prepared with an old cockerel which would be deemed perfect for soup as it would need lots of simmering to tenderize.

Classic recipes for this soup often make use of economical barley, rice, or oatmeal as a means to thicken the broth. And surprisingly chopped prunes, added to each bowl or to the soup pot are a popular addition that provide sweetness and interesting texture.

Other parts of Britain have their own versions of cock-a-leekie soup including Wales and the West Country (south-western England).

Tofu chunks replace the chicken and as a result evolves the name to tofu-a-leekie.

If your not too keen on tofu that's not a problem. Any vegan meat-free chunks can be subbed. Quorn vegan pieces are especially tasty and add lots of flavour to the broth.

Alternatively a can of white creamy beans are also delicious with this soup. Cannellini, haricot, white kidney beans or butter beans are good choices.

To thicken the broth this recipe uses pearl barley. Being Scottish I grew up eating this grain and so I love adding it to recipes. Although if you like the barley can be subbed out for ¼ cup (40-50 grams) of pinhead oatmeal/steel-cut oatmeal or about ½ cup (100 grams) of rice.

However, if you require a gluten-free soup then forego the barley or oatmeal. Barley is not considered gluten-free even though it is low in gluten. And oatmeal, unless certified gluten-free, is often prepared in a factory along with gluten ingredients so may not be safe for gluten-free meals.

Tofu-a-leekie soup is pleasantly flavoured with dried herbs, bay leaves and a chicken flavoured vegan stock. The result is a satisfying delicious broth perfect to dunk a chunky piece of crusty bread of oatcake.

To finish sliced green/spring onions are scattered across each serving, and a few optional teaspoons of nutritional yeast flakes adds extra flavour dimensions and savouriness. So yummy.

How To Prepare Vegan Cock-a-leekie Soup

How do I store leftover cock-a-leekie soup?

Leftovers can be stored, within a covered container, in the fridge for 3 days. Or frozen for 4-6 months within a freezer safe container.

How do I reheat leftover soup?

Leftovers can be reheated by bringing to a simmer and heating for 3-4 minutes until piping hot. Extra veggie stock will likely need to be added as the barley will continue to soak up the liquid.

If the soup has been frozen, defrost completely before reheating.

Yes. It is easy to prepare this soup free from gluten ingredients. Simply ensure that your vegan stock is certified gluten-free.

Barley is not considered gluten-free so sub this grain for rice or a different gluten-free grain.

What can I serve with vegan cock-a-leekie soup?

* your favourite cracker, such as vegan friendly saltines, rice cakes

* scatter some tasty traditional Scottish Skirlie over the top of the vegan tofu-a-leekie soup for an even more authentic bowl of yumminess.

Can I use any substitutions?

As with any recipe it can be adapted to suit your family's needs or contents of your fridge and pantry.

* the tofu can be replaced with vegan meat-free pieces, such as Quorn/soya chunks, soya curls. Or white beans such as cannellini, haricot, butter or white kidney beans.

* replace the pearl barley with any variety of rice, wheat grain, rye grain, quinoa, pinhead/steel-cut oatmeal. Cooking times may need adjusting depending on the grain. Leftover cooked grains are perfect as these just need adding for last 5 minutes of cooking to heat through.

* instead of spring/green onions use chopped parsley, chives or dill

* replace the onion with dried onion, about 2-3 teaspoons

* replace the dried herbs with sprigs or a small bunch of fresh herbs, such as thyme, sage or rosemary. Or a mix.

Can I add anything extra to cock-a-leekie soup?

* diced prunes are a traditional addition, try adding a few chopped prunes to each serving but only if liked!

* a swirl of vegan cream to serve 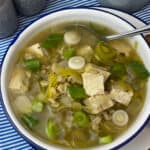