There is nothing more satisfying, delicious and humble that a pot of homemade baked beans in a flavour packed tomato sauce bubbling away on the stove.

This homemade baked beans in tomato sauce recipe is super quick and easy. A pot of wholesome homemade beans can be ready in less than an hour and can happily stew on the stove-top while you prepare the rest of the meal.

Scoop the baked beans on to a slice of toasted bread or a baked potato. Or enjoy with a few veggie sausages and mashed potatoes.

Baked beans are normally prepared with haricot beans (navy beans) and cooked within a tomato sauce.

Cans of baked beans in tomato sauce are a popular British favourite convenience food. Most homes have at least one can of beans lurking in their food cupboards!

Heinz baked beans in tomato sauce are the most popular brand of baked beans in the UK. Although tins of Branston baked beans are just as loved and many supermarket own brand and value brands can be equally tasty.

Over in the US baked beans in a tomato sauce are less common. In the US haricot beans are termed navy beans and are available to buy in cans labelled baked beans but are more popularly seasoned with hickory smoke, brown sugar, honey or maple syrup, and commonly have bacon bits or pork added.

As a result New England or Boston baked beans became very popular and featured in many old New England cookbooks during the following centuries. Many old baked bean recipes featured brown sugar but molasses soon replaced the brown sugar when the British sugar tax on the colonies became too high.

Cans of baked beans were first sold in Pittsburgh, US in 1895. A few years later baked beans were imported over to Britain but remained too expensive for ordinary family's to be able to afford as a staple.

However by the 1930s, due to British factories beginning to mass produce baked beans, baked beans were on route to becoming a much loved household British staple. However, for the British market, pork and bacon were omitted from the cans of baked beans with tomato sauce being cooked with the beans instead.

This recipe for vegan plant-based baked beans does not contain any pork or bacon nor is any meat alternative necessary.

The recipe is similar to Boston Baked Beans or New England Baked Beans as black-strap molasses can be used to provide depth of flavour and sweetness.

Although black treacle can also be used instead of molasses and the end result for both of these ingredients is just the same as I have prepared this recipe with both. Soft brown or light brown sugar is also added and this compliments the treacle or molasses providing deeper savoury caramel notes.

Tomato passata is used for the sauce, but of course canned chopped tomatoes can be added instead. Tomato passata is a popular ingredient in the UK although it may be known as sieved, pureed, uncooked tomato sauce in other countries.

Tomato passata or sieved/blended tomatoes is perfect for baked beans as it provides the smoothest, velvety tomato sauce texture.

I know that it is simple and easy to just open a can of baked beans bought from the supermarket or store but really cooking your own is a lot more indulgent especially if serving for a special meal.

Also homemade beans are much more easily adapted to suit your dietary needs, such as low salt or sugar, as well as flavour preferences. Homecooked baked beans are so worth the extra thought and time.

If you prepare this plant-based baked bean recipe do let us know how you got on.

We love reading all feedback and comments.

Thanks so much. Jacq x.

How To Prepare Vegan Homemade Baked Beans In Tomato Sauce

How do I store homemade baked beans?

Can I freeze homemade baked beans?

Add the cooled baked beans to a freezer and food safe container and freeze for up to 3 months.

How do I reheat baked beans?

It's just a matter of scooping the beans and sauce into a non-stick pan and reheating until piping hot.

Reheating in a microwave can be even quicker.

Can I use a different bean for baked beans?

Any bean or a mix of beans can be substitute the haricot beans for this homemade baked bean recipe.

Cans of mixed baked beans in tomato sauce are available in most supermarkets.

Do baked beans need to be baked in the oven?

Modern homemade baked beans tend to be stewed on the stove-top within the sauce or flavourings.

The baked part refers to the old-fashioned method of baking beans from raw in the oven. Once beans are soaked in water, they are drained, and added to an oven-proof pot along with water and flavourings.

A lid is added to the pot and placed in the oven for a few hours until the beans are cooked and the sauce is thick.

Tomato sauce does not appear to be a classic US addition rather the tomato sauce is an adaptation that the British added to baked beans.

Mass produced cans of baked beans in tomato sauce are not actually baked either rather they are added raw and blanched to the can along with the blended tomato sauce.

The beans and tomato sauce are then steamed and cooked within the actual can.

What can I serve with baked beans in tomato sauce?

A slice of toasted or grilled bread is all that is required for a tasty simple lunch, with perhaps a sprinkle of nutritional yeast flakes over the beans before serving.

* mashed potatoes or mashed mixed root veggies such as this old-fashioned champ recipe that features a mash of potatoes, turnip (swede/rutabaga) and cabbage

* as part of a vegan cooked breakfast

* a side dish for a BBQ or cook-out

* baked beans can also be enjoyed chilled from the refrigerator as a tasty quick snack. Many people love to eat cold baked beans straight from the can.

Can I substitute any of the ingredients for baked beans?

* use chopped fresh onion instead of dried (I have tried both dried and fresh, both were equally tasty but dried onion was much more convenient!)

* use fresh diced garlic instead of dried

* sub out black treacle for molasses or date syrup

* instead of soft brown sugar use coconut or date sugar, or your regular sweetener

Are these homemade vegan baked beans suitable for gluten-free?

Yes with a few considerations baked beans are perfect for gluten-free diets.

Tamari soya sauce is generally free from gluten as opposed to regular soya sauce which is prepared with wheat.

Lastly, if adding the optional liquid smoke then check the ingredients for gluten. 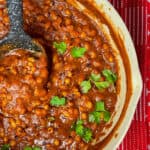