This recipe for vegan Irish stew results in a delicious plant-based bowl of stew that is so comforting, warming, and sustaining.

Irish stew is the perfect family meal especially when served with a wedge of wholesome Irish soda bread to dunk in the rich, savoury gravy, there is just nothing better.

Potatoes, carrots, and soya chunks, or an alternative, are stewed in a deeply savoury gravy flavoured with onions, garlic, bay, soya sauce and thyme.

This is an inexpensive meal, utilises everyday ingredients, and is quick to prepare. What's not to love?

The Origins Of Traditional Irish Stew

Irish Stew as the name suggests originates from Ireland and is one of their national meals. However, in today's globalized world Irish stew is enjoyed widely.

Traditionally, Irish Stew is simply prepared by stewing mutton or lamb with potatoes, with the odd carrot or two thrown in if available. Irish stew like many cultural dishes has evolved throughout time and place, with each family and generation adding different ingredients.

Many people claim that for Irish stew to be authentic then just meat, potatoes, onions and water are required. Whereas others have over the years added ingredients such as swede, carrot, barley, garlic and various herbs. Potatoes were added to the stew when they were introduced to Ireland during the 16th Century.

Since the 16th Century, the potato has been Ireland's most popular food staple. Sir Walter Raleigh (1552-1618) returned from exploring the Americas brining with him the first potatoes. It is believed Raleigh was the first to plant potatoes in his home garden in Cork, Ireland.

Combining mutton and potatoes made for an economical and filling dish which sustained many poorer families for centuries. However, a shortage of potatoes was disastrous for the Irish population during the 1845-1849 potato famine.

Nowadays, Irish stew can be purchased prepared in a can/tin, pre-packaged ready-meal and is a popular item on restaurants, café and pub menus up and down the UK, but especially in Ireland and Northern Ireland.

Better still is to make this easy and quick stew at home, and prepare it with all-plant vegan ingredients.

My family lived in Northern Ireland for some time, and two of my kids were born in Ireland, so we love Irish Stew especially with a hunk of rustic vegan Irish soda bread. Now we are back in Scotland, I make soda bread at home as I find the ones available in the supermarket just don't hit the authentic Irish taste.

This vegan Irish stew recipe subs out the meat and utilises dried soya chunks. Dried soya chunks are otherwise known as textured vegetable protein (TVP) that is usually made from one ingredient: defatted soya flour.

Soya chunks are not the most appealing looking ingredient. But seriously, they actually taste good if prepared properly as the chunks soak up any liquid or sauce flavour that you add to the dish.

Many UK supermarkets stock TVP, as well as most health/wholefood stores. If you are in the US and can't source soya chunks then the best equivalent is soya curls.

TVP chunks pack a protein punch as a 100 grams of dry TVP adds 51.1 grams of protein to your dish! So TVP is perfect for vegans looking for high protein plant-based food.

Alternatively substitute the TVP for sliced tempeh or seitan, or any meat-free chunks or pieces. Chopped mushrooms would make an excellent wholefood replacement.

How To Prepare Vegan Irish Stew

How do I store and reheat leftover stew?

Leftover stew tastes so much better the next day as the flavours continue to develop as it sits in the fridge.

Reheat leftovers by placing in a saucepan and gently bring to a simmer for 2-3 minutes until piping hot. Defrost before reheating. Add extra veggie stock if necessary to avoid sticking to pan.

Can I batch prep Irish stew?

Vegan Irish stew is perfect for batch prepping so if you have a large soup-pan and the freezer space, it makes sense to prepare a double batch. Freeze portions for a quick future meal.

What can I serve with Irish Stew?

For an authentic experience enjoy Irish stew with a chunk of rustic Irish soda bread.


Can I substitute any of the ingredients?


Yes but the flavours of the stew will be different and the overall dish may not resemble Irish stew. But the stew will still be pretty delicious.

*use sweet potatoes or butternut squash instead of white potatoes

*replace the carrot with turnip/swede/parsnips/celeriac

*use leeks or shallots instead of onions

*add dried garlic and/or dried onion instead of fresh, a few teaspoons of each

*instead of adding marmite, tamari, vegan Worcester sauce to flavour the gravy add a few tablespoons of vegan gravy powder near the end of stewing to flavour and thicken up the stock

*instead of dried thyme use mixed dried herbs

*use regular soya sauce instead of tamari soya sauce

Yes. Irish stew can be easily made gluten-free. Simply check that your vegan stock and flavourings are certified gluten-free. And choose gluten-free meat-free pieces/chunks. 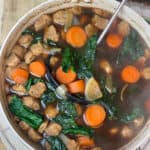