This vegan recipe for traditional Scottish potato and leek soup with toasted oats is super easy and quick to prepare yet packed with wholesome nutrition and deliciousness.

Perfect for lunch, dinner, supper or even a snack, a bowl of leek and potato soup is guaranteed to warm the family up on chilly days and fill hungry tummies! All whilst being amazingly budget-friendly.

Since leeks appeared on the British Isles sometime before the middle ages, they have become a very important food crop. Wales even has the leek as part of their National emblem along with the daffodil. In Ireland leeks are a prominent ingredient within some of their traditional dishes including Irish leek and oatmeal broth (vegan recipe), as well as featuring within some of the Irish legends.

In Scotland leeks as a crop are ideal as they are hardy and can cope well with the variant weather and poorer soils. As such leeks feature in many traditional Scottish meals including Scotland’s national soup cock-a-leekie, which is a chicken broth with leeks. Oats and barley, also popular Scottish crops, have been enriching Scottish broths for centuries and marry up with leeks beautifully.

Over in the US Vichyssoise is a tasty leek and potato soup that is usually blended and served chilled. It is popularly claimed that Vichyssoise soup was developed by a French chef working in the New York Ritz restaurant in the 1950s who was looking for a refreshing dish to cool his customers during the hotter months.

Although leeks go even further back as recipes containing leeks were discovered in the ancient Roman cook book Apicius. And there is evidence that leeks may have originated in Egypt, and were so highly regarded as to be used as a type of money to pay for other items.

Preparing this vegan Scottish potato and leek soup is really easy. First the sliced leeks, onions, garlic, cubed potatoes and carrots are sautéed for 15 minutes using either a tablespoon of olive oil or half a cup of veggie stock.

Next the pearl barley is mixed through before the veggie stock is poured in the pot. A sprinkle of salt and pepper is also mixed through, and everything is brought to a simmer for 35 minutes.

After 35 minutes rolled oats are tipped into the soup and cooked for a further 5 minutes. Now all that needs doing is for the plant milk to be poured into the soup, mixed well, brought up to a gentle simmer and heated for just a few minutes.

That’s it for the soup, it will be good to go after the seasoning is checked.

Whilst the soup is gently bubbling, preferably before the oats and milk are added near the end of cooking, the rolled oats for the toasted oats can be added to a small pan. A pinch of salt and pepper is mixed through the oats and heated until the oat mix is very hot. The oats may start to sound like they are going to pop.

The oats are shook and stirred often to prevent burning, and once they start to brown the pan can be removed from the heat. Continue to shake the oats and stir to ensure that they continue to toast and take on golden hues. The toasted oats don’t need to be served hot and can just sit in the pan or a little dish until the soup is ready.

How To Prepare Scottish Potato And Leek Soup With Toasted Oats

How do I store leftover vegan Scottish potato and leek soup?

Leftovers can be stored for up to 3 days, within a covered container in the fridge.

Or frozen for up to 3 months.

The texture and look may change slightly with being frozen especially as there is plant milk within the soup but it won’t affect the taste.

How do I reheat leftover potato and leek soup?

Place the leftover soup in a saucepan or suitable pot, and gently bring to a simmer. Heat for 2-3 minutes being careful not to fast boil as then the plant milk may split. Although if it does just mix well, the flavours are still great.

What can I serve with vegan potato and leek soup?

This soup is a filling, satisfying, hearty soup so is suitable for a main meal along with:

With a few considerations, yes. 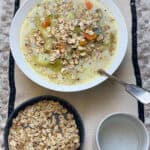 Mix through soup near end of cooking:

Toast the rolled oats while the soup simmers:

Time for a vegan traditional tasty pudding or sweet snack…

We would love to know how you got one. Pop a comment below, all feedback very welcome.

I’m Jacq and a warm welcome to my Scottish family recipe blog. These recipes are for everyone who loves traditional food but need easy, tasty, wholesome all-plant ingredient versions. Have a look around and find out what’s for tea tonight. X