Vegan traditional Scotch broth is the soup you need during those chilly fall and winter months.

A bowl is so warming, comforting and nourishing. And amazingly budget-friendly, which is a must and winner in my family household. Not to mention low in calories and fat so a wedge of crusty bread can be guiltlessly employed to mop up all those scrummy soup juices.

Enjoy a bowl of Scotch broth as a New Years day dinner starter, a Hogmanay warmer before going out first-footing, as part of a Robert Burns night supper (25th January) or to celebrate St Andrews feast day on the 30th November.

This veggie packed soup can be easily adapted and prepared as gluten-free.

The earliest recorded recipe for Scotch broth dates back to an English cookbook from the early 1800s. Slow cooked mutton or lamb is the main traditional component of Scotch broth, along with split peas and barley, and various root vegetables. Although some old recipes also add red onion and peppers.

Of course Scotch broth in many variations would have been popular long before the recipe was included in a cookbook, with different family recipes being passed through the generations. Each recipe will likely include their own interpretations and not be exactly the same.

Scotch broth was a popular mainstay food of my Scottish childhood. And still is, although I now prepare a delicious plant-based version for my family. The main ingredient that I recall from my childhood Scotch broth is dried broth mix.

Cans of ready-prepared Scotch broth are usually found in most UK supermarkets and grocery shops, and is a popular menu staple in many Scottish cafes, restaurants and pub or Inn menus.

Many Scots include Scotch broth as part of their Robert Burns night supper (January 25th), a Hogmanay warmer before going out first-footing, or as a New Year Day dinner starter.

To prepare plant-based Scotch broth couldn't be simpler, although a little preparation is required.

The soup or broth mix is soaked overnight or at least for a few hours. Usually it states on the broth mix package that soaking is not required and the mix can be added directly to soup.

However, with lots of experience I have learned that split-peas can be notoriously difficult to soften up especially if the peas are a little on the old side. Which is why I prefer to soak, just to cut down the length of time required to cook the soup.

A teaspoon of bicarbonate of soda added to the soaking water can help soften up older pulses.

If you haven't come across vegetable broth mix before it is an ingredient commonly sourced in most UK supermarkets and small grocery stores, and is made up of a dried mix of barley, split peas, and red split lentils.

Some variations also include dehydrated vegetables or dried wheat/barley/oat flakes. Any variety can be used for this recipe and I have included information within the recipe notes on how to prepare your own simple broth mix at home.

After the broth mix has been soaked, it is added to a soup pan along with the extra red lentils and barley. The vegan stock is poured in and brought to the boil while the veggies are prepared. A bay leaf is chucked into the heating stock.

The veggies for Scotch broth are usually diced, so as each veggie is diced it is added to the soup pan. However, the cabbage is not added at the beginning of cooking but left until near the end.

Once the veggies and pulse are brought to the boil, the heat is reduced, and the soup is left to simmer for 40 minutes. Any foamy-scum that arises to the top of the soup is carefully skimmed off. This is just residue from the pulse and will not affect the soup as long as most of it is removed.

After 40 minutes the cabbage is added and the broth simmered for another 10-15 minutes. Finally the seasoning is tasted and enough salt and pepper is sprinkled in to bring all the flavours together into a delicious, satisfying soup.

Its that easy and all that is left to do is add a little chopped parsley to each bowl served. Of course this can be omitted or replaced with your preferred fresh herb such as chives or dill.

How do I store leftover vegan Scotch broth soup?

Leftover soup can be stored in the fridge, covered, for up to 3 days.

Or frozen in a freezer-proof container for up to 4-6 months.

How do I reheat leftover Scotch broth?

Leftover Scotch broth can be reheated by adding to a pan and bringing to a simmer.

Boil for 3-5 minutes until piping hot throughout, stir frequently to prevent sticking to pan.

Extra veggie stock may need to be added as the pulses will continue to soak up liquid as the soup sits in the fridge.

* swede can be switched out for turnip, sweet potato, parsnip or celeriac

* celery can be subbed for one medium leek

* any of the pulses or broth mix can be replaced with any combination of barley, red lentils, green split-peas, and yellow split peas. Omit any of these that you don't like or can't source, and just stick to the same combined weight stated within the recipe: 280 grams/ or about 10 oz.

With a few adaptations it is easy to prepare this Scotch broth as gluten-free.

Firstly, as barley contains gluten this ingredient needs to be omitted.

Just adjust the cooking times for the Scotch broth to ensure your chosen grain has enough time to cook within the broth.

Lastly, ensure that your vegan stock is free from gluten. The vegetable stock or bouillon powder that I often use is gluten-free and I have added a link to it within the recipe ingredient list.

What can I serve with Scotch broth?

What is dried broth or soup mix?

Dried broth or soup mix is a a common British ingredient that can be purchased in mostly all UK supermarkets, independent grocery stores, and wholefood/health shops.

Broth mix is usually made up with pearl barley, red split lentils, yellow and green split peas. Green lentils are found in some preparations.

Often some varieties contain a mix of dehydrated veggies such as onion, swede, leek and carrot. And others also include dried flaked grains such as wheat, rye, or oats.

Broth mix is generally really inexpensive so a great ingredient to purchase for budget-friendly wholesome soups and stews.

However, it is easy to prepare your own at home. Simply mix equal amounts of each pulse and store in a glass jar or other airtight food storage container. Grain flakes can be added along with any dehydrated veggies.

Other grains that could be added include wheat berries/grains, rye grains, millet, teff, or buckwheat.

Once you've prepared your soup mix it will last ages in your pantry as long as it is kept in a dry area away from bright sunshine.

The broth mix can be added to any soups or stews and is a useful way to add nutrition and texture. As well as a good stock thickener especially if oat flakes are included. 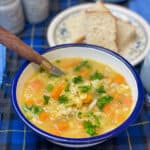 Pre-soak the dried broth/soup mix in cold water the night before its required.