This slow cooker vegan pea and 'ham' soup recipe is packed with surprisingly savoury flavours and aromas reminiscent of an old-fashioned pea and ham soup that is served in many cafes across Scotland and Britain, as well as being a traditional firm family favourite.

No special expensive ingredients are required to prepare this easy slow cooker vegan pea and 'ham' soup, instead just a few everyday veggie pantry ingredients 'green split peas, bicarbonate of soda, red split lentils, carrots, onion, garlic, bay leaf, salt and pepper, veggie stock, and a little sugar and oil. Oh and a few strips of optional vegan bacon but that's totally optional as the soup is incredibly flavourful on its own.

The vegan bacon for this vegan pea and 'ham' soup is optional as the soup is deliciously savoury and packed with pea and ham flavours without any more additions. However, the veggie bacon does add extra texture and interest and a little bit goes a long way. We used half a packet of This Isn't Bacon Rashers [120grams].

This Isn't Bacon Rashers isn't labelled gluten-free but it does not contain any gluten-ingredients. Rather the company claims that they can not label it gluten-free as it is produced in a factory where other gluten ingredients are handled.

Origin of pea and ham soup

Pea soup in some shape or form has been around for thousands of years with many cultures having their own traditional version.

In Britain, one traditional pea and ham soup was historically more commonly known as London Particular. This odd named soup is prepared with yellow or green split peas, bacon or ham hock, and possibly a few veggies such as carrots, celery, and onion.

The unusual name London Particular was given to the soup during the Victorian era [1837-1901] when London experienced such intense thick fogs due to the rise of factories causing air pollution. The thick London particular fog were also known as a pea soup fog, and a peasouper fog as it resembled the thick yellowish pea and ham soup!

Charles Dickens, the Victorian author of the novel Bleak House refers to the overpowering London particular fogs and the resemblance to the pea soup on offer within his book!

Thankfully, London does not currently experience fogs of that calibre anymore! Also there are now tasty vegan pea and 'ham' soup recipes available that may resemble the colour and thickness of a crazy fog but are particularly incredibly tasty!

For more information about the origins of pea soup check out our old-fashioned pea soup recipe.

Vegan pea and 'ham' soup obviously does not contain any ham, bacon, or other types of meat. Instead it is plant ingredients that provide the meaty, savoury flavours. Surprisingly, plants can do a wonderful job at replicating deep umami flavours.

Diced carrots are added for sweetness as well as for their resemblance to little pieces of ham. Although I do like to offer my family a slice of cooked vegan bacon as a garnish, but it is not really necessary as the flavours of the pea soup is perfect on its own.

For extra texture and interest the vegan bacon can also be sliced and stirred through the finished soup.

The aromas of this vegan pea and 'ham' soup cooking away in the slow cooker will have you impatient for lunch or dinner, and will transport you to a wee cozy warm cafe feel. A chunk of crusty bread for dunking in the soup equals the perfect easy vegan lunch.

How to prepare slow cooker vegan pea and 'ham' soup

This vegan pea and 'ham' soup is a new family favourite and has to be tasted to be believed as its so utterly delicious. Prepare this soup for your meat-eater friends and family, they may even suspect that you used real ham!

First, cook the onions and garlic for 5 minutes.

Add the pre-cooked onions to the slow cooker.

Give it all a good stir.

Pour in the hot vegetable stock.

Switch the slow cooker to the high setting and cook for 4 ½-5 hours.

Optional: Serve with slices of cooked vegan bacon or chop the bacon into pieces and stir through the cooked soup. A drizzle of vegan pouring cream is a nice addition.

Vegan pea and 'ham' soup will keep fresh for 3 days, within a covered container, and stored in the refrigerator. Or freeze for 3-4 months.

This pea soup will thicken as it sits but will thin out as it reheats. To stretch the leftover soup into more portions stir through a little plant milk before reheating.

Reheat on the stove-top until piping hot, or use a microwave. Alternatively, pour the soup back into the slow cooker, set the heat to high and leave until piping hot throughout.

Can I use yellow split peas for pea soup?

Yes. If you have yellow split peas at home instead of green split peas then go ahead and use the yellow peas.

Is vegan pea and 'ham' soup suitable for a gluten-free diet?

Absolutely. Happily peas are gluten-free, but do use a gluten-free vegetable stock or broth. Bicarbonate of soda is naturally gluten-free so is safe to use. The other ingredient that needs consideration is the vegan bacon, if using, so do check the ingredients.

For a traditional British side dish check out our traditional mushy peas recipe and this tasty British broad bean and pea rice pilaf.

Dried peas are incredibly budget-friendly, store well in the food cupboard, yet are little powerhouses of plant-based nutrition providing us with tons of slow-release energy, protein, fibre, vitamins, minerals and antioxidants.

So its worth adding peas to your diet whenever possible, which is what I am currently doing for my family during the cost of living crisis, hence all the new pea recipes!

Send us your recipe requests!

Would you like to see a vegan version of a particular meal, bake, or food? Do let us know and I will aim to recreate it within my Scottish family kitchen. We love trying new dishes so will love the challenge! Pop us a comment below with any requests. Thanks so much, Jacq, x 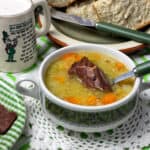 Pre-soak the evening before cooking:

To precook onions and garlic:

The day of cooking:

Do let us know how you got on with the recipe by leaving us a comment below.

Snapped a photo of your pea soup to share on social media?

So we can admire your great cooking.