If you haven't tried homemade mushy peas then your certainly in for a surprising treat.

Only a few simple ingredients are needed to prepare a batch of British mushy peas that will pair up beautifully with any meal.

But especially good with mashed potatoes, potato wedges, or fries along with a delicious pie or a few tasty veggie sausages. Oh and don't forget lots of veggie gravy!

This British mushy pea recipe is suitable for plant-based diets, vegans, vegetarians, gluten-free diets, everyone and anyone who loves delicious wholesome as well as budget-friendly food.

British mushy peas originated from the medieval pottage meal that sustained people from all social classes for hundreds of years throughout history.

A pottage meal is simply vegetables stewed very thickly with either peas, beans, grains (most likely oats and barley), and sometimes meat when available, along with whatever herbs and flavourings were at hand.

One such pottage meal is peace pudding which inspired the children's nursery rhyme:

some like it in the pot nine days old

Some variations of the rhyme state porridge instead of pudding. The rhyme referred to the medieval cookery act of having a continuous pot of porridge, pudding or pottage over the fire ready for meal times.

As the pot contents were eaten, more ingredients were added to the pot so that by the ninth day the pudding had been on the stove for nine days!

Peas were a common food during British medieval times so the addition of peas to the everyday peace pudding meal would have been more than likely.

For a medieval inspired vegan pottage recipe check this one we have on the blog which was created by my daughter who is a medieval history fan!

How do I store mushy peas?

Mushy peas can be stored within a covered container and placed in the refrigerator for up to 3 days.

Can I freeze mushy peas?

Mushy peas can be frozen for 3-4 months within a freezer bag or container.

Freezing the mushy peas in portion sizes will make it easier to pull out 1 or 2 servings.

Simply pop the mushy peas into a saucepan and reheat gently until piping hot.

Stir frequently and if necessary add a tiny bit of water to loosen up the peas but as the peas heat the sauce will become looser.

Do I have to use fresh mint for mushy peas?

Fresh mint leaves add a subtle but lovely mint flavour to the peas but dried mint can be used instead.

Or use a teaspoon or two of shop-bought jarred mint sauce such as Coleman's mint sauce.

What are marrowfat peas?

Marrowfat peas are dried peas that have been left in the field to mature and dry out naturally before being harvested.

Peas intended to be frozen are picked while they are young and smallish, then frozen quickly to retain the sweetness. In contrast as marrowfat peas have an extended time within the field they become larger and starchier.

Marrowfat peas are a common ingredient that can be sourced within most UK supermarkets and smaller grocery shops. They can be located on the same aisle as the dried soup mixes, dried lentils and dried split peas. And best of all marrowfat peas are very inexpensive.

Marrowfat or whole dried peas may be more difficult to source within the US or other countries but Amazon.com does offer Batchelor's Bigga dried peas selected marrowfats for sale which are perfect for preparing mushy peas.

Why do some mushy pea recipes result in bright green peas?

However, the green colouring is not required as the natural colour of the marrowfat peas is attractive enough especially when dotted with fresh darker green mint leaves.

Do I need to use a blender or masher to prepare mushy peas?

One of the beauties of mushy peas is that as they simmer away they naturally break down and become mushy.

Although soaking the peas in bicarbonate of soda does speed this process and help the peas to break up quicker and easier.

Do I need to add bicarbonate of soda to prepare mushy peas?

No, but it is traditional to soak the peas in bicarbonate of soda so if possible do so.

After soaking the bicarbonate of soda is rinsed away and fresh water is used to cook the peas.

However, if for some reason you can not have bicarbonate of soda then just soak the peas in water.

Although do keep in mind that the peas may require more cooking time to cook to the desired consistency.

What can I serve with mushy peas?

It is traditional to serve pies (pot pies) or fish and chips with a side of mushy peas which are especially popular orders within British fish and chip shops.

Any meal will be extra delicious with a scoop of mushy peas on the side.

* cauliflower or mushroom steaks and gravy or sauce 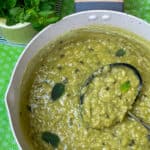