Vegan mushroom steak Diane is based on a classic retro dish and features juicy, meaty large flat or Portobello mushrooms cooked with shallots and garlic before stewing in an irresistible creamy, savoury sauce which is enriched with parsley.

The result is an exciting, creative dish bursting with plant-powered goodness and tastiness.

Perfect for brunch, lunch, dinner, or a side dish. Or add a creamy mushroom to your Buddha or power bowl for a classic touch.

Vegan mushroom steak Diane is a recipe inspired by the traditional retro steak Diane meal that probably originated in  New York during the 40 - 50s.

I say probably as the actual location is not generally agreed. Some even argue London was responsible for steak Diane or even Belgium.

However, during the 1950s in New York steak Diane was one of the most popular meals ordered. The chef would prepare the meal at the dining table adding brandy to the sauce before spectacularly flambéing the sauce with a lighter!

Naturally this technique was very impressive and contributed to the dishes popularity.

The name Diane refers to the Roman goddess of the hunt and protector of deer and other wild animals.

Creamy and peppery Diane sauces were common during the 19th Century, prepared with venison, and were dedicated to Diane.

Vegan mushroom steak Diane is perfect for celebrating Father's Day. Why not treat your kids plant-based or vegan dad to a steak Diane meal for Fathers Day?

Better still have the kids help to cook the mushroom steaks.

They may even enjoy learning about the history of the dish as they cook. I know my kids do.

Although mushroom steak Diane would be just as delicious for a Mother's Day brunch or simply for an everyday treat. In the UK Mothering Sunday is on the 27th March 2022 and on the 8th May 2022 in the US, Canada, Australia and New Zealand.

How do I store leftover mushroom steak Diane?

How do I reheat leftover veggie steak Diane?

Can I substitute the mushrooms for another ingredient?

What can I serve with mushroom steak Diane?

With a few considerations steak Diane is perfect for gluten-free diets.

Simply check that your veggie stock is gluten-free and that tamari soy sauce is selected over regular soy sauce as tamari is usually gluten-free.

Also check that your vegan Worcester sauce is gluten-free or replace it with two extra teaspoons of tamari.

Lastly do check all your ingredients packaging to be sure all ingredients are gluten-free. 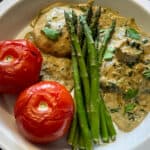