Enjoy a plate of this retro adapted meal for breakfast, brunch, light dinner or as a side dish.

Cabbage, potato and tempeh hash is so simple, yet wholesome and budget-friendly.

Hash meals were a popular wartime or Great Depression meal.

This veggie adapted hash is easily versatile as the tempeh can be easily replaced with tofu, mushrooms or creamy white beans. And the cabbage and potatoes can be any variety.

What is corned beef hash?

The definition of the word hash simply means food that has been chopped into small pieces and cooked together.

Corned beef is beef that has been cured using salt.

Corned beef hash is a meal that has been popular in the US for hundreds of years, and was traditionally prepared using leftovers of beef, potatoes, cabbage and onions. The word hash translates from French meaning to chop.

Hash meals prepared with meat, potatoes and vegetables have been in existence in Britain as far back as the 14th Century!

Subsequently corned beef hash became even more widely prepared as it was an economical, filling meal.

This recipe uses tempeh as a corned beef replacement.

Tempeh is produced by naturally fermenting whole soya beans and has been used as an important food source in Indonesia for over a thousand years.

For more information about the health benefits of tempeh check out this post by Healthline.com.

Tempeh works well in this recipe as it offers more texture, colour and flavour compared to tofu pieces. Although if I did not have tempeh I would use tofu or perhaps some tasty mushrooms or creamy white beans.

So feel free to sub out the tempeh for tofu! 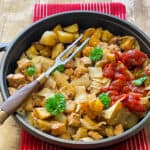 It would be wonderful if you could leave a comment below and let us know how you got on.