This easy and quick recipe for vegan Boston baked beans can be prepared on the stove-top and ready in less than 30 minutes.

Traditional Boston baked beans require at least a few hours of baking in an oven so a quick-cook on the stove-top saves valuable energy without sacrificing any of the irresistible sweet, smoky and rich molasses flavours.

Serve as a side-dish, or scooped over tasty toasted bread for a delicious lunch or light dinner. These tasty beans can be easily adapted for gluten-free diets.

Boston baked beans are essentially haricot or navy beans baked in an oven-safe pot with a lid, and flavoured with molasses with the addition of bacon, or more traditionally salt pork.

The origins of Boston baked beans date way back to the English settlers residing in the Massachusetts Bay Colony [1630-1691]. The settlers cooked beans over an open fire, within a sauce enriched with molasses and chucked in any salt pork or bacon they may have had available.

The colonists were influenced by the diet of the Native Americans and indeed it is claimed that the settlers got the idea to bake beans from the Indigenous Americans.

As the climate of the Americas differed from England, the settlers had to change their traditional recipes and adapt to the new crops that flourished within the new environment.

New England cuisine developed through the blending of Indigenous American diet and methods of cooking with the traditions and food the English brought over.

A New England tradition arose of cooking beans on a Saturday, often the beans baked all night long and was ready to enjoy on the Sunday Sabbath along with a slice or two of brown bread.

Nowadays, Boston, which is the largest city in the New England area is often affectionately given the nickname Beantown!

This recipe uses a few rashers of vegan bacon sliced into small pieces for flavour and texture. The vegan bacon used was This isn't bacon plant based rashers purchased from Asda [UK].

However any sliced cooked vegan bacon, sausages or burgers, smoked tofu or tempeh pieces, can replace the veggie bacon.

Or omit the vegan bacon and add a few teaspoons of liquid smoke at the end of cooking for that tasty smoky flavour.

Alternatively if preferred, instead of meat alternatives or liquid smoke, use a few teaspoons of smoked paprika and add along with the rest of the seasonings during cooking.

Saute the onion, garlic and vegan bacon pieces for 5-8 minutes.

Stir through the tomato paste.

Next tip in the brown sugar, molasses, mustard powder, and soy sauce. Season with a little salt and pepper.

Pour in the hot veggie stock and bring to a simmer.

Cook for 12-15 minutes until the sauce is rich and thick.

Check the seasoning and enjoy with a few slices of Boston brown bread.

Boston baked beans can be stored within the refrigerator for up to 3 days.

Or freeze for 3-4 months. Place the beans in the refrigerator to defrost completely before reheating.

To reheat Boston baked beans, place the beans into a non-stick pan and bring the beans to a simmer. Stir and reheat for a few minutes until piping hot throughout. A few tablespoons of water or broth can be added to loosen up the sauce if necessary.

Alternatively, reheat until piping hot using a microwave. Give the beans a stir half-way through reheating. Reheating in a microwave should only take a few minutes.

Are Boston baked beans safe for a gluten-free diet?

Absolutely. With a few changes Boston baked beans are perfect for gluten-free diets.

First ensure that the veggie stock is certified gluten-free, and use a gluten-free soy sauce such as Tamari.

If using vegan bacon or an alternative such as sliced veggie sausages then select a gluten-free variety.

Do I have to use haricot [navy] beans for Boston baked beans?

Haricot beans, or if your in the US these beans are known as navy beans, are the traditional bean used for Boston baked beans but any white bean can be used.

Do I have to use canned haricot [navy] beans for Boston baked beans?

Traditional recipes for Boston baked beans tend to precook dry beans before baking in flavoured stock for a least 2-3 hours.

As this particular recipe is a quick one, I have chosen to use canned beans rather than cook the dried beans on the stove top.

Although dry beans generally are more cost effective, I was also wanting to reduce the cooking time required so as to save cooking energy.

However, if preferred do cook your own beans. After pre-soaking, haricot beans usually need about 1-1 ½ hours of simmering, just follow the cooking instructions on the packet. Any cooked beans that don't get used can be frozen for future quick meals, so it may be worthwhile cooking the whole packet.

If time is an issue and you would like to use dried beans then a pressure cooker is a good way to quickly cook dried beans.

This process can be done many times and the thick syrup that is leftover minus the sugar crystals is called molasses.

There are different types of molasses available depending on how many times the sugar cane was boiled. The main varieties are light, dark, and black-strap.

Although most molasses have some health benefits, black-strap molasses are much more condensed as they have been boiled three times!

Black-strap molasses can be a useful source of minerals such as iron, copper, manganese and magnesium, as well as a source of antioxidants. Also, molasses is a traditional remedy for digestive problems.

A nice wedge of freshly baked bread or a slice of toasted bread and a big spoon is all that is required to enjoy a batch of Boston baked beans!

* a vegan pot pie or pasty

* a few vegan sausages and a big pile of peas!

Baked beans in a tomato sauce 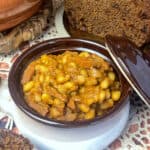 Print Recipe
This easy and quick recipe for vegan Boston baked beans can be prepared on the stove-top and ready in less than 30 minutes. Serve a dollop of smoky, sweet and rich baked beans on top of your favourite toasted bread for a tasty lunch or light dinner. Or enjoy as a side... along with anything really!
Course Dinner, Lunch, Side Dish
Cuisine American
Prep Time 10 mins
Cook Time 30 mins
Total Time 40 mins
Servings 4 or 6 smaller portions
Calories 253
Author Jacq

Pop a comment below and let us know how you got on. We love receiving your feedback.

So we can admire your good cooking.