Its so easy to prepare and you can have a pot ready in just under an hour which is perfect for busy days when you need fast flavourful food.

What is the difference between a chowder and a soup?

Chowder is a type of soup but is much thicker and creamier in texture. Whereas a soup has a thinner broth. Although it can be confusing as soups can be prepared as cream of whatever ingredient is being emphasised, which involves enriching the stock with cream or milk. However, a chowder is in general thicker and chunkier.

Chowder usually consists of a mix of vegetables, fish/seafood or meat that is cooked in a creamy, thick stock.

It is believed that chowder originated in England and France hundreds of years ago, when immigrants to America brought their recipes along for the journey to the New World.

Chowder quickly became a ship staple during the 17th-19th centuries and was enjoyed with hardtack biscuits. These biscuits were used to thickened up the chowder.

This type of hard baked wheat biscuit has a long-shelf life and needs to be softened up to be edible! Dunking in chowder was the perfect partnership for hungry sailors.

How do I store leftover chowder?

Leftovers can be stored in a covered container in the fridge for up to 3 days.

Or frozen in a freezer safe container for 3-4 months.

How do I reheat leftover chowder?

Pour leftovers into a non-stick pot and gently reheat until the chowder is simmering. Reheat for 2-3 minutes until piping hot. Don't fast boil and do stir frequently.

Is vegan potato, leek and corn chowder a gluten-free recipe?

It is easy to make this recipe for chowder gluten-free.

Simply use gluten-free flour to thicken the soup and ensure that your vegan stock is also gluten-free.

I usually use gluten-free flour to thicken chowder and all my vegan stock is always gluten-free as well, so it works!

What can I serve with vegan chowder?

Although it does depend on how hungry you and your family are!

- sandwiches such as this tasty vegan tofu mayonnaise sandwich

- tortilla/burrito wrap. An idea is this vegan coronation chickpeas and kidney beans wrap

For an oven-based method for crispy kale:

* Wash and dry the kale. Remove any extra tough stalks.
* Once dry lay the kale out on a baking sheet and bake at about 180 Fan/200 Celsius/Gas 6/Fahrenheit 400 for around 10-25 minutes until crisp.
* You will likely need to turn the kale half way and check it carefully as it can burn really easily. Although my daughter seems to like the charred bits!
* Any seasonings can be mixed through through the kale before baking such as paprika, garlic powder, onion powder, mixed herbs, Cajun/fajita/barbecue/potato dry seasonings, etc.
* For a salt and vinegar batch of kale add a few tablespoons of apple cider vinegar or balsamic and a sprinkling of sea salt.

- For a fun, historical recipe why not prepare some hardtack which is an 18th Century, ship-biscuit. Hardtack is an authentic accompaniment for chowder and it can be stored in a jar for many months!

Do you have any interesting ideas on what I could use as a garnish for potato chowder?

a scoop of vegan cream cheese

Any substitute ideas for potato, leek and corn chowder?


stirred through the chowder
or vegan soft cheese

How To Prepare Vegan Potato, Leek and Corn Chowder: 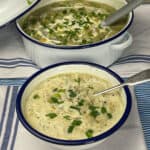 Optional, add to each bowl before serving