This classic Scottish potato soup is perfect for budget-friendly tasty meals as only a few inexpensive pantry staples are required. So delicious.

Most countries around the world have their own tasty versions of potato soup as historically potatoes have been such a successful and economical veggie crop that have the potential to grown almost anywhere with not much effort.

Potatoes were being cultivated as an agricultural crop in Scotland by around the mid 1700s but richer Scottish folk were already enjoying potatoes since the 1600s.

Potatoes soon became a valuable and dependable crop for poorer Scots and when the potato famine struck in 1845 Scots were adversely affected, but not to the same tragic degree of their Irish neighbours.

For more information about the Irish potato famine do have a look at our Old-fashioned Irish potato soup recipe post.

Adding potatoes to soup and stews created a cheap but sustainable meal that provided lots of cheap, valuable, wholesome nutrition.

Contrary to many popular beliefs, white potatoes are naturally fat-free and do contain valuable nutrition. Among many other benefits, potatoes are a good source of antioxidants, provide a good doze of vitamin C, B vitamins, and are a great source of dietary fibre.

Nowadays, potatoes are very much ingrained into the Scots diet with many much loved national dishes incorporating potatoes.

Scottish potato soup is incredibly simple to prepare and it is the humbleness of this soup that results in its deliciousness.

However, if preferred do treat this recipe as a foundation for other tasty soupy concoctions. Such as add extra veggies, herbs, and perhaps some cooked or quick cooking pulses or grains, to the soup for endless variations.

First melt the margarine [or alternatively heat ½ cup of veggie stock] within the soup pot.

Add the onions and cook for about 5 minutes.

Chuck in the carrots and cook for a further 3 minutes.

Pop in the potatoes along with a bay leaf.

Season with a little salt and pepper.

Pour in the hot veggie stock/broth.

Bring to the boil and simmer for 20-25 minutes until the veggies are soft.

Dish up with fresh chopped parsley or your favourite herb. Extra pepper is also tasty and add a pinch of extra salt if necessary.

A slice or two of wholemeal bread or a few crackers for soup dunking is a nice accompaniment.

Potato soup is best stored within the refrigerator and will keep fresh for up to 3 days.

Or freeze for 4-6 months. Defrost completely before reheating.

To reheat potato soup, pour the leftovers into a saucepan and bring to a boil. Reduce the heat and simmer for 1-3 minutes until piping hot. Give the soup a stir every now and again. If necessary a little extra water or stock can be added to the soup before reheating, especially if you wish to stretch one portion of soup into two portions.

Or reheat the potato soup by using a microwave, stir a few times, and reheat until the soup is piping hot throughout.

Can anything else be added to this potato soup recipe?

Other ingredients are generally not necessary for this tasty potato soup recipe but of course extras can be added for variety. Or if you have the odd veggie languishing within the refrigerator that would benefit from being chucked into the soup pot, then do so..

* add a ¼-1/2 cup of quick cook rice along with the potatoes. Or if a wholegrain, brown, black, or red variety of rice is preferred consider the increased cooking times and perhaps pre-cook the rice before adding to the soup

* a cup of diced turnip/swede/rutabaga is a tasty addition

* chuck in a diced parsnip or two

* a ½ cup of diced celeriac is also yummy

* a few diced or minced garlic cloves are perfect for fortifying the soup with plant goodness, especially beneficial during the chilly months to help keep viruses and cold bugs at bay

* any fresh or dried herbs can be added along with the potatoes, such as parsley, lovage, dill, fennel, thyme, rosemary, sage, oregano, mixed dried herbs, etc [although do consider how each herb will change the flavour of the finished soup]

* fancy a curry flavoured soup? Add a few teaspoons or a tablespoon of your favourite curry powder at the same time the potatoes are added to the soup

Can any of the ingredients for potato soup be substituted?

Any substitutions will change the overall flavour and perhaps name of the finished soup but seeing as the completed soup is yours, feel free to modify any of the ingredients to your own preferences and needs.

* replace the potatoes for celeriac

What can be used to garnish potato soup?

Even though potato soup is so simple and easy to prepare, a nice garnish can elevate the humble soup to something that is perfect for dinner parties, family get-togethers, and other special meals.

This recipe generally only needs a few tablespoons of fine chopped parsley as the flavour of this herb goes really well with the potatoes. Although the following ideas are also worthwhile:

* a tablespoon or so of shredded vegan cheese

* a sprinkle of red pepper/paprika flakes or chilli flakes

* a dusting of paprika

* toasted or plain sunflower or pumpkin seeds [can be done simply by dry frying, for a few minutes, in a small pan until browned in places, add a pinch of salt for extra flavour. Shake the pan often to prevent burning. Sunflower seeds compared to other seeds or nuts tend to be inexpensive, so its worthwhile purchasing a bag for toasting and adding to soups for extra nutrition. Or even just eating for a filling snack]

* a sprinkle of vegan bacon bits/pieces

What is the best potato to use for potato soup?

Honestly the best potato for potato soup is whatever variety of potato that you have to hand.

Although some potato types may loose some texture whilst boiling particularly the types used for mashed potatoes, it really won't affect the finished flavour or wholesomeness of the potato soup.

However, if you do prefer your potatoes to retain their integrity and be soft but firm at the end of cooking, choose a potato variety such as new/baby potatoes, charlotte potatoes, Yukon Gold, Maris Piper, red potatoes, russet potatoes, ordinary white potatoes, etc.

The type of potatoes that were used for this Scottish potato soup recipe was Carlingford and were grown at my daughters Scottish allotment plot. Carlingford potatoes are meant to be a salad potato but they were firm, creamy and perfect for this soup recipe.

Whatever potatoes are used for this potato soup, do retain the skins if possible and if unblemished, as they contain valuable nutrition. Just scrub the skins gently until nice and clean.

Image below: The large potatoes are Carlingford variety whilst the couple of smaller ones are an unknown variety! Both home-grown at my daughters allotment plot. 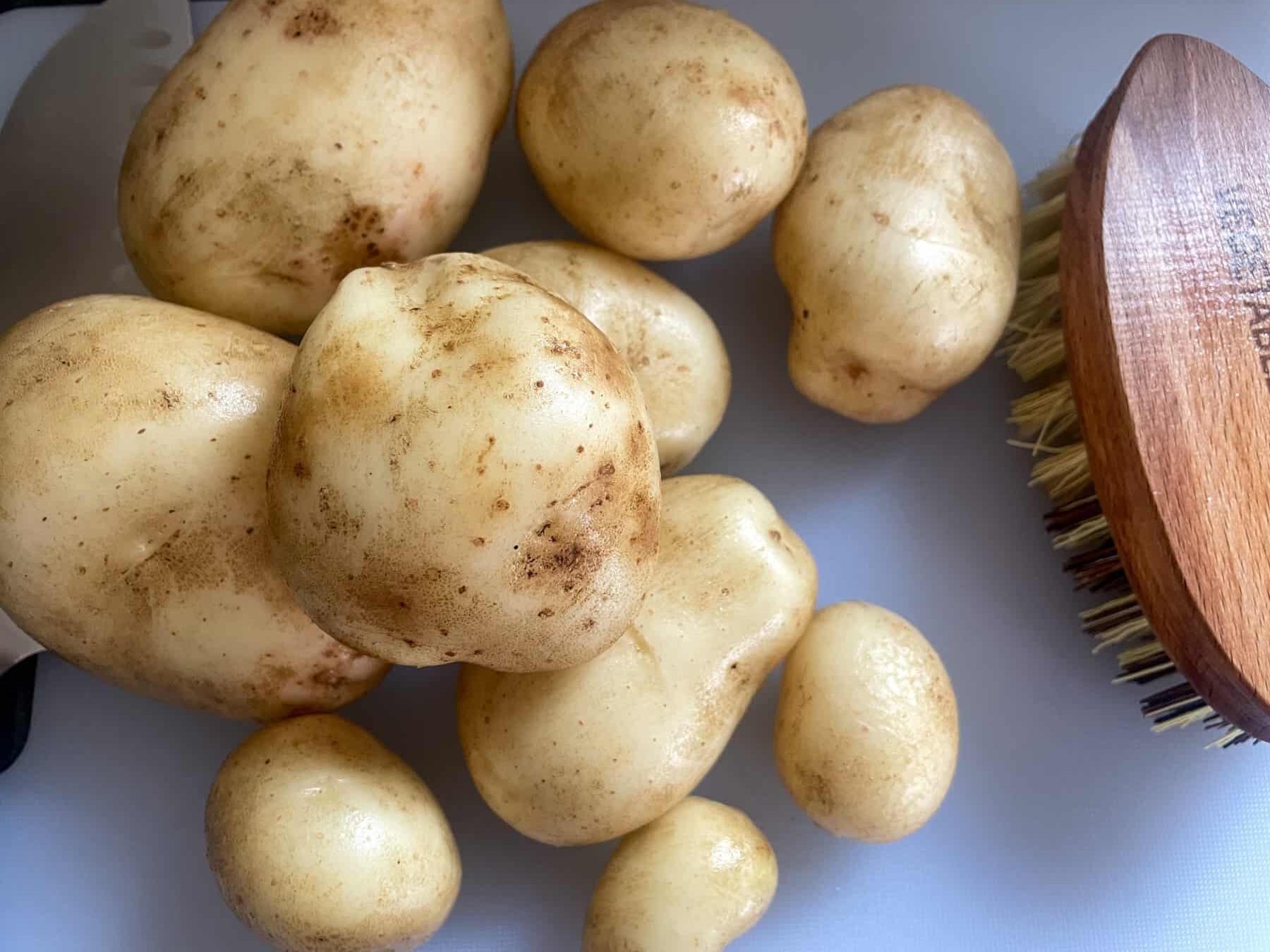 Is potato soup suitable for a gluten-free diet?

Simply ensure that the vegetable stock or broth used is certified gluten-free and if using vegan margarine or butter also check that it is free from gluten ingredients.

Potatoes are so cheap, wholesome and delicious that they feature frequently in my Scottish family's meal rotation. Hence why there are so many soups here featuring the humble potato: [and many, many more to be added!] 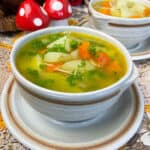 It is one of our family's favourites so we would love to hear what you thought of it too! Do leave us a comment below.

Snapped a photo for social media?

So we can admire your good cooking.

All the best Jacq x