This old-fashioned creamed corn soup is a bowl of liquid savoury delicious sunshine. So easy to prepare and just a quick blend to cream all the tasty sweetcorn into a thick, creamy flavour-packed soup.

Creamed corn soup is the perfect way to use up inexpensive summer corn, or to utilise a bag of frozen sweet corn from the bottom of the freezer bringing it back to life with this recipe.

This creamy corn soup recipe is prepared with all vegan plant-based ingredients and is simple to adapt to a gluten-free diet.

Serve as an easy starter or for lunch or a light dinner.

Creamed corn is a dish that involves blending sweetcorn kernels with milk or cream.

Creamed corn is said to have origins in traditional Native American cooking and is a now part of Mid Western and Southern American cuisine.

Creamed style sweetcorn is also popular in many Asian countries including Thailand and China.

Recipes for creamed corn and corn soup were popular during the early 1900s in America especially during the 1930s Great Depression Era. Depression Era recipes featured creamy corn prepared as a chowder and even a soup which featured the empty corn cobs as the basis for a broth.

How To Prepare Creamed Corn Soup

This tasty easy soup can be prepared with either frozen, fresh or canned sweetcorn.

Melt the vegan margarine or heat a little veggie broth, and cook the onions and garlic for 5 minutes.

Pop in the sweetcorn and cook for 3 minutes.

Stir through the flour and cook for 1-2 minutes.

Pour in the hot veggie broth and sprinkle in a few pinches of salt.

Bring to a simmer and cook for 20 minutes.

Give the soup a good stir and remove from the heat.

Pour in the plant milk.

Season with a pinch or two of white pepper and add extra salt if necessary.

Garnish with whole sweetcorn kernels if liked, and some chopped chives.

Store within a covered container and place in the refrigerator for up to 3 days.

Can creamed corn soup be frozen?

Place the soup into a non-stick pot and gently bring to a simmer. Reheat for 2-3 minutes, but be careful not to boil rapidly as the milk may split. However, if the milk does split simply stir well and it will be fine.

If preferred add extra plant milk to the soup to thin it down or create more portions.

What can I serve with creamed corn soup?

For more tasty vegan soup recipes that feature sweetcorn have a look at this Fake-Away Chinese 'chicken' And Sweetcorn Soup, and this delicious Potato, Leek And Corn Chowder, and my kids favourite Mexican Noodle Soup [with Black Beans And Corn]. 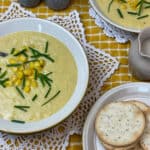 Do let us know how you got on and leave us a comment below.