This three ingredient vegan Christmas Cake is super simple and easy to prepare. Perfect for when you really need a Christmas or an everyday fruit cake but are short of time, ingredients, finances, have unexpected guests, or just want a tasty quick fruit cake.

Although the basic vegan Christmas cake has just 3 ingredients, vegan chocolate milk, dried fruit and self-raising flour, it can be jazzed up with some festive spices such as cinnamon, ginger, nutmeg or mixed spice.

This cake is not heavy like a traditional fruit cake instead it is deliciously light, with similar textures and flavour comparable to a Soreen malt loaf. Perfect for kids and those who are not too keen on Christmas cake.

This vegan fruit cake recipe is also perfect as a base for an Easter fruit cake or traditional Easter Simnel cake.

Christmas cake evolved from a kind of British medieval simple plum porridge prepared with oats. On Christmas Eve religious folk would fast until Christmas Day where the first meal would often begin with a bowl of plum porridge.

At some point dried fruits and spices were also added to the plum porridge which created more of a pudding popularly known as figgy or plum pudding.

By the 1700s Christmas pudding had evolved into a firmer cake with the addition of flour and eggs. These baked Christmas cakes tended to be decorated by richer folks with marzipan or icing.

Nowadays in the UK Christmas cake is traditionally served near the end of Christmas Day if anyone has any room after the large Christmas dinner, followed by Christmas pudding, then a short while later cheese and biscuits, and possibly a sandwich!

Although in my Scottish household we generally don't have the capacity for all that food instead preferring to enjoy our Christmas cake as part of our traditional New Year's Eve buffet.

How do I store 3 ingredient Vegan Christmas cake?

Store wrapped in parchment paper and a second layer of kitchen foil and place in an airtight container for at least 7 days possibly a few days longer.

This cake will not last as long as a regular Christmas cake as it contains less sugar and no alcohol which both tend to act as preservers.

Why not prepare this cake on Stir-up Sunday the traditional day for baking Christmas cakes and puddings where everyone in the family takes a turn to mix the cake batter whilst simultaneously making a festive wish.

As this cake keeps fresh for less time than a regular Christmas cake simply freeze after it has baked and cooled, and then defrost a few days before Christmas and add vegan marzipan, icing or decorations if using.

Store in the freezer well wrapped in parchment paper and second layer of kitchen foil, for 3-4 months.

Can I sub out the plant-based chocolate milk for a different liquid?

Although do ensure that your beverage of choice has some sort of sweetness as if not the cake may not be sweet enough. And take into consideration that this change in ingredient will affect the cakes overall flavour.

I know that this is a 3 ingredient cake but could I add anything extra?

Nothing extra really needs to be added but I do recommend adding some festive spices if the cake is intended for Christmas, such as (although not all at once!):

What can I serve with 3 ingredient vegan Christmas cake?

* vegan hot custard, I have an easy recipe for custard over on my vegan school dinners jam sponge post
* vegan whipped cream (Asda, UK, does a whipped squooshy plant cream in a tall can in the chilled section)
* vegan single pouring cream (such as Elmlea plant single cream)
* homemade whipped coconut cream (from a can of full fat coconut milk, chill the can overnight and remove the thick cream, reserve the liquid for a curry, stew, smoothie)
* homemade sweet cashew cream (blend soaked cashews with some dates)

It may not be traditional but a slice of this cake with a little vegan butter or margarine spread over the inside of the wedge is actually very tasty. Similar to a Soreen malt loaf.

Can I decorate this vegan Christmas cake with marzipan?

Simply source a vegan marzipan and use to add a tasty festive addition to the Christmas cake. Check out this video from BBC good food for a method for covering a cake in Marzipan. Use any leftover marzipan to form little Christmas figures. 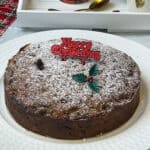