This vegan adapted old-fashioned Irish potato soup recipe originates way back to the antique era of the 19th Century!

Old-fashioned potato soup is such a tasty, simple and amazingly budget-friendly recipe adapted from 'The Whitehouse Cook Book' [by F. L. Gillette and Hugo Ziemann] dated 1887.

Potatoes are so delicious especially when prepared into a creamy, comforting, nourishing soup that only costs pennies per pot full, and is guaranteed to happily fill up hungry tummies whilst simultaneously warming the body and soul.

Serve with wedges of warm wholewheat bread for extra wholesomeness that the whole family will love.

Potatoes were first cultivated in the Andes, South America more than 7000 years ago.

Sometime during the latter years of the 16th Century potatoes were brought over to Ireland but who exactly was responsible for the introduction is not clear.

Potatoes soon became a very popular inexpensive crop especially with the poorer members of Irish society who leaned heavily on the potato for valuable nutrition.

However the reliance on one vegetable crop was not ideal as when the potato crop succumbed to a disease, the Great Irish Famine or the Irish Potato Famine [1845-1852/55] was the terrible outcome.

The result of the famine included millions of Irish people having to rely on soup kitchens in order to prevent starvation, at least 1 million people dying, and about 1.5 million Irish immigrating to America.

Despite the Great Famine, the potato remains an important food for The Republic of Ireland [southern] as well as the separate Northern Ireland region, with an abundance of delicious potato recipes, and many different variations of potato soup.

The current recipe for Irish potato soup was adapted from an old recipe I found within the The Whitehouse Cookbook which was published in 1887 by the American author Mrs F.L Gillette.

As many Irish immigrants moved to American during the Potato Famine there would have been many traditional Irish recipes introduced to America which would have likely influenced Gillette and the recipes she included within her cookbooks, or perhaps she even had Irish descendants.

I have replaced dairy milk with plant milk. The type of plant milk that I used was oat milk [Co-op GRO The Oaty One brand]. For butter I used Flora dairy-free margarine.

There are no actual measurements for the original recipe, other than '8 medium potatoes, 'a lump of butter', 'a large onion', 'some herbs', and with instructions to 'thin it with rich milk'.

Also I mashed the cooked potatoes instead of 'pressing through a colander'. Although I am sure the different method achieved similar results.

If preferred the potato soup can be blended with an immersion stick blender or similar, which would achieve a much smoother soup.

This vegan potato soup recipe is so easy, quick and budget-friendly. If you have potatoes, an onion, plant milk and some seasoning, then a delicious wholesome meal can be achieved with not much cooking on the stove-top.

As soon as the potatoes have cooked the soup is practically ready, except for a little reheating after the cold milk is poured in.

I have used dried mixed herbs but really any dried or fresh herbs can be used for this Irish potato soup recipe, just chuck in whatever you have to hand.

Instead of simply cooking the potatoes in water, I choose to cook in veggie stock/broth for extra flavour. However, if you don't have vegetable stock then just use water.

Vegan Irish potato soup is a creamy soup similar to a traditional chowder but with less ingredients and fuss! A bowl is extremely satisfying and comforting, and so warming especially good for inexpensive family meals.

If you try this amazing vintage Irish potato soup then I would love to know how you got on. Do pop back and leave us a comment below.

How To Prepare Irish Potato Soup

How do I store leftover Irish potato soup?

Leftover potato soup can be stored within the refrigerator for up to 3 days.

Can I freeze Irish potato soup?

How do I reheat Irish potato soup?

Place the potato soup into a non-stick pan and add extra plant milk if required to loosen the soup up.

Very gently bring the soup to a boil, stirring frequently, but don't fast boil as the milk may split.

Once the soup is at the boiling point it is ready to enjoy.

Is this potato soup recipe gluten-free?

It is easy to prepare this potato soup recipe as free from gluten ingredients.

What can I serve with potato soup?

What variety of potatoes are best for soup?

Any variety of potatoes that are high in starch and good for mashing or roasting are perfect for potato soup.

***For a delicious change try this potato soup recipe with sweet potatoes. Surprisingly, during the 18th and 19th Century sweet potato recipes were very popular in Britain.***

Can I blend Irish potato soup instead of mashing?

My family prefers the additional rustic texture that simply mashing the potatoes with a potato masher brings, so I tend not to blend the soup.

However, if a smoother, silkier soup is preferred then use a stick or immersion blender and give the soup a little whizz just until blended.

Don't blend too much as the potatoes could become too gloopy or gluey if too much starch is released.

Do I have to add the vegan margarine to the soup?

Many people follow a no-added fat plant-based diet and prefer to not add ingredients such as margarine or vegan butter to their meals.

Instead of the margarine, replace it with one tablespoon of white miso paste and ensure the miso is fully incorporated and mixed into the soup.

Or add a few tablespoons of nutritional yeast flakes at the same time as the margarine is added.

[White miso paste can be found in most health/wholefood stores, and is also available in Asda, UK supermarkets.

Nutritional yeast flakes can also be found in most supermarkets and wholefood stores.

Both ingredients may initially cost a few pounds but they will be able to be added to many more meals and can give inexpensive meals a flavour and nutrition boost.] 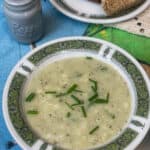 Do pop back and let us know how you got on. We love reading your comments and feedback.